*Update* Pictures of the D800 on Nikonrumors.com

During the night (the German night, daytime in the US :-)) NikonRumors published a front and back shot of the new D800 body (thank you to Peter from Nikonrumors.com for letting me use these images !). 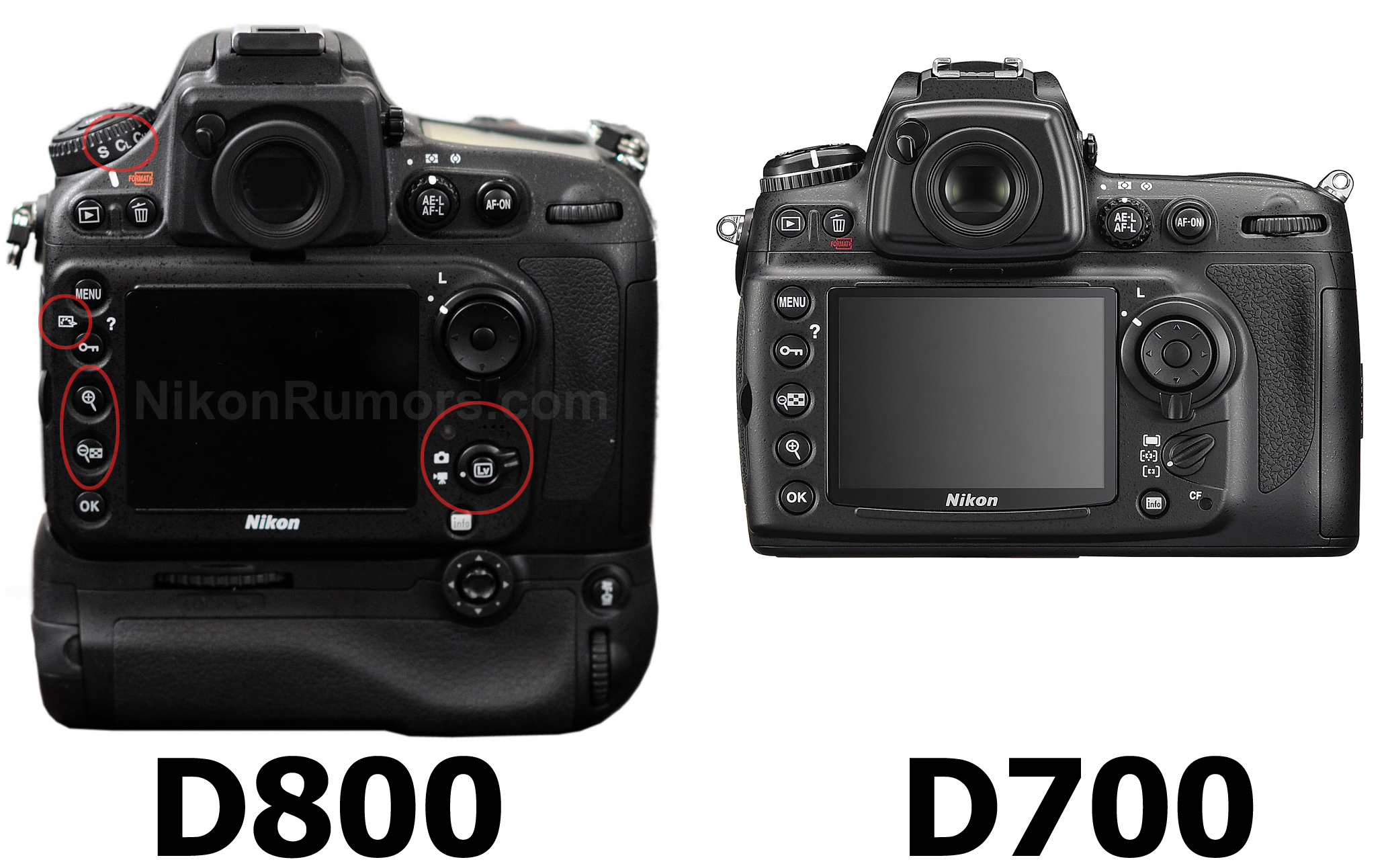 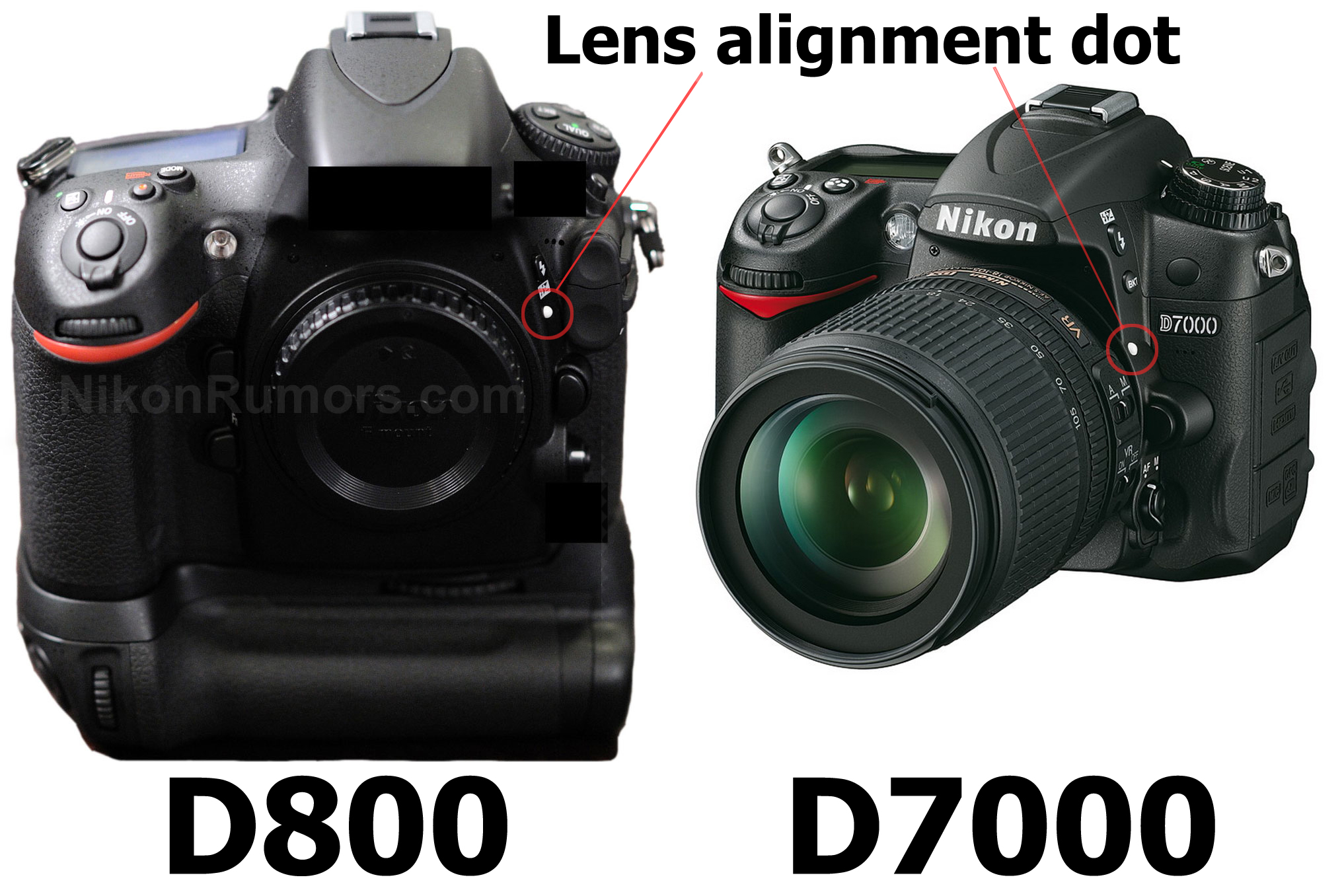 The images show the D800 body with a battery grip attached (I hope the MB-D10 fits…).

***UPDATE*** No, the batteries of the D800 and other Nikon models will not be compatible due to a new law in Japan concerning the safety of batteries. Read the story here.

It seems like the images were taken with a wide aperture, since the details on the battery grip are not completely sharp. The camera appears on a neutral background (white), but it seems as if it has been shot somewhere else and then photoshopped on a white background afterwards. When looking closely you can see that the masking on the top left part of the front view pictures is not 100% accurate. It is interesting that the Nikon logo, model name and the “FX” logo at the bottom fight side have been covered with a black rectangle. Nikonrumors won’t comment on that. It is assumed that the images show a pre-production model which has distinctive markings and that these markings could reveal the source.

(Side note: I would not be surprised if these “leaked” images of the camera were actually given away with Nikon’s permission. I mean, it is free publicity and the customers are aching to get that new product).

Concerning the front of the camera two novelties can be seen. At first there is a “record” button (round button with a red dot, next to the shutter button). We already know the D800 will have video capability (the D700 has not, the D300s, which has been announced after the D700, has). I am quite curious about how the D800 will perform as a video camera. At all, full 1080p HD video (24-30 fps) and 720p (24-60 fps (slow-mo !)) has been announced at Nikonrumors. Therefore the three holes for the internal mic are also not a surprise (front right, next to the flash sync socket).

Just below the flash-pop-up-button is a white dot. With a high Probability it is the dot which indicates where to align your lens when mounting it, but usually that white dot is directly at the mount.

***UPDATE*** At first I thought it might be a button because the white dot is so far off the mount. After a comment from Rob G I checked the D7000 more closely and discovered that the lens alignment dot on this camera is also a little behind the mount at the side due to spacial restrictions. So with a high probability I assume this is just a marking, see below comparison between (what appears to be) the D800 and the D7000.

That’s pretty much what you can tell from the front of the camera. However, the back of the camera also shows some changes.

The most noticeable change is the loss of the AF area mode selector. The lever has been converted to a video/photography selector. The center of the lever has been outfitted with an additional button for Liveview. The integration of the selector switch indicates that the video feature will be quite prominent in the D800. From the pictures I can not tell if the AF area mode selector has been removed completely from the body. It will be interesting to see how AF area mode will be chosen on the D800 and how the video/photography selection has been implemented.

As a comparison: The D300s has an AF area selector and no dedicated video switch. To record video on the D300s, push the Liveview-button and start recording with the thumb button (the one which is in the center of the selector switch which has the “L” marking). This way the video function can be accessed very quickly. Therefore from just looking at the camera I can’t see the advantage of having a dedicated selector. But let’s wait how the camera actually works. Perhaps it will sport some neat video features in the software which give the selection lever a deeper meaning.

Above the video/photography selector holes for the video playback speaker have been incorporated.

I really would like to know where the AF area mode switch has gone to. I hope it is not software-implemented now. I hate browsing menus.

Apart from that the design changes at the back of the camera are minor. The “+” and “-” buttons on the left side have switched positions in comparison to the D700, for whatever reason. Interesting is also the “Picture control” symbol which is next to the button labelled with a key. Picture control is a way to individualize the look of your images. You can create a set of saturation, brightness, hue etc. values and apply them to your images. In the D300s you can change the picture control sets by accessing the menu, now you seem to have a dedicated button for that on the D800. I am not too impressed about that, since I never used picture control so far. Another minor change is the labeling of the shooting modes (top left). While the markings on the D700 dial were located on top, they have moved to the side now. This is likely to be related to the fact that the D800 body is supposed to be a little more compact in dimensions compared to the D700. Moving the labeling to the side saved some space.

Summary: The images which have been leaked, assuming they are real and not fake, do not show a revolutionary change in the D800’s body design. Some controls have moved, a button has been added (record) and the camera now has a mic and a loudspeaker. This is not surprising since it was clear that the D800 will have video functionality. It can be assumed that the real revolution, if there will be one, will take place inside the camera. Perhaps the sensor is something very new, perhaps they tweaked the software performance up noticeably. The 36 Megapixel sensor is discussed vividly, and from my point of view this will be the most interesting part about the D800 – whether it will be “just” a high MP sensor or if something else is connected to the 36 MP issue. We will know once the camera has been announced officially.