Last week I got the opportunity to shoot a Porsche GTS. I never shot cars before and this was quite a challenge. I practiced on our car at home, shooting it in the carport. Finding a pleasantly looking perspective did not prove to be a challenge but I experienced that lighting a car with  speedlights is hell when you are doing it for the first time.

I learned a lot during the Porsche shoot and despite some rookie-bloopers the outcome is somewhat presentable. 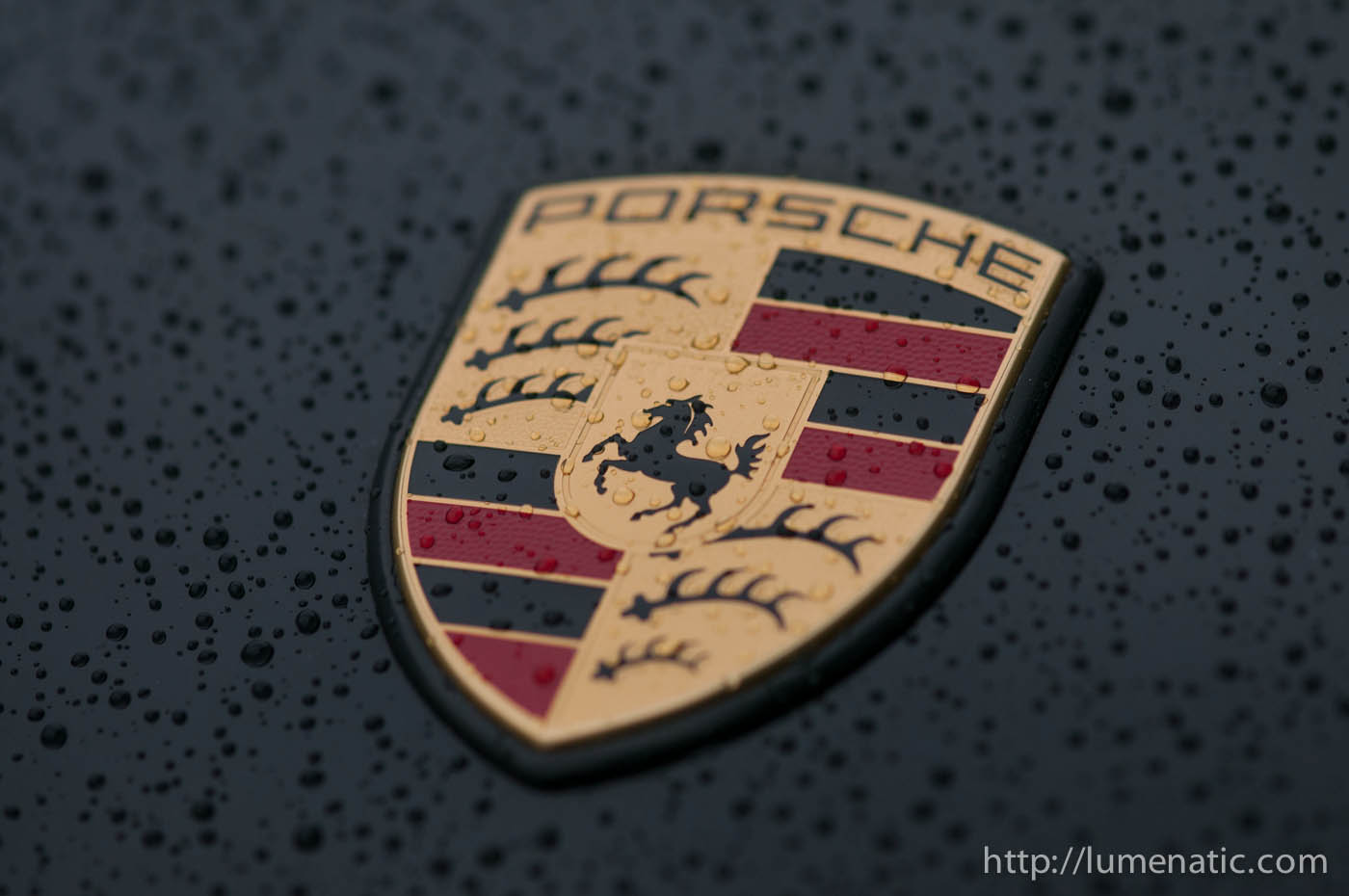 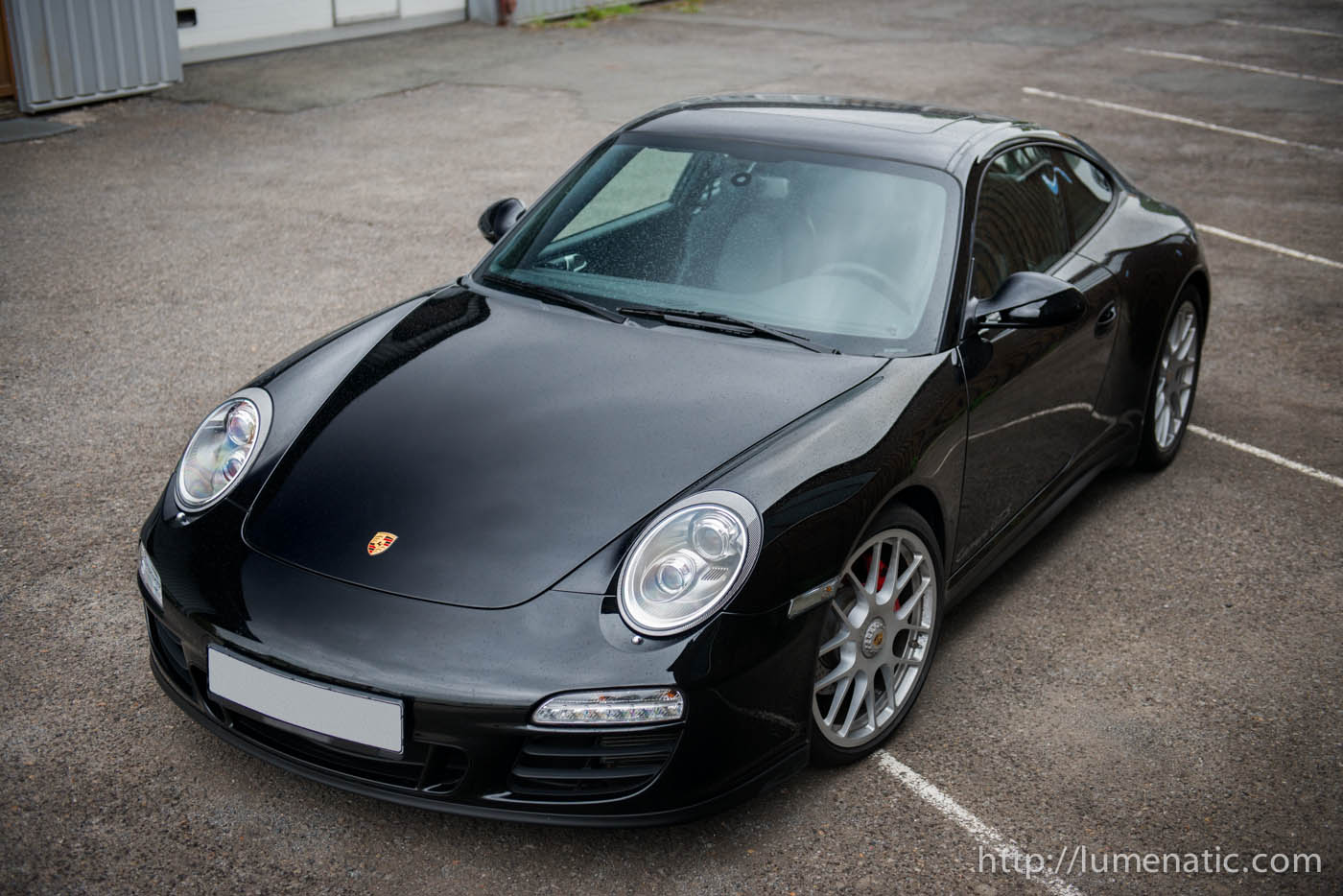 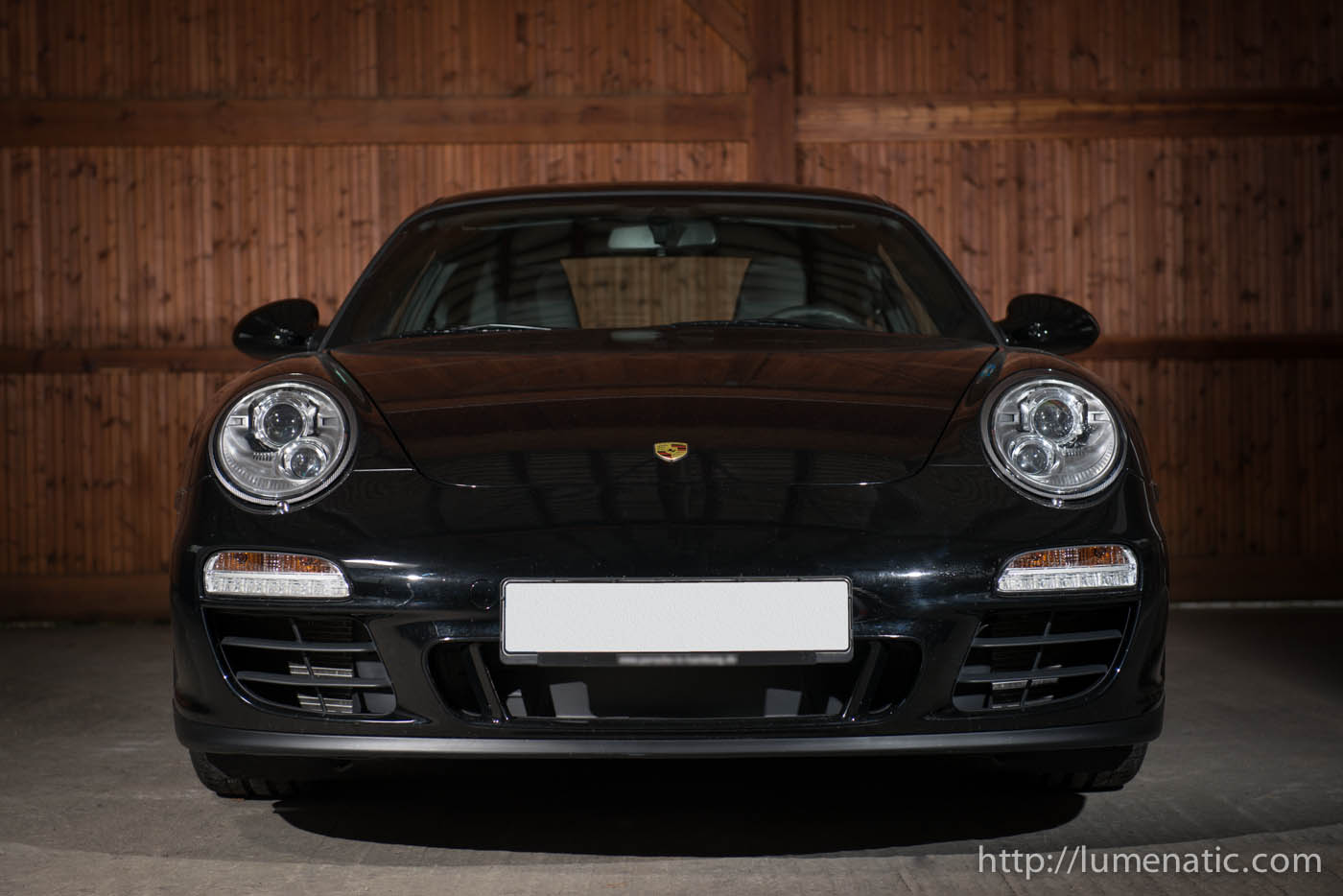 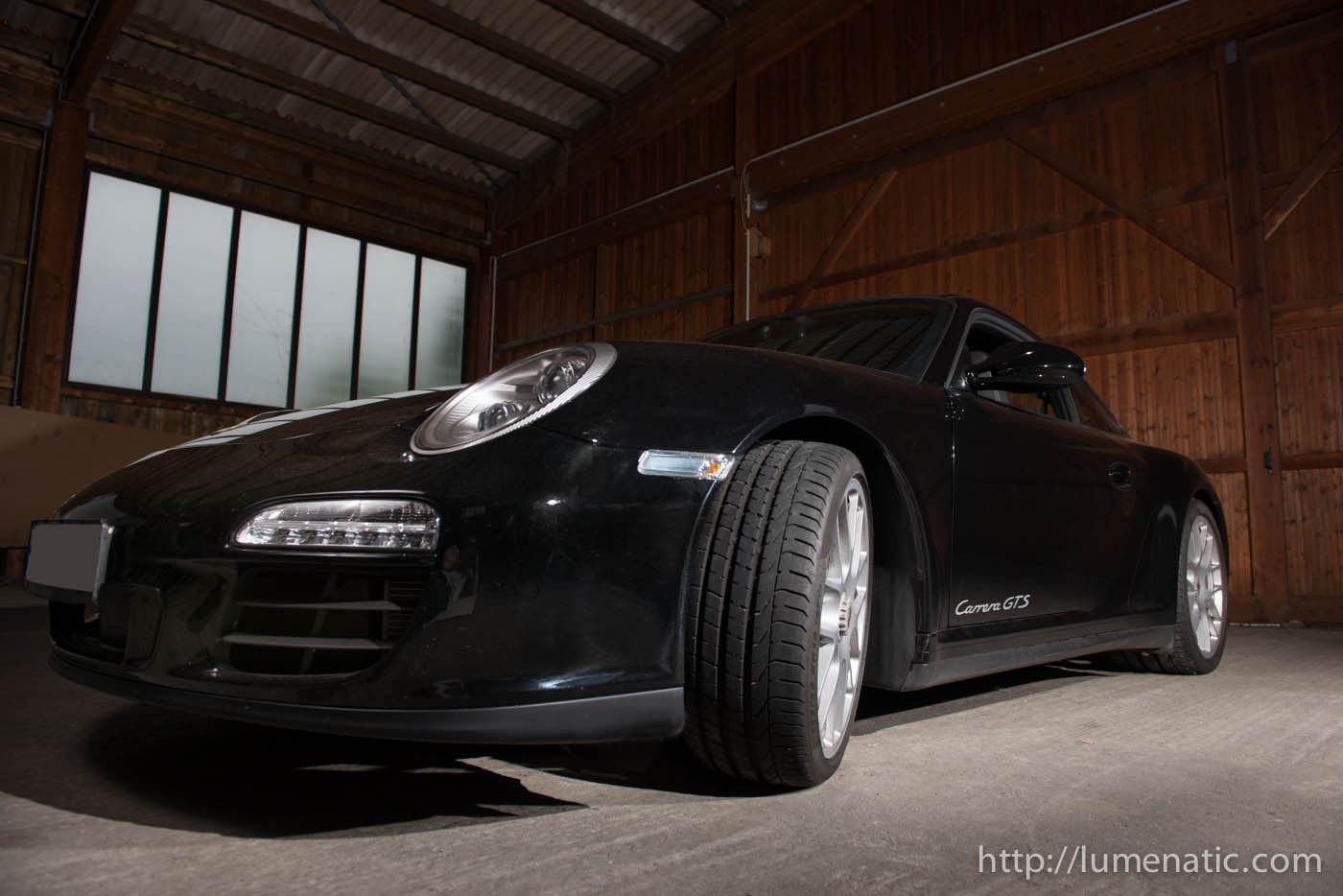 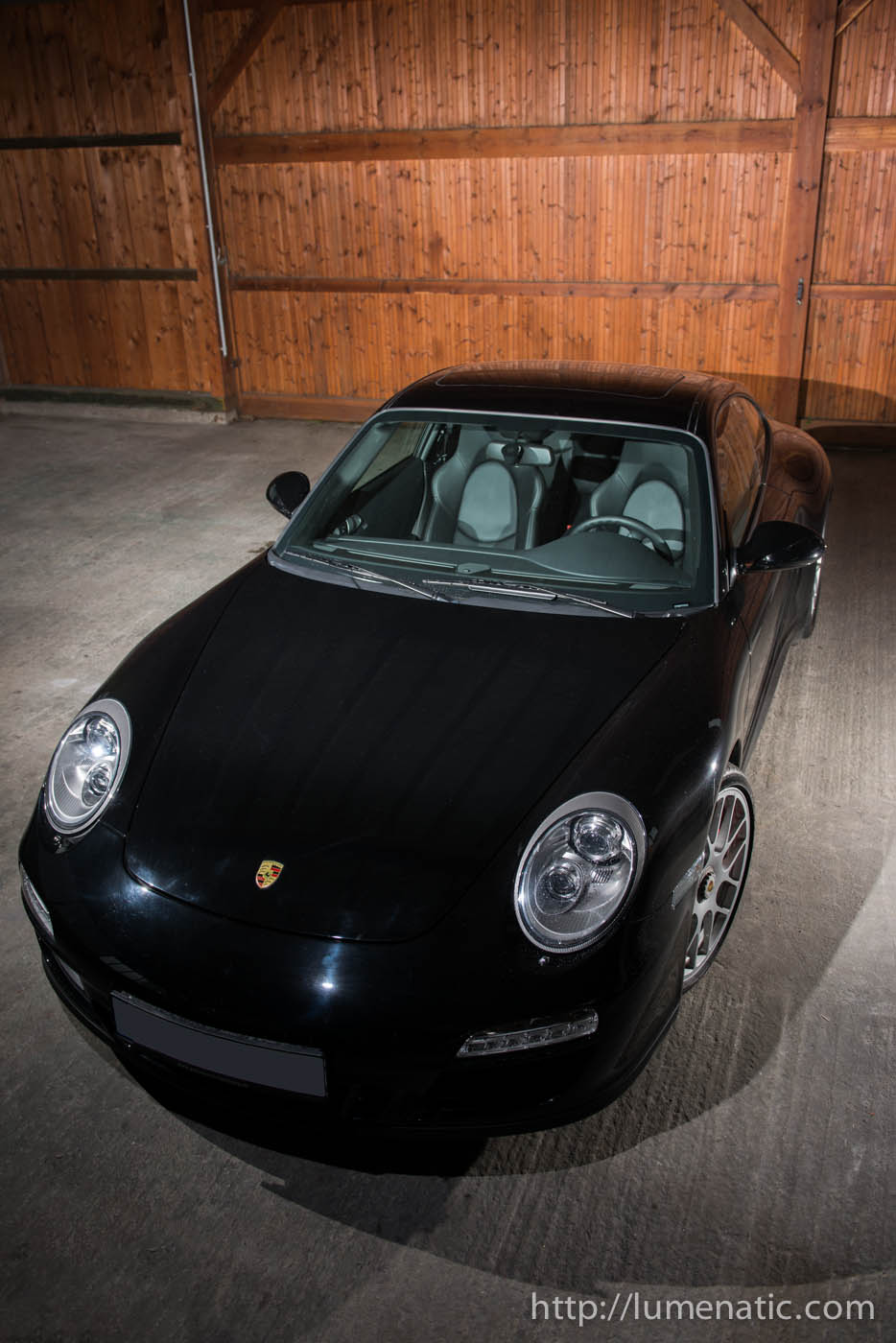 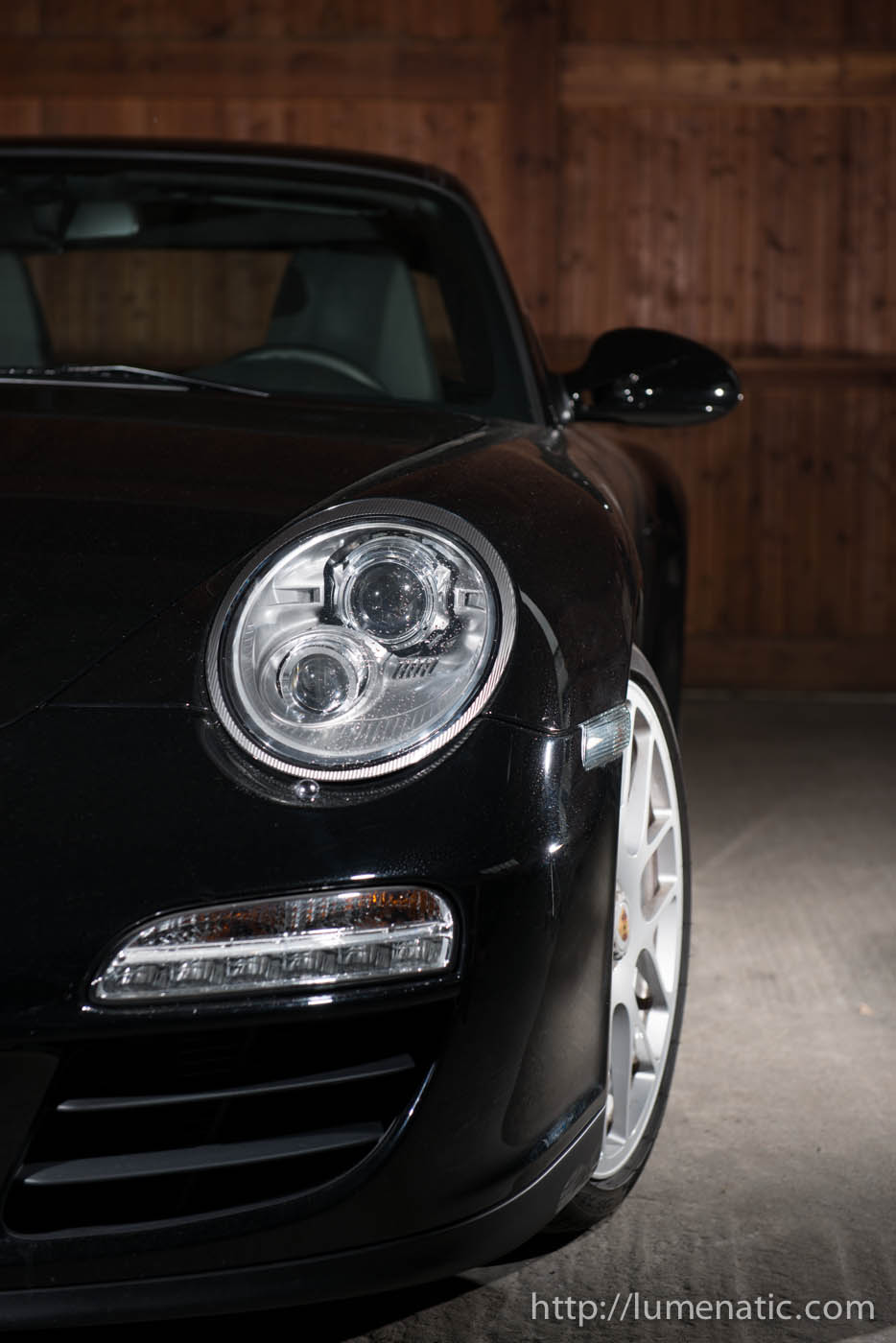 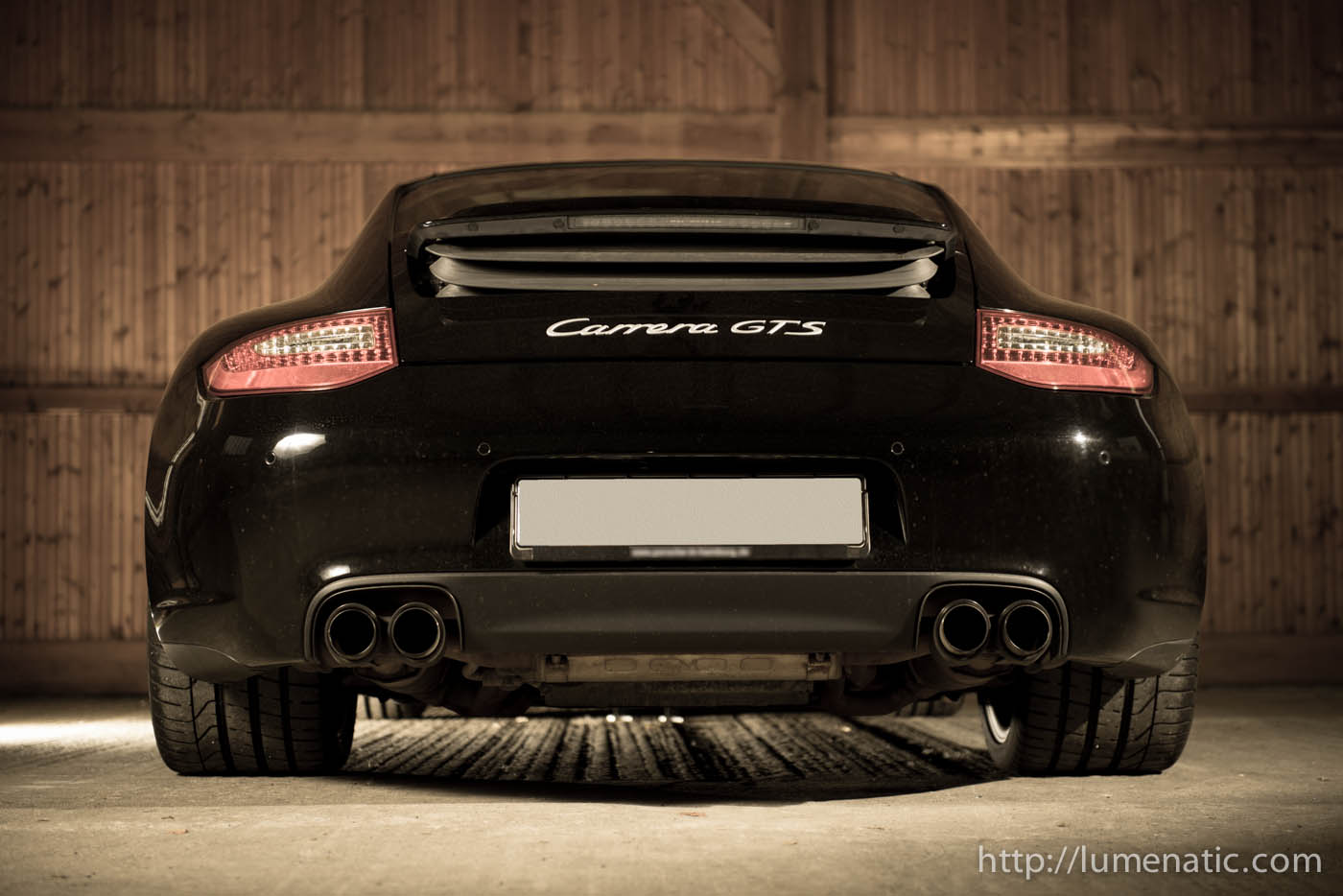 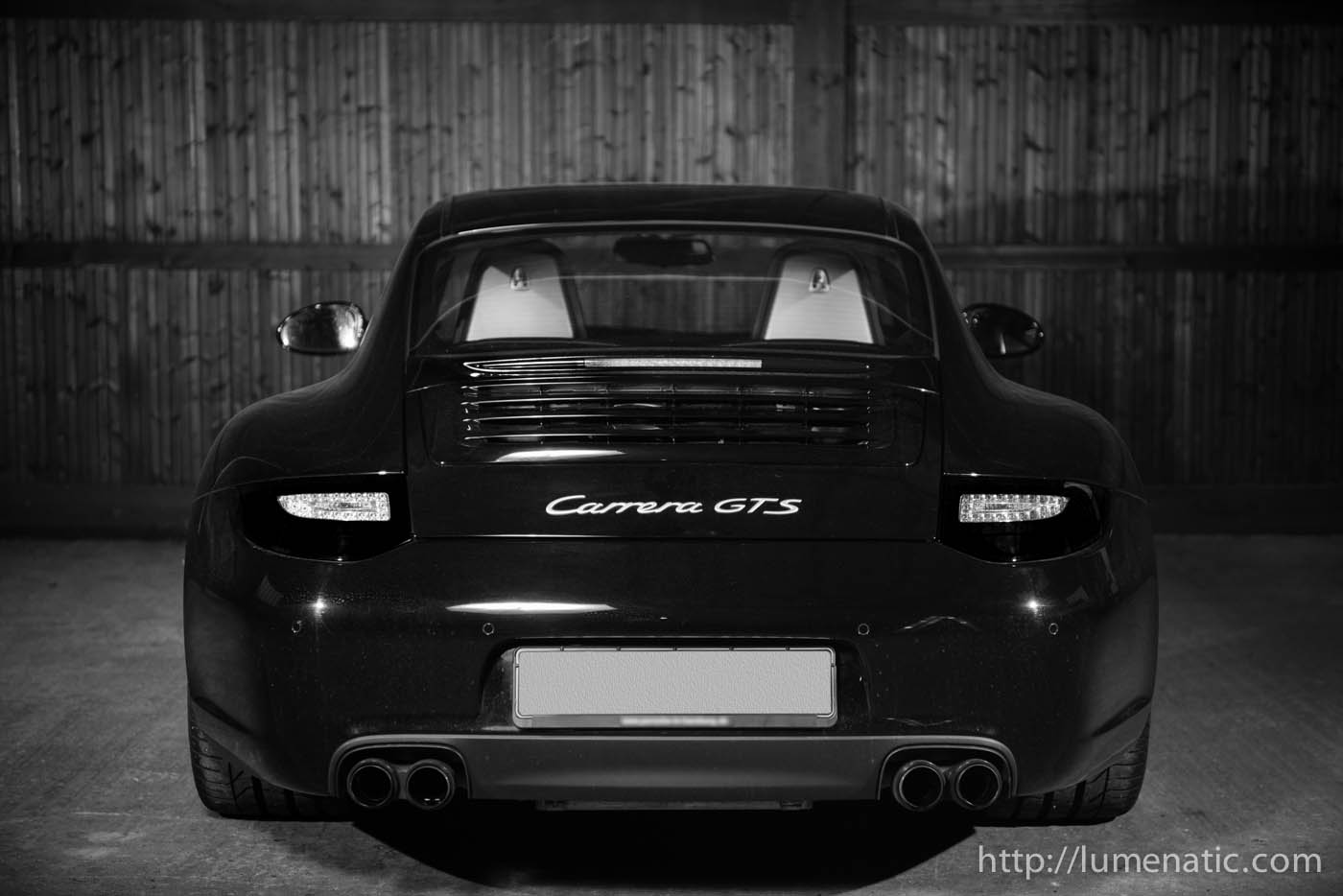 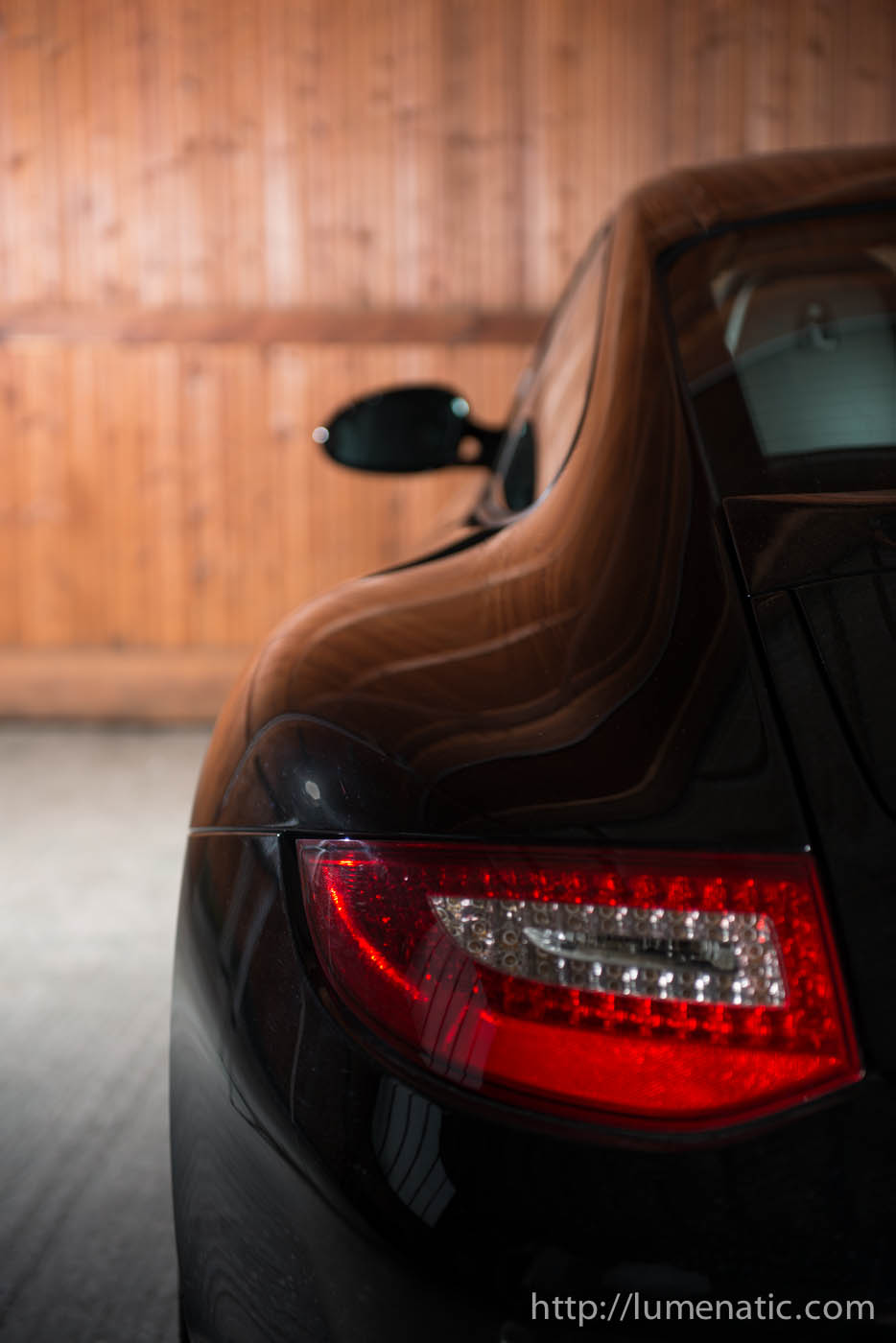 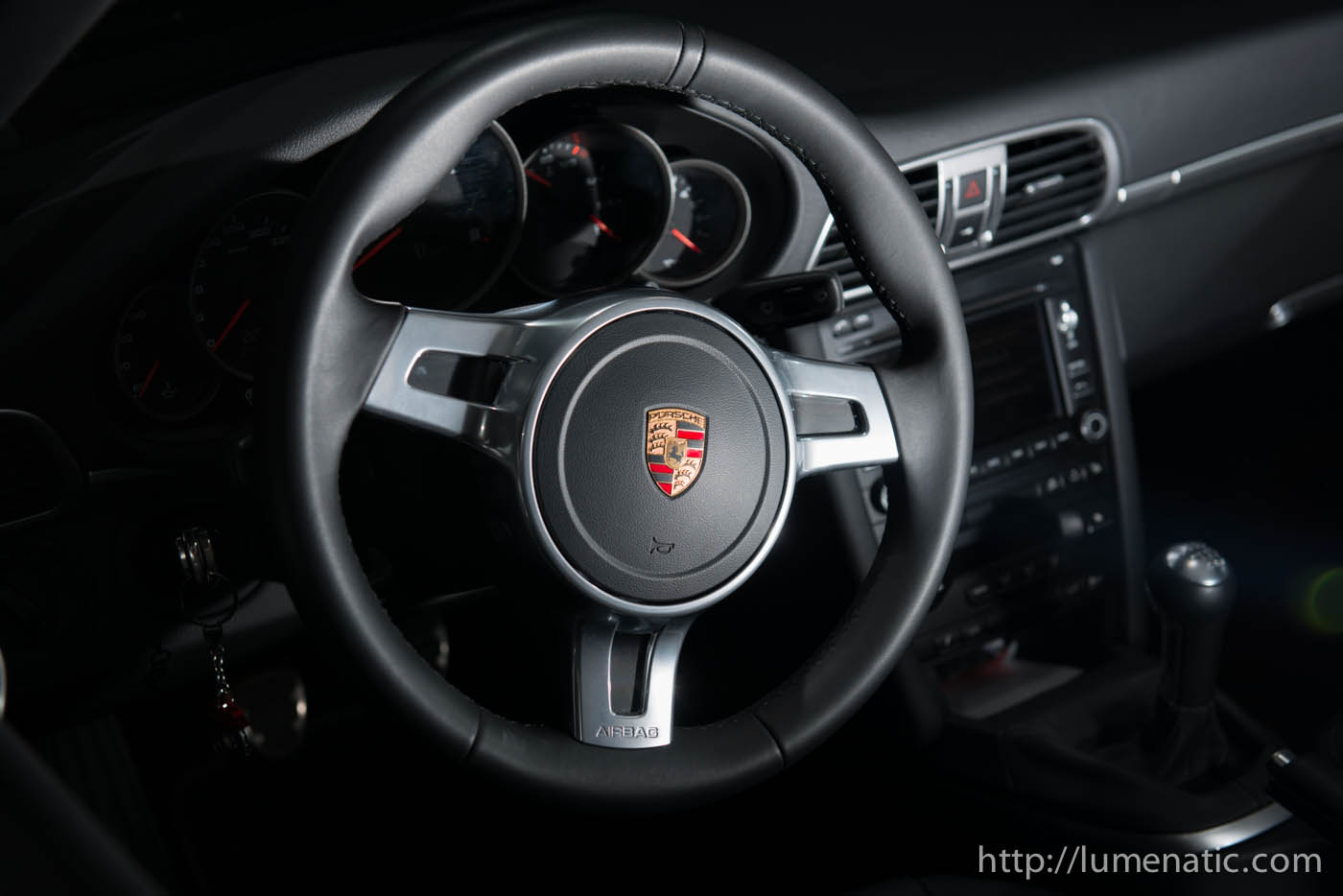 But first things first. The shooting took place in a large working hall with a barn-stlye wooden front. The first task was to clear the background. There were some cardboard boxes, a trailer and some tools which we moved out of the frame. Also we cleaned the floor a little since there were leaves and other debris lying around. Which proved to be a bad idea. In the hall also woodworking is done, sawing wooden beams and whatnot. Meaning: The floor is covered with sawdust. That’s bad for a freshly washed car. Very bad. The sawdust settled quickly on the high-gloss polished surface of the Porsche. Sometimes one has to learn obvious things the hard way. So here is a pro tip: Shoot in a clean environment to keep a clean car clean.

Lighting was hell. I did not shoot many angles, perhaps 8-10 different perspectives. But I made around 30 images per perspective since getting the desired lighting effect is very hard. And here comes another pro tip. I am a little reluctant to share it because it is so obvious, but having had this profane epiphany I must blurt it out: If you try to light a black car, all you get is the reflection of your light source and the environment. So either you have a veeery large light source (the kind car companies use when shooting cars – a giant softbox hovering over the car) or you light the environment and let the reflections do their play.

Here is a short making of-Timelapse video (taken with the D300s, timelapse compiled with the Lightroom Timelapse plugin).

Equipment – I used my D800 with the 24-70 f2.8 lens and three speedlights (SB-600 / 700 / 800). Further into the shoot I tried to add my two SB-R200s, but due to their position I could not get them to fire (I placed them in the car and in another situation underneath it with no direct line of sight to the camera), so the shoot was done with three Speedlights.

[Side note for faithful readers of my blog: The CLS caused only minor problems this time. I relate the triggering problems of the slave flashes to the positioning as mentioned above, but there were some other misfires. Read this post and search for “CLS issue” if you are a D800 user and also have trouble triggering your slave flashes].

One of the three Speedlights had an umbrella, the other ones only had diffuser domes most of the time. Why have one with an umbrella and two without ? Dunno, just did it that way. For certain images I attached a piece of cardboard to the flash to shield light. I did this to restrict light going towards the camera to avoid lens flare but also to lessen the amount of light hitting the floor. Taping cardboard to your flashes is tied to the concept of “negative fill flash”, read this enlightening post from photofocus.com for more info [not safe for work, naked ladies].

The shooting took around three hours and I went home with 300+ images (not counting the timelapse images from the D300s).

Post production: I mainly use Lightroom for retouching, therefore I am not very experienced in Photoshop. I use Photoshop from time to time, but never dug in very deep. This is why the dust on the car gave me a very hard time and it’s still visible on some images. To avoid dust, apply pro tip number one during the shoot, see above. Image modifications included cropping, straightening, tone curve adjustment, removal of some debris an major spots on the car surface. I did not succeed in achieving a high-gloss finish of the car, but that is ok since a.) the dust is only visible in high resolution and b.) the person who owns the Porsche is kind of a purist when it comes to retouching. His opinion is kind of like “I want to see the car on the photo as it looks to the naked eye” and my opinion is more like “Image manipulation begins with pressing the shutter”. But that is another topic with a large part being philosophy and personal taste.

To wrap it up – The shooting was fun, very educational for me and we agreed on repeating it in the future. So stay tuned for more to come !