The Tamron SP 150-600mm F/5-6.3 Di VC USD telezoom lens is quite new on the market and seems to sell like hot cakes. The lens is a telezoom ranging from 150 mm to 600 mm, which is absolutely amazing. I ordered mine on June 9th and the package was delivered on July 03rd. Currently Amazon lists the Nikon version to be out of stock. The most important specs in short:

Let me show you how that monster looks like: 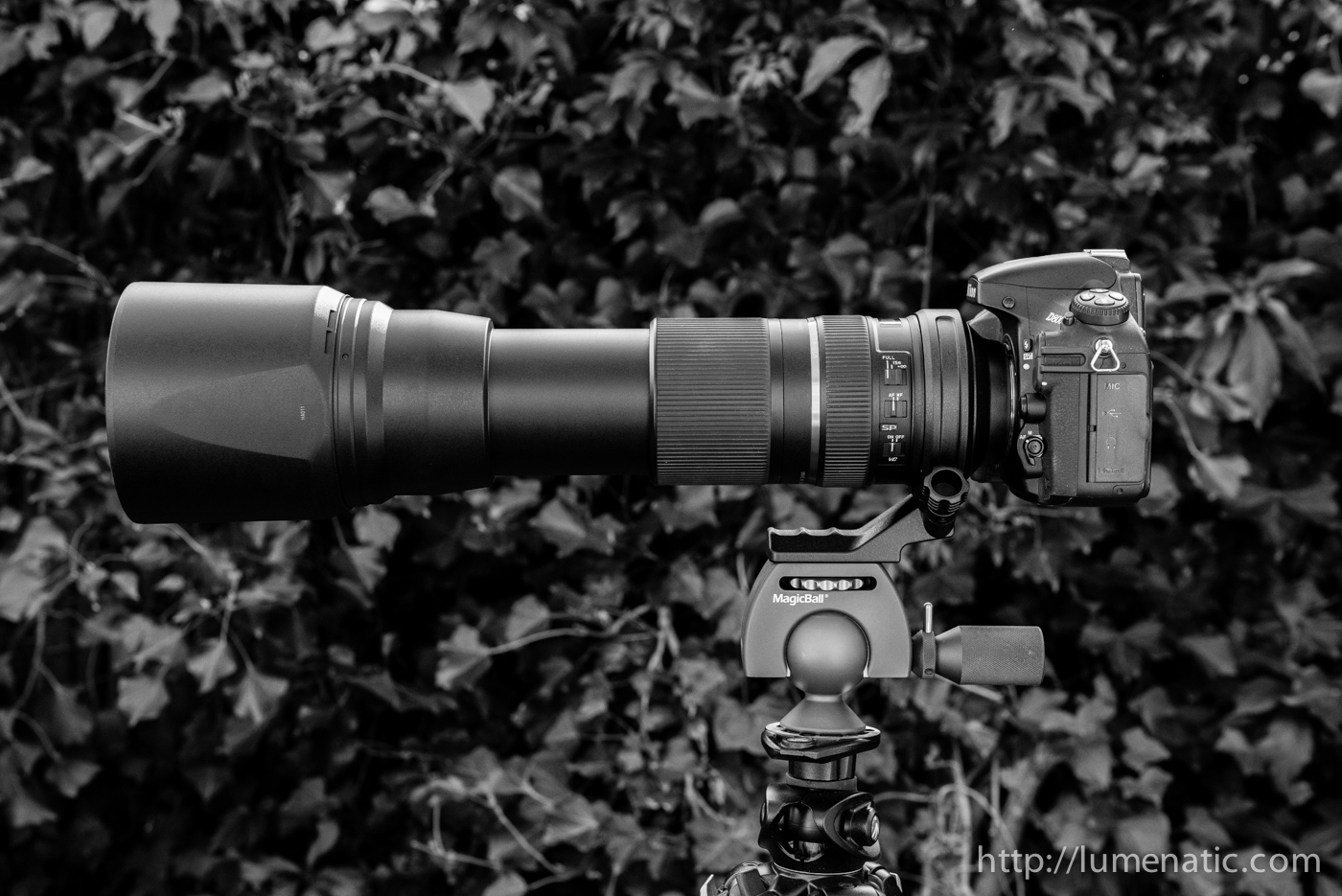 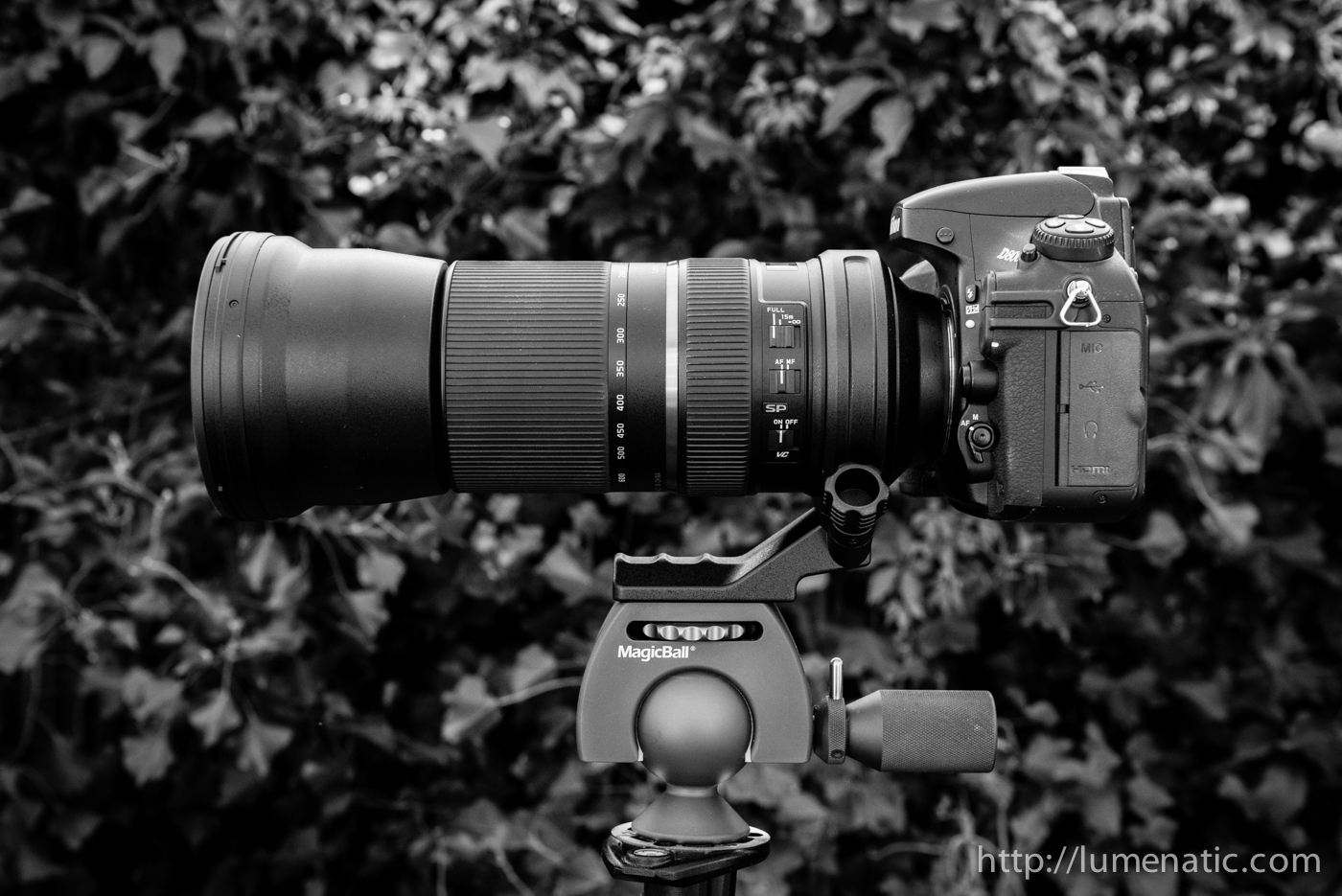 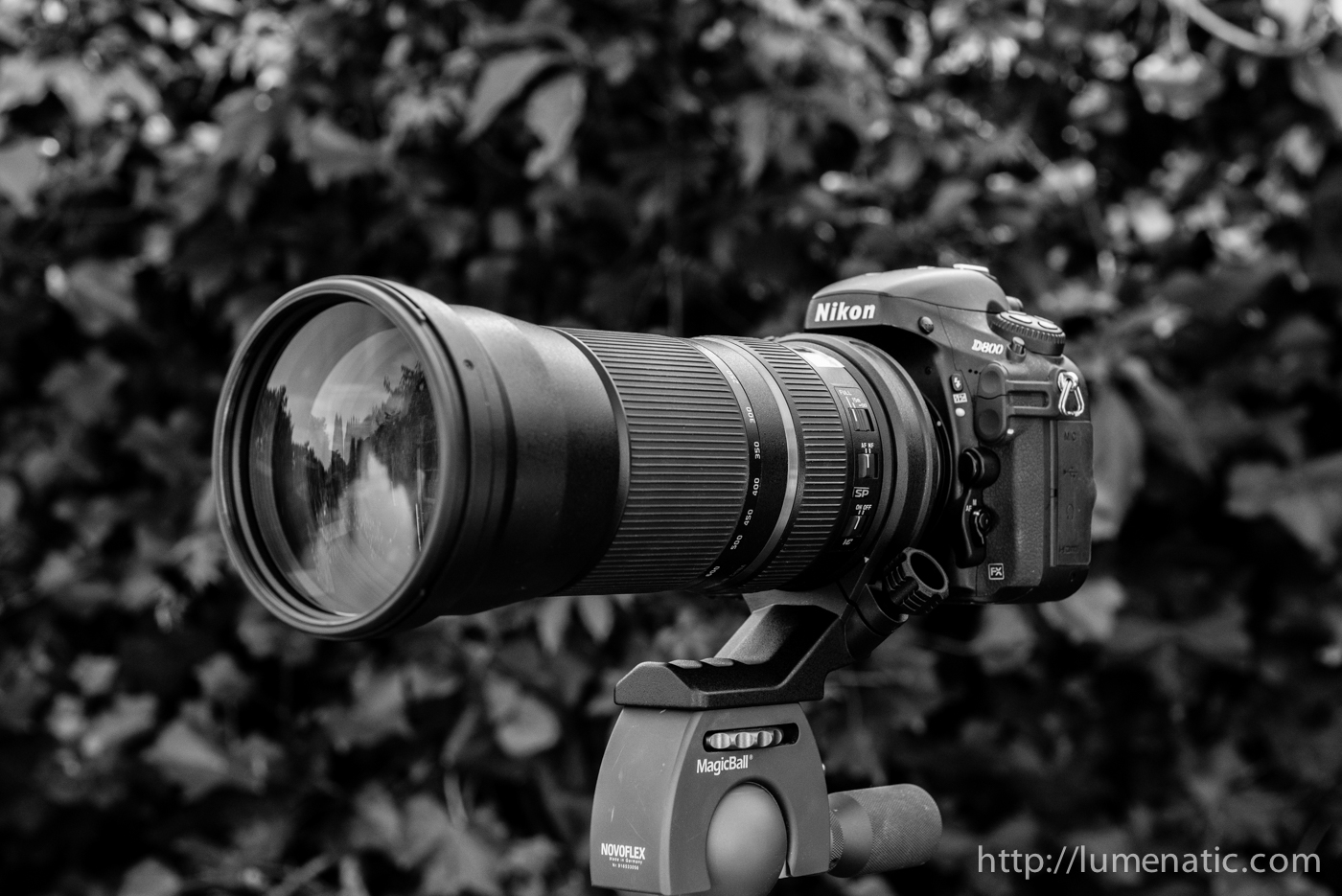 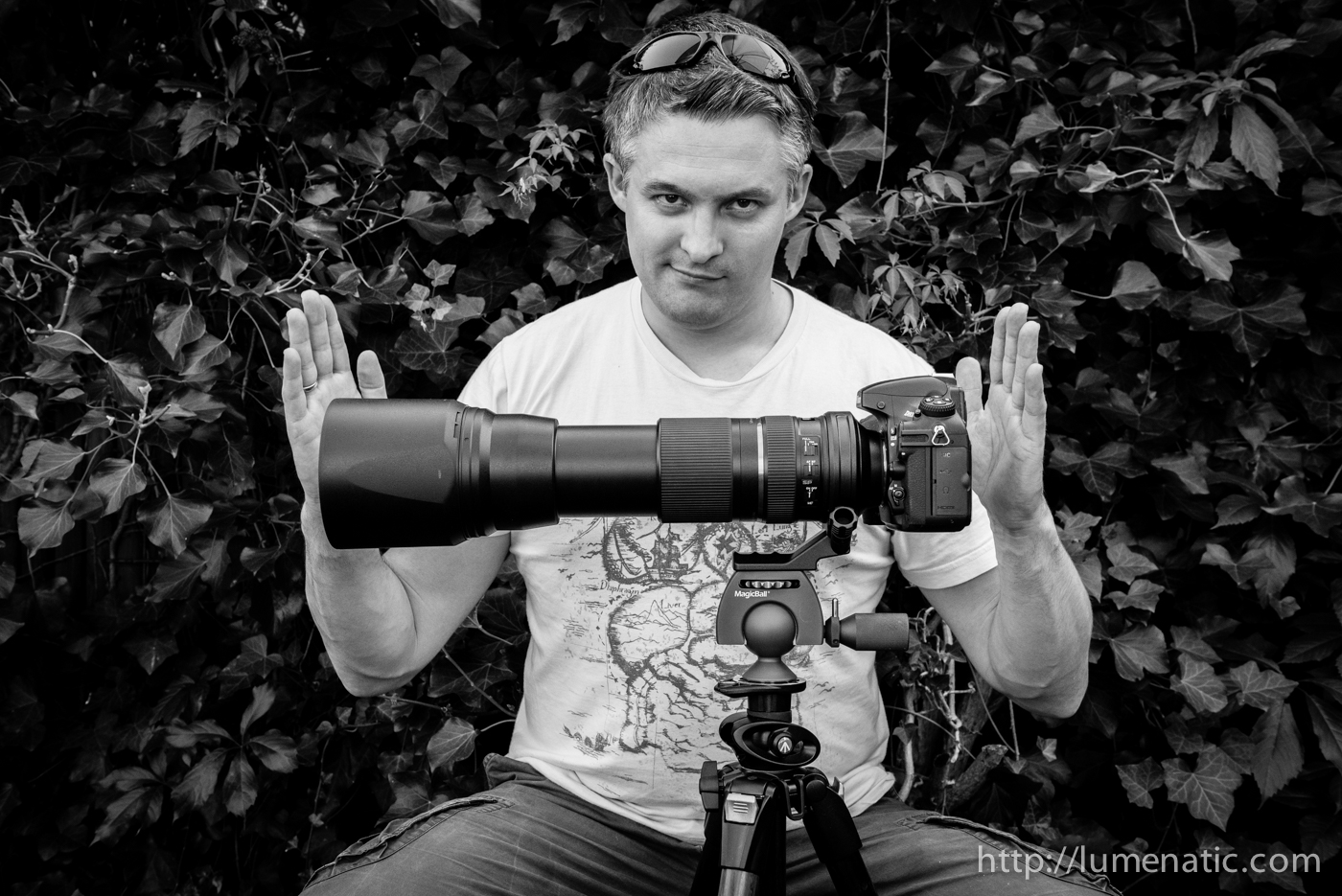 The lens barrel is made out of a sturdy plastic material which makes a high-quality impression. When I first read “plastic barrel” I was sceptic but trust me – the lens does not feel cheap. The mounting bracket on the other hand is made of metal, which is necessary to support the weight of the lens. Even with “only” using plastic the lens weighs 1.951 g, I don’t want to think about the weight if they had used metal for the lens barrel instead. The switches also seem to be robust, the sliding action during zooming is accompanied by a quiet hissing as the materials slide against each other. With the lens hood attached and the barrel fully extended the lens nearly sports a whooping 44 cm, which is, well, look at the images.

To give you an impression of the zoom let me show you my favorite subject – the moon. There was a nice half moon and I shot a sequence of images at different focal lengths. Note I did not use a tripod but rested both elbows on the window ledge. The image stabilizer (VC – vibration control in Tamron-speak) was turned on. 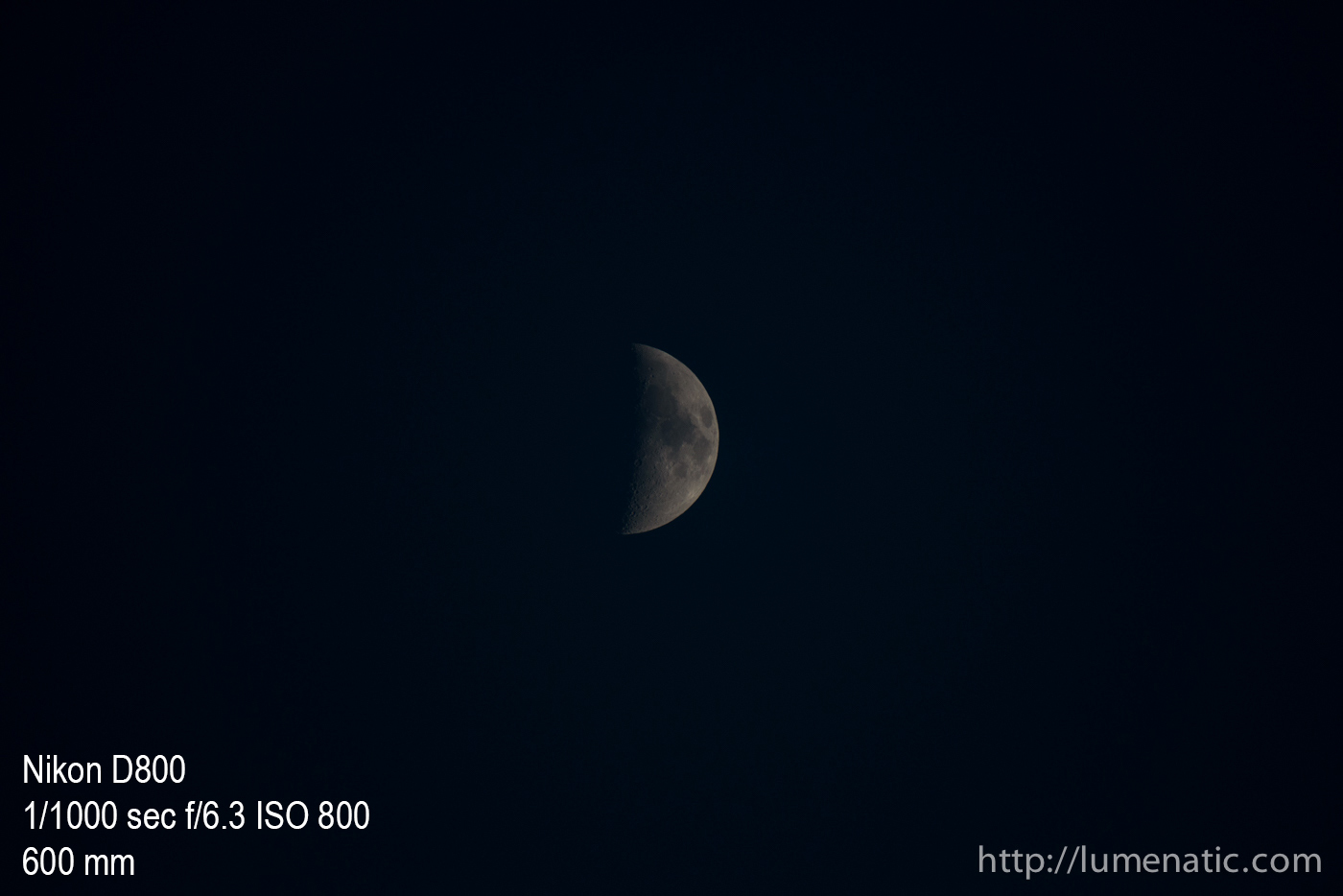 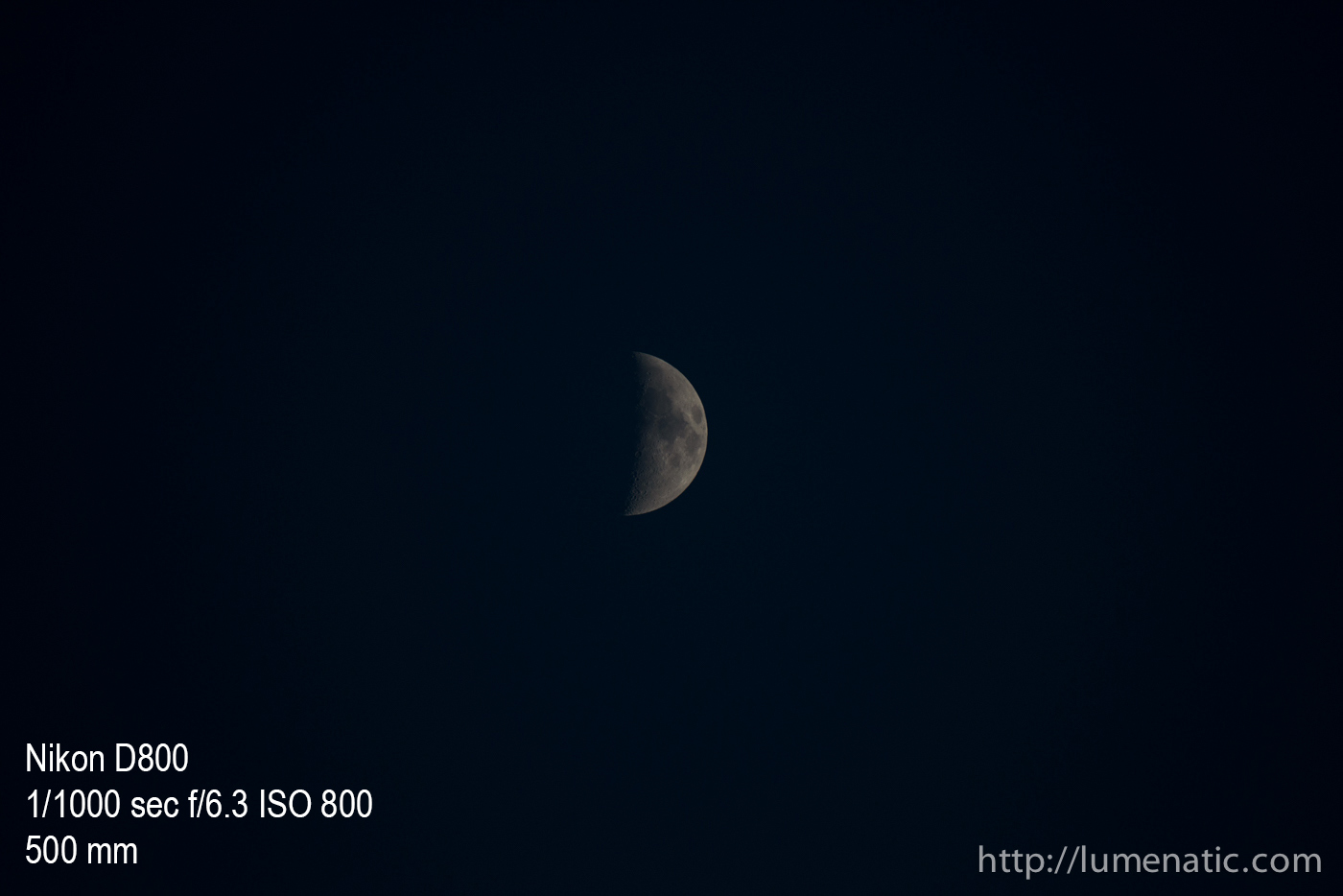 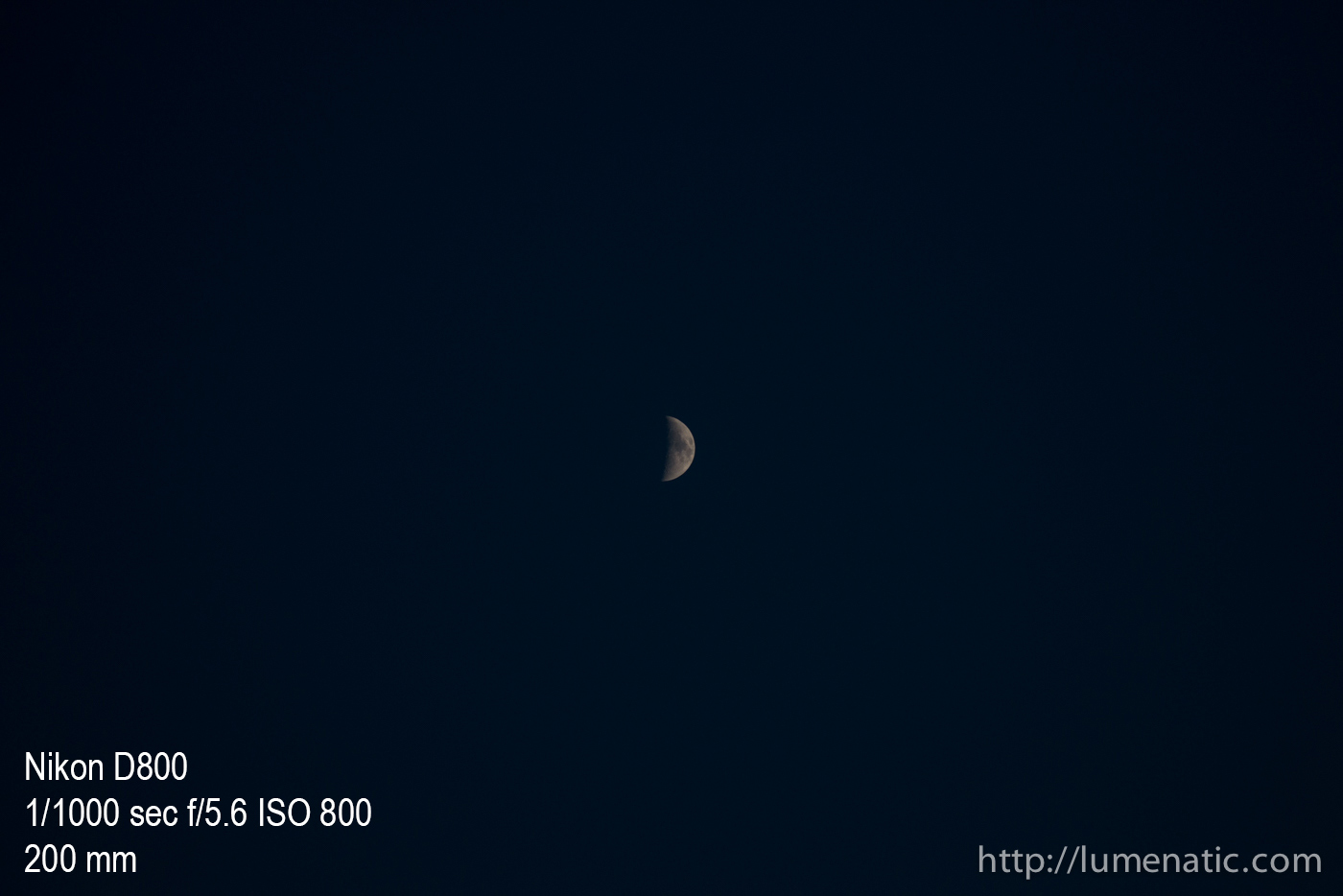 It is incredible how much detail one can see at 600 mm. Here is another test shot. The camera is pointed towards the clear sky, handheld, image stabilizer on. 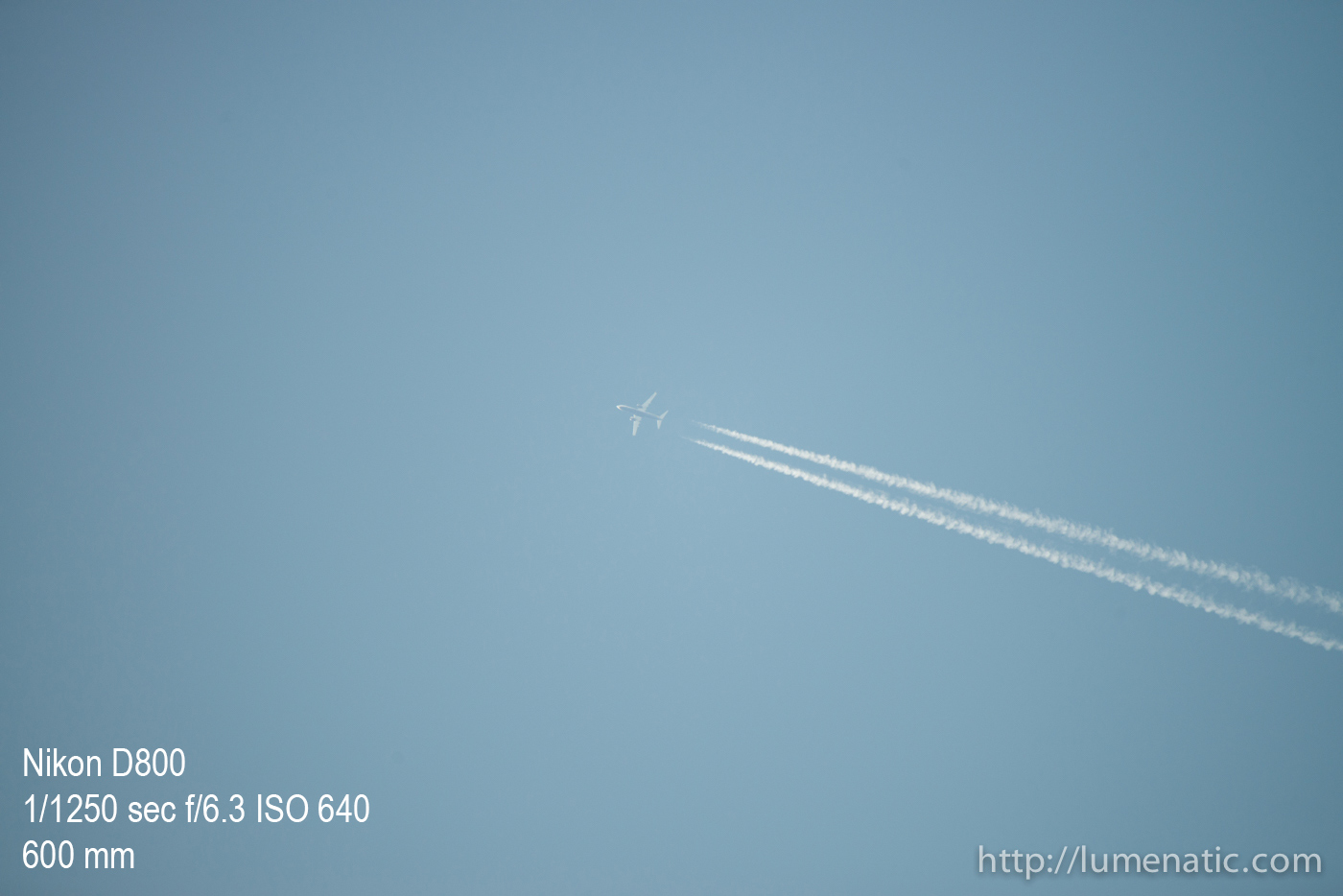 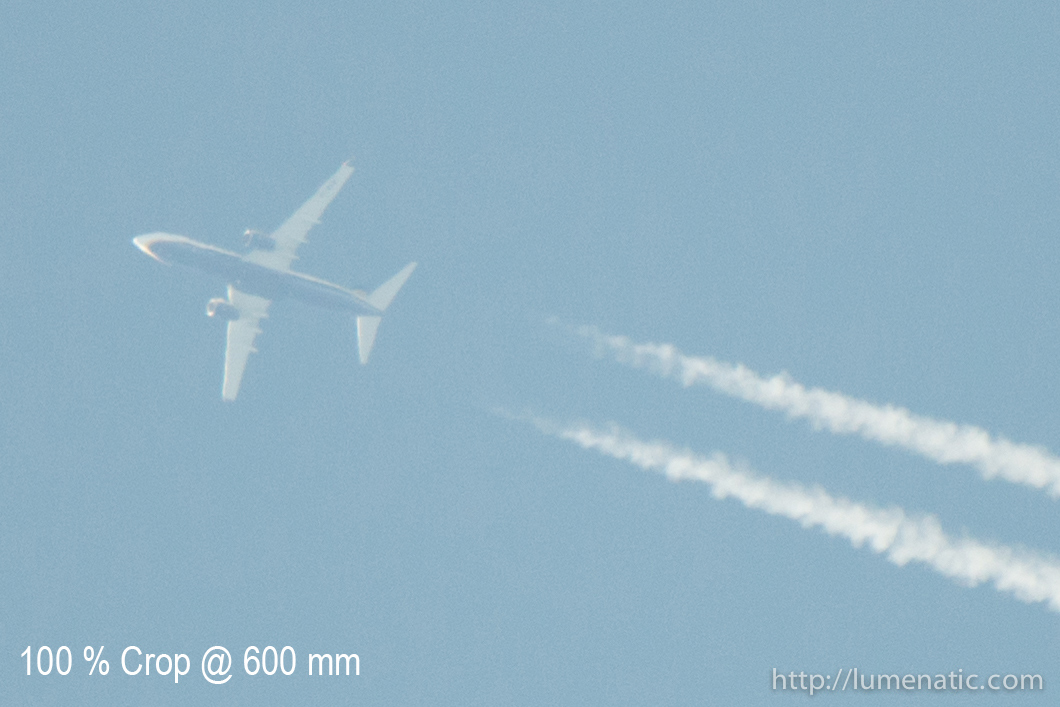 The plane looks hazy but keep in mind that it is approx. 11 km away from the camera. But those were only test shots. The next day I went to the zoo to give the Tamron a good test run. To make life easier I used a carbon monopod to support camera and lens during shooting. A monopod is a very good investment once you have such a heavy load to carry. Shooting with the Tamron was big fun. The ability to zoom in very closely gave me the opportunity to get some interesting animal portraits. The huge focal range leaves much freedom when you are composing your shot. The autofocus is very fast, which also lots of fun.

The lens is very sharp. I was amazed how much detail even at high focal lengths is captured. Some reviews I read about the lens prior to buying claimed that at the long end the sharpness would suffer. But take a look at the 100 % crops I made. The sharpness even at 600 mm is totally what I would call very good. If you are a pixel peeper you might cry out loud now, but keep in mind that most images one takes will be published at a lower resolution than they have been taken with. So any minute unsharpness which might be present will be “diluted” in the process of downscaling the RAW file to a JPG (That argument alone helped me to suppress my sharpness fetish and not listen to the pixel peeper demon inside me).

I’ll stop blabbering about the lens for now, look at the images and see for yourself (Note: All images were mage using a monopod for extra stability) 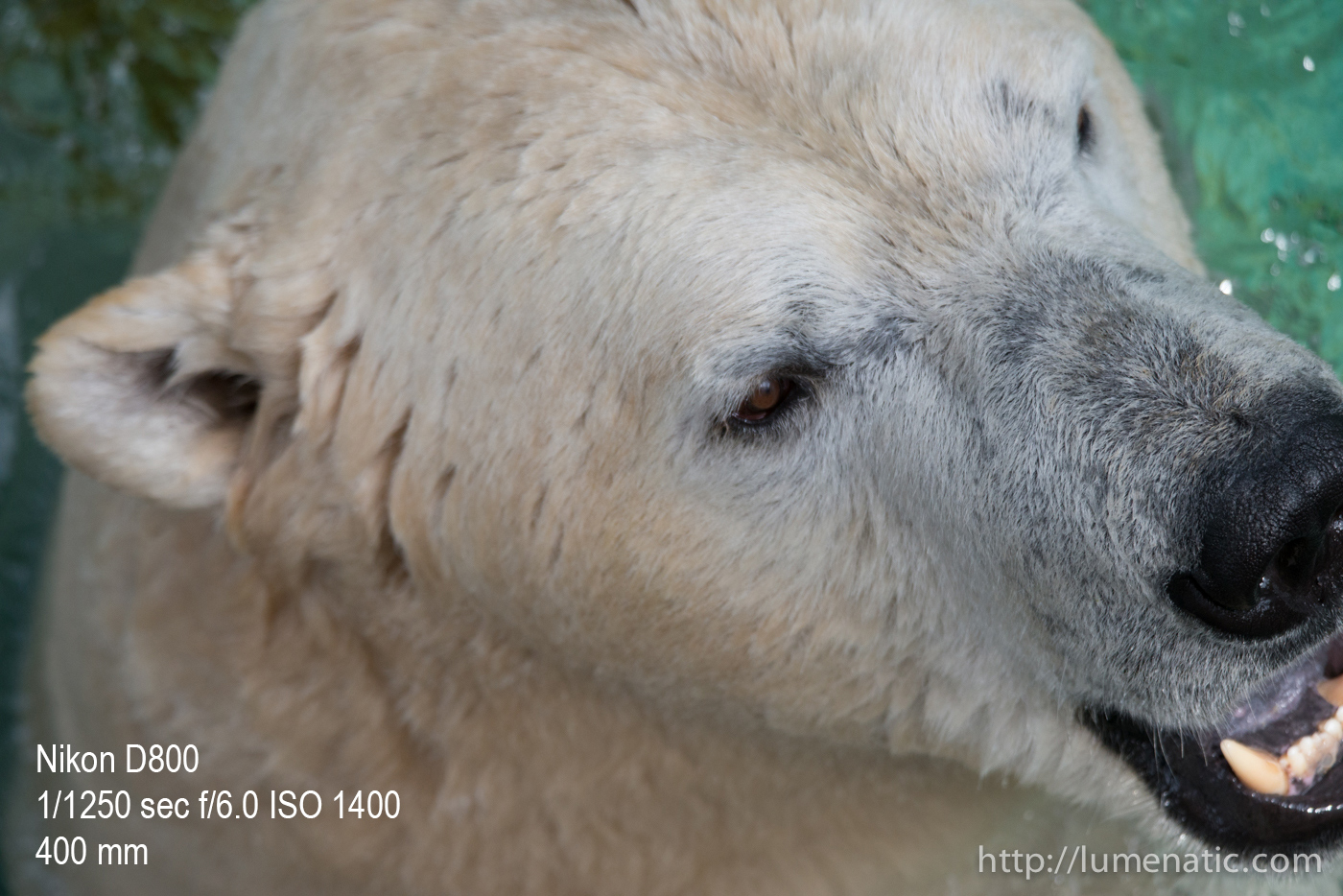 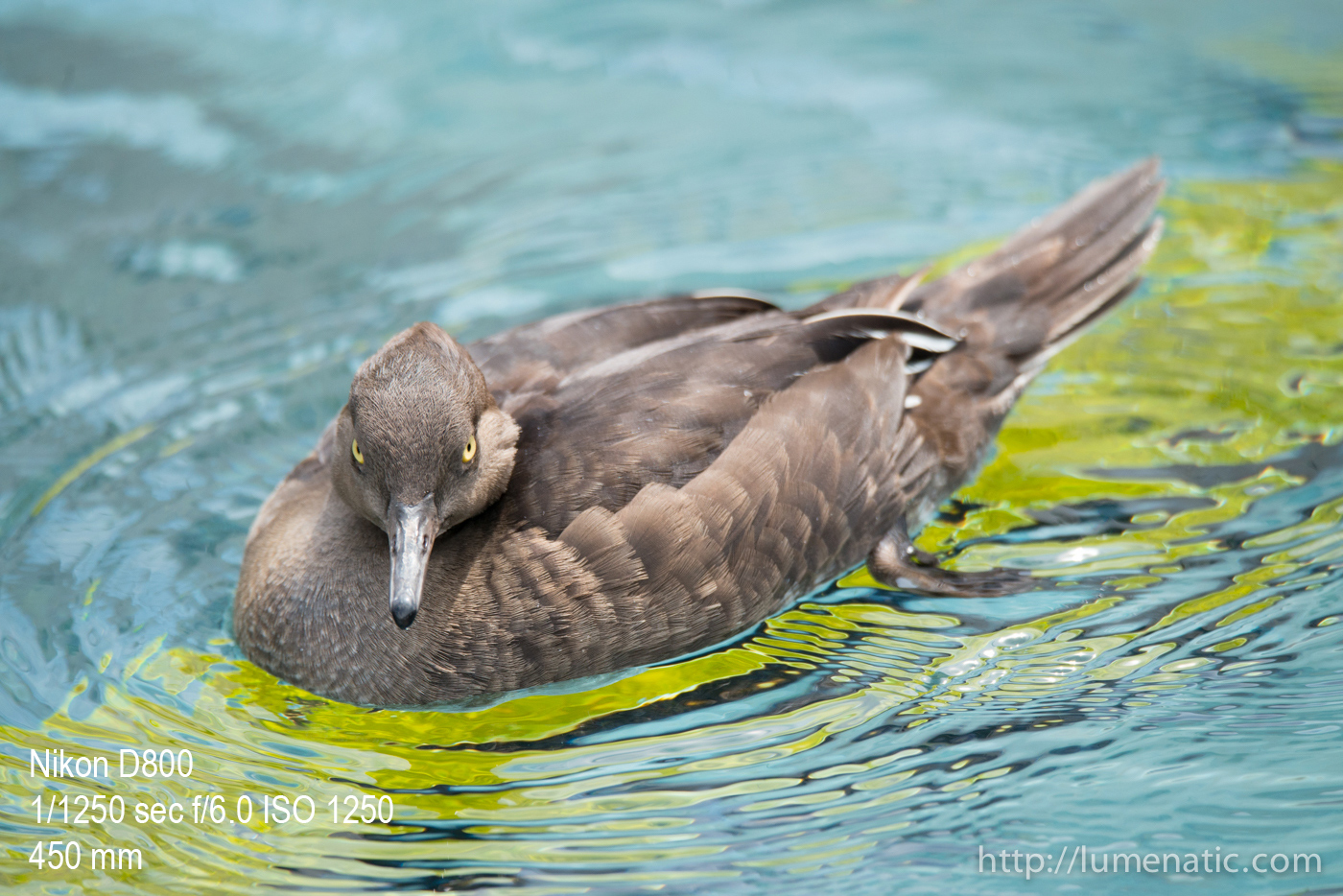 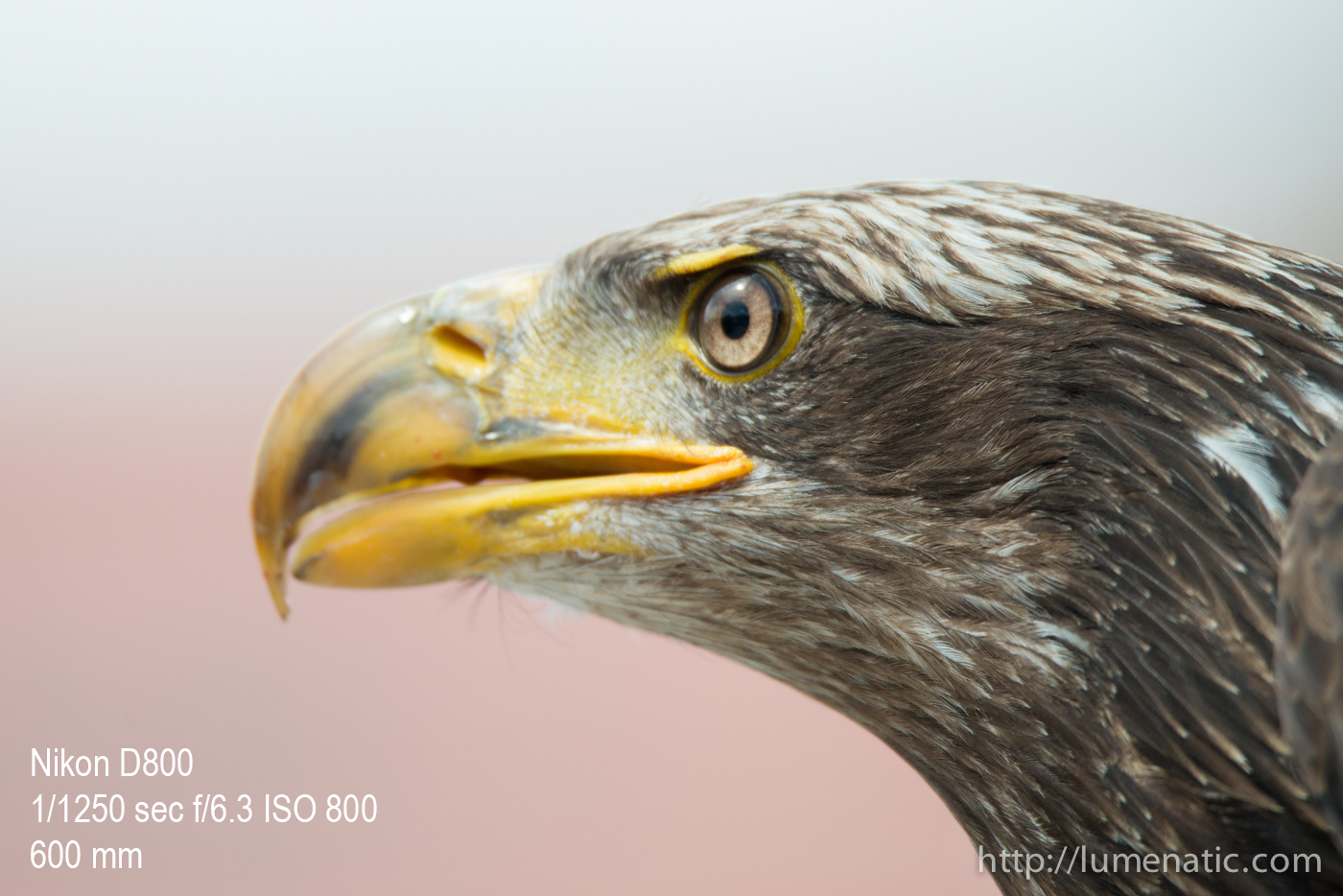 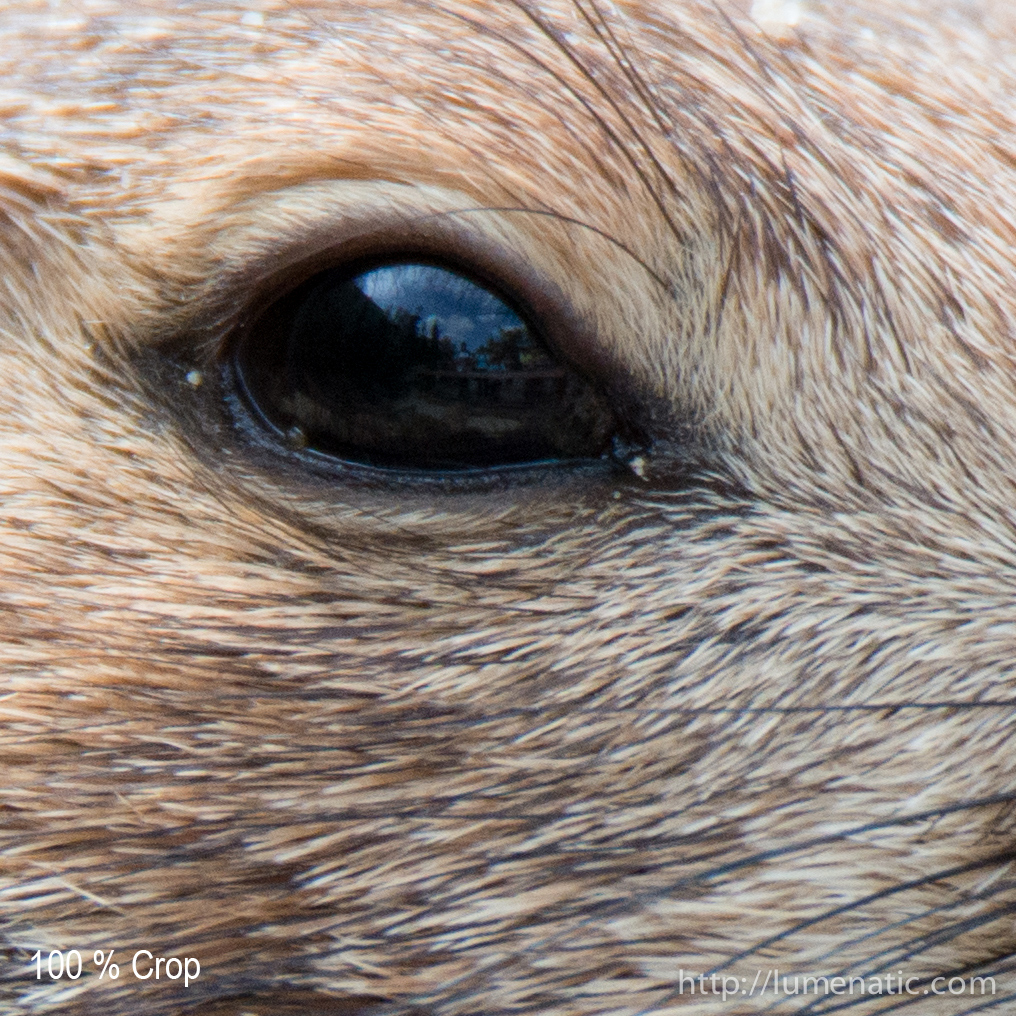 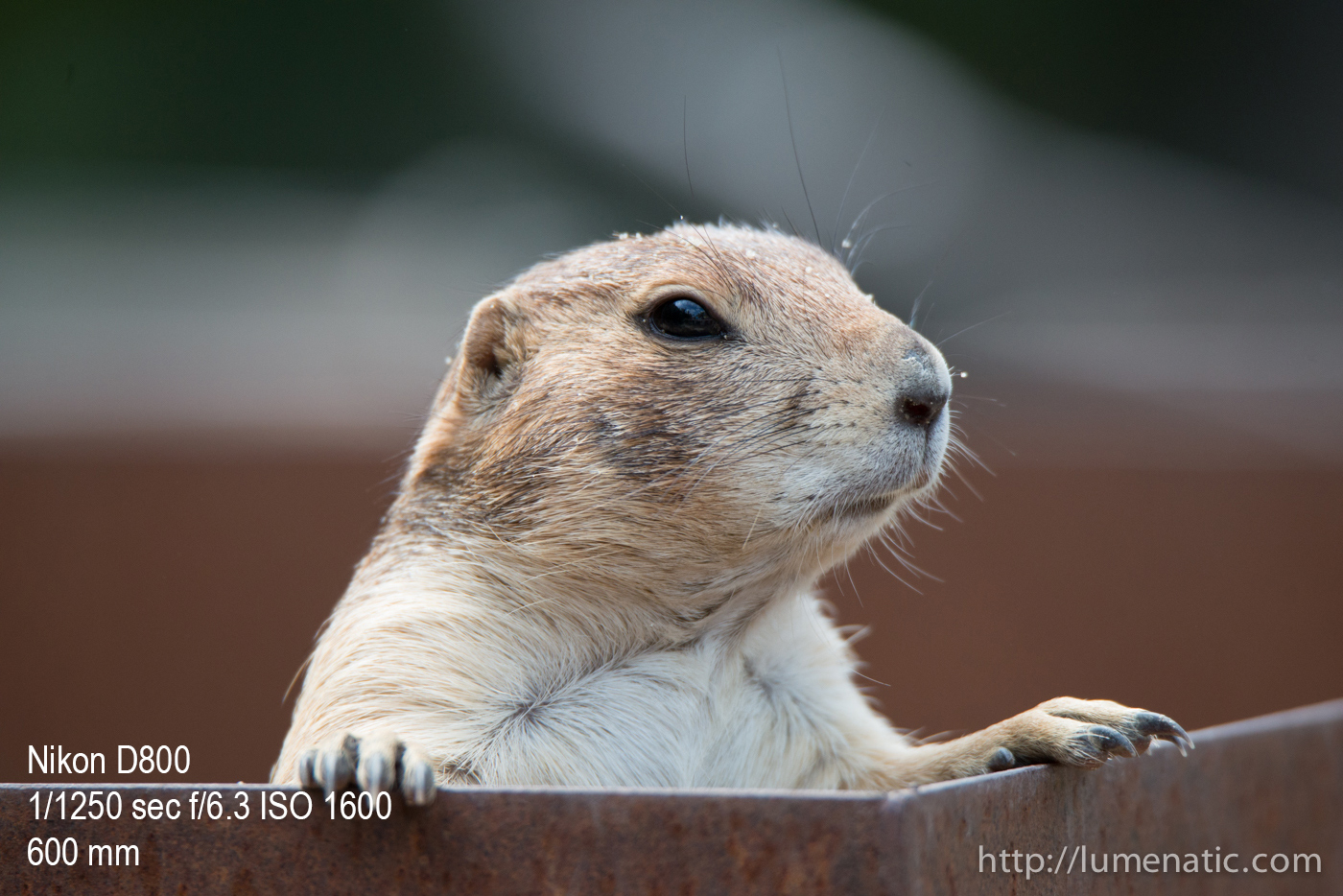 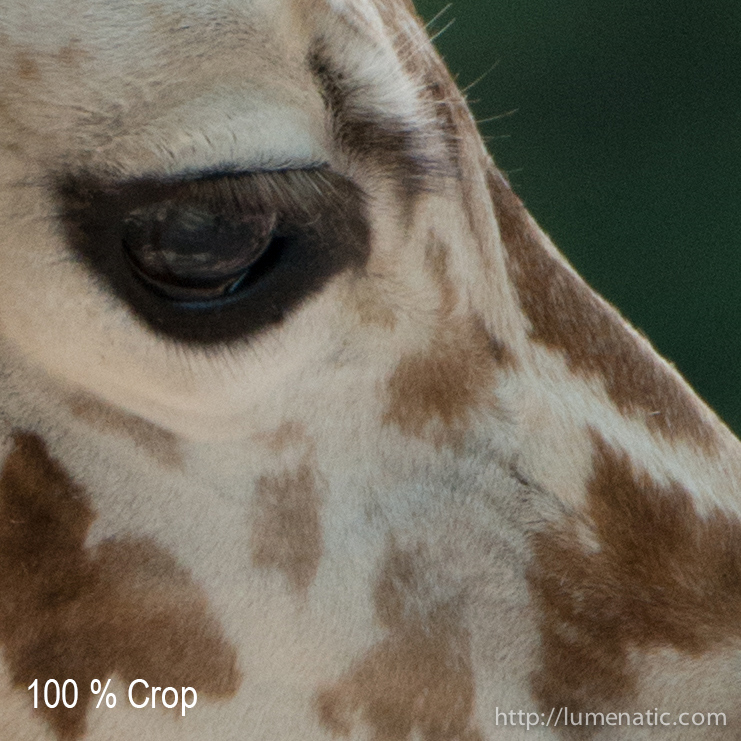 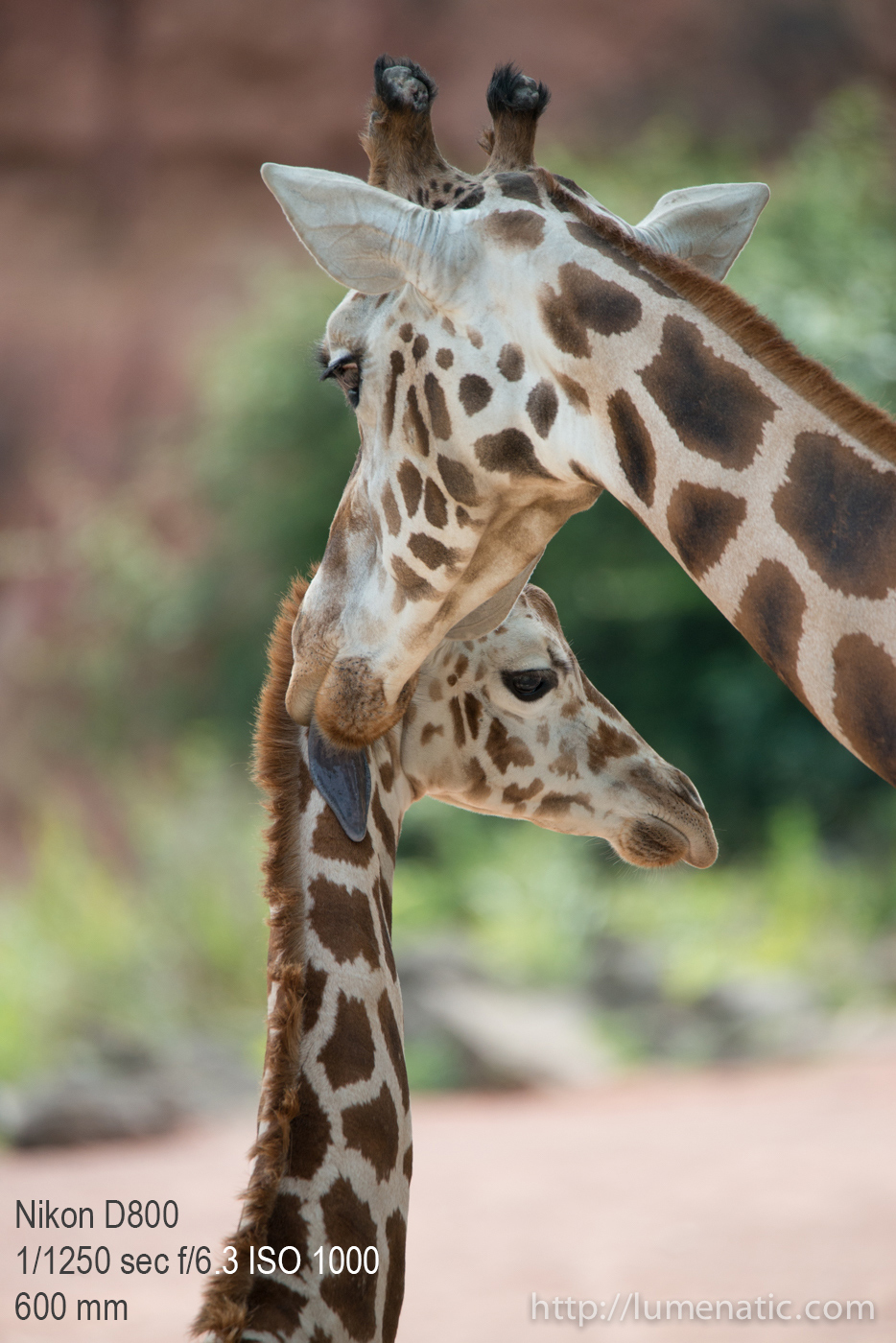 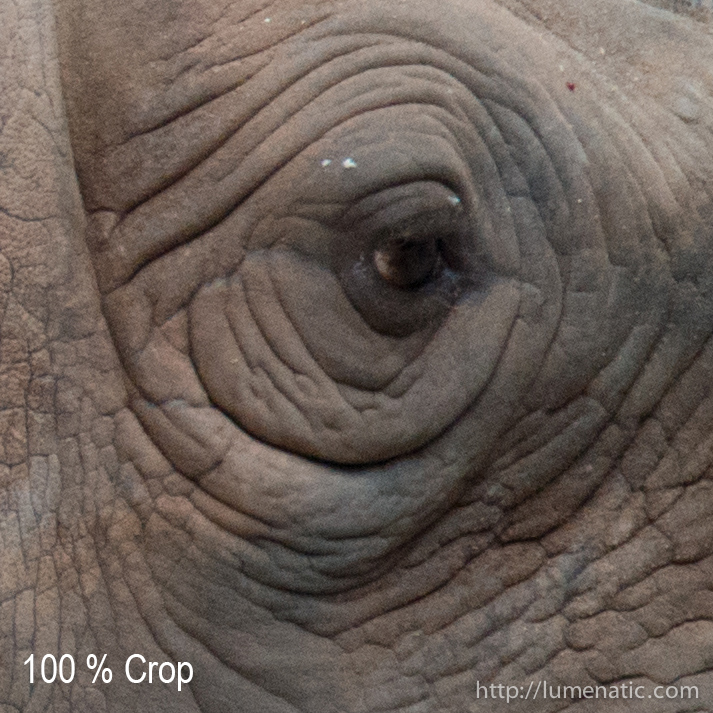 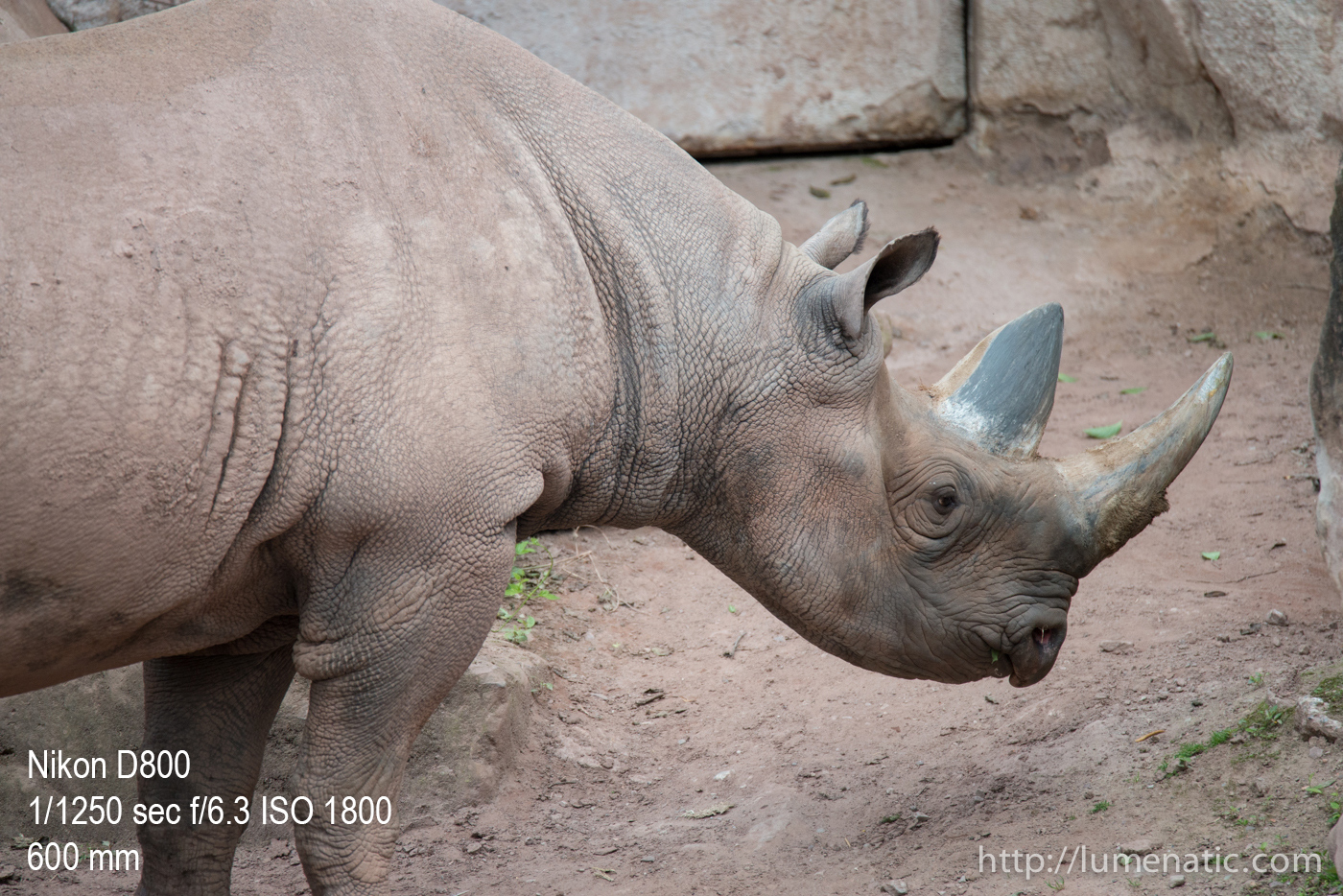 A tip about carrying lens, camera and monopod around. I used the method shown in the image on the right, which I found very convenient. I grabbed the lens at the mounting bracket, which has grooves for your fingers. The monopod points upwards. This way you have a firm grip on the camera and the monopod is out of the way. The only disadvantage is that you need space to flip the whole setup around. If that is not given you should rest the camera on your shoulder, so that the monopod is pointing downwards at any given time.

Bottom line: The Tamron 150-600 mm is a formidable telezoom. It is well built, very sharp and has a fast and very silent focussing system. Shooting with that lens is big fun. The price/performance ratio is unbeatable, other lenses in that focal range are much more expensive. I think the Tamron will find its way into the lens collection of many nature and animal photographers.