We have awesome neighbors. They do lots of cool stuff with their kids like digging up fossils in a quarry, visiting historical and scientific museums and conducting science experiments at home like growing crystals. Their newest project are frogs. They caught some tadpoles from a pond and watched them hatch and transform into frogs in a small aquarium at home. When I learned about that project the 105mm macro lens magically flew onto my D800 and the aquarium traveled from their home to mine for an intense shoot-out.

I placed the aquarium on a table, surrounding it with black canvas from my studio. As a light source I used an SB-700 with a Lumiquest Softbox III attached to spread the light over a wider area. This one is my favorite shot from the session: 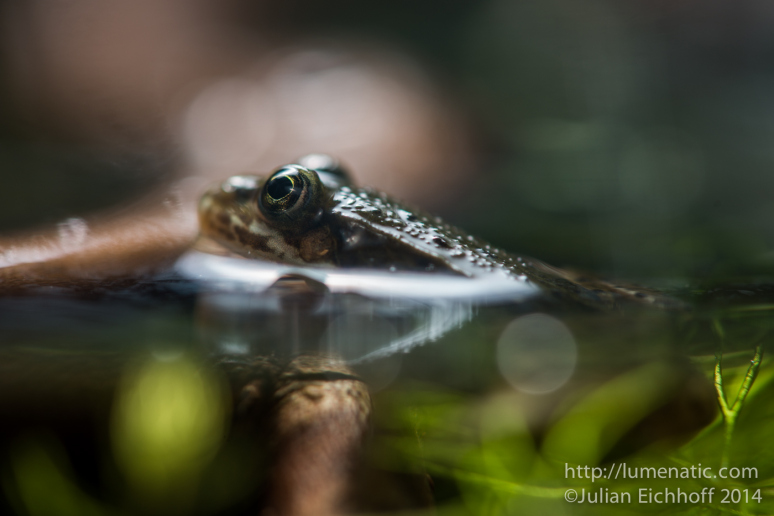 Getting decent pictures was very difficult. First of all, the glass of the aquarium was very dirty due to water splashes the frogs created over time. Secondly, aquarium glass is not optical glass, so some quality loss due to an additional layer of glass was inevitable. Third: The frogs clanged to the glass, staring outside the aquarium as if they had the urge to flee. So the walls of the aquarium would always be in the picture like in this one: 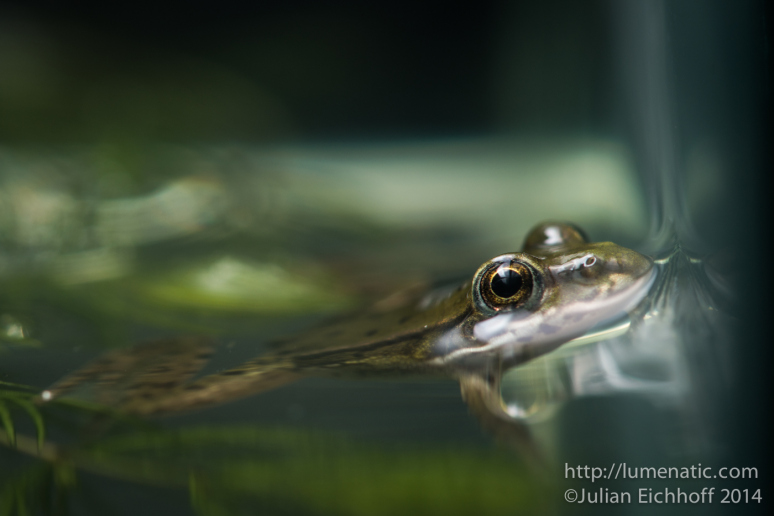 The best results were obtained when the light came from above as shown in the first two images (I hope the little fellas were not too scared by the photonic bombardment). But also light flashed in from the side could produce somewhat presentable results:

In post the contrast and clarity sliders were my best friends. It is amazing how much detail and, er, clarity these parameters give to your image. The milky haze of the aquarium glass could be reduced (see also this post from a shooting in the zoo for a similar situation). Stains on the aquarium walls or stuff floating in the water could easily be cloned away.

With more time and patience and better preparation (thoroughly cleaning the aquarium for example) even more impressive pictures could have been taken. If I had waited long enough the frogs would have climbed the wooden branches floating in the water at some point giving a beautiful subject. But I had only one evening and, being restless and impatient AND not wanting to toast the frogs with my flash, I did not go further.

Finally, for your information, there were two frogs in the aquarium. The one you see above was developed completely, the second one was at an intermediate stage between a tadpole and a frog. He seemed to make fun of my photographic attempts by clinging to a lower corner of the aquarium the-whole-damn-time throughout the shooting. This way I had no chance to shoot him against a nice background. Again, the image is for your information to see how a half-finished frog looks like 🙂