Switching from iOS to Android

People say “Once you go Mac, you never go back”. While this is still true for my stationary computer (love my iMac) I broke with that saying regarding the smartphone. Here is my story.

Prequel
After using the iPhone4 for about four years the device started to show first signs of wear. The home button did not work properly, applications and interaction became slow and laggy. Slowly but surely using the iPhone evolved (or better de-volved) into a nerve-straining routine. Time for a change. My affection for Apple products might be a big one but it is not blind love. I am well aware about other devices on the market and their price/performance ratio. At the time the iPhone6 was announced my plans for getting a new phone were entering the realization phase. I had noticed the Samsung Galaxy series as I know some people who own one but my decision was not made yet. Apple was so kind to make the decision for me. Once I learned about the prices of the iPhone6 the switch to an Android phone was sealed.

I have to note that I do not have a mobile contract with my provider but a postpaid plan (=no contract fee, pay only for what you use, can be cancelled with one month notice). While it gives me the freedom to pay only for what I use without a basic fee there comes no phone with that plan. I have to buy the phone by myself and there is no option for a new phone after X months.

That situation made the iPhone6 totally uninteresting for me. The 4,7” version with 64 GB is 799 € and I was not willing to pay that much when the competition offers fantastic phones for much less money. I decided to go for a Samsung Galaxy S5. It cost me 490 € (still a lot of money for a phone) plus 50 € for a fast micro SD card. That left me with 540 € spent – 259 € less than Apple would have charged for a 64 GB phone.

The migration
Since I am still using my iMac and an iPad I needed a solution to sync all these devices. Here is how I did it.

Calendar
That was easy. iCloud calendars work only with iOS devices (if one does not use a special App on Android devices), so I simply copied all events from the iCloud calendar into a Google calendar. All Mac, iPad and Android can automatically sync with Google.
Mail
Also simple. I registered all my mail accounts on the Galaxy S5 and tadaa, works.
Contacts
Here I still wanted to use Apple iCloud. I installed SmoothSync for iCloud Contacts (costs something between 3 and 4 €), started the app, logged in with my iCloud account data and – finished. The app runs in the background and automatically syncs any changes both ways.
Images and Music
Image and music files must be copied manually onto the phone’s memory. That can either be achieved by inserting the micro SD card into a reader and connecting it to your computer (what I initially did), but you might not want to disassemble your phone every time you add music. Here two different methods are possible, depending on whether you are using a Mac or a PC.
PC: For once (!) the PC users have less hassle. They connect the phone with a USB cable to the computer and the phone is mounted like a USB stick. Drag and drop images and music to the specified folders on the phone and you’re done.
Mac: For some reason plug’n’play does not work on a Mac. We all know the golden cage-mentality of the Apple world, so it is not surprising that one has to take a detour to access the files on an Android smartphone. The solution is called “Android File Transfer” (free software). This small piece of software gives you access to the file system of the phone in a similar way the Mac Finder does to a USB device. Drag & drop files from the Finder to the phone, delete and move files on the phone as you normally do on the Mac. (Please note that if Samsung Kies is installed (something like poor man’s iTunes) the file transfer utility can not access the phone ! Took some googling until I learned about that. Download Samsung Kies, mount the image and use the uninstall utility. Do NOT simply delete the program, uninstall it properly). 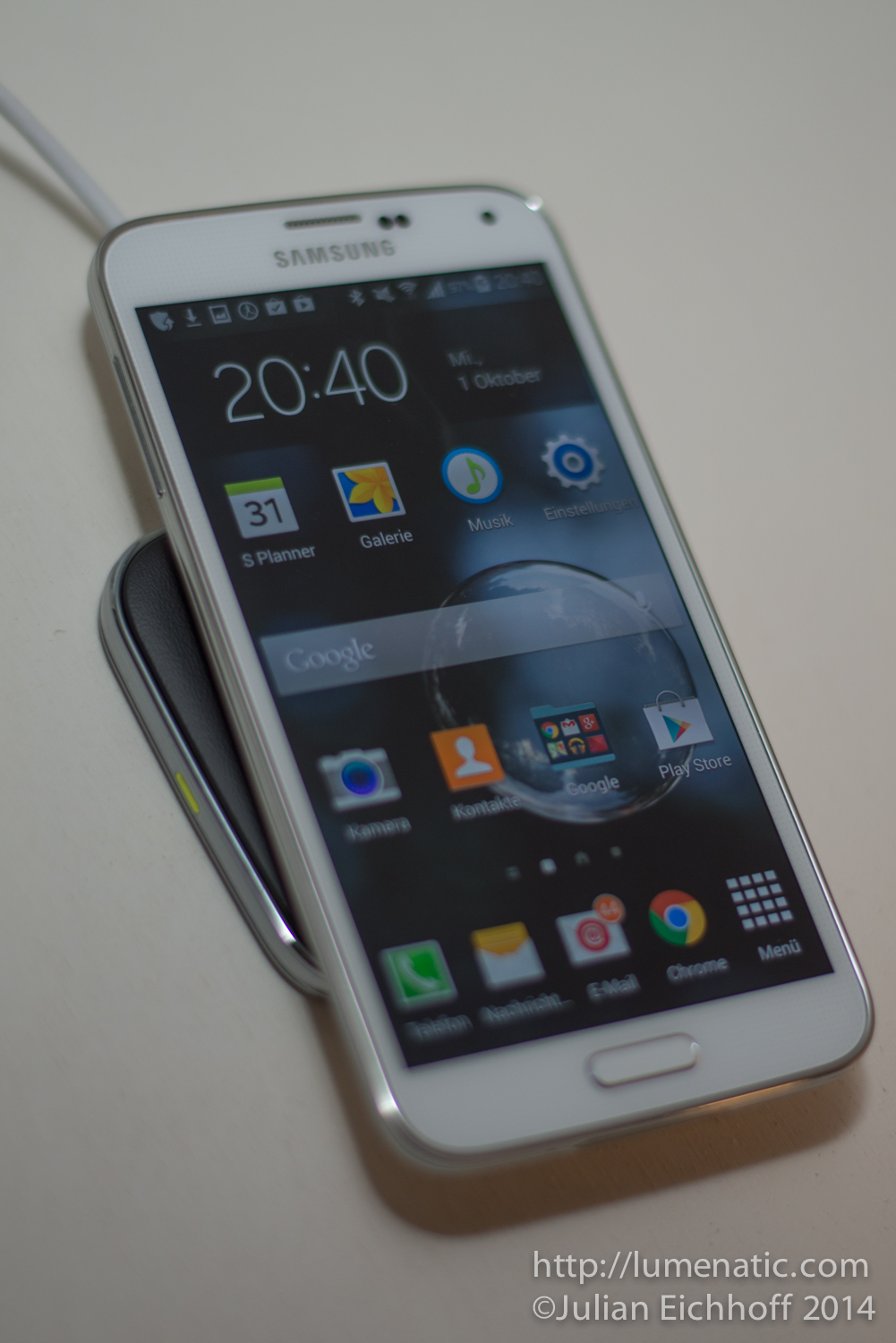 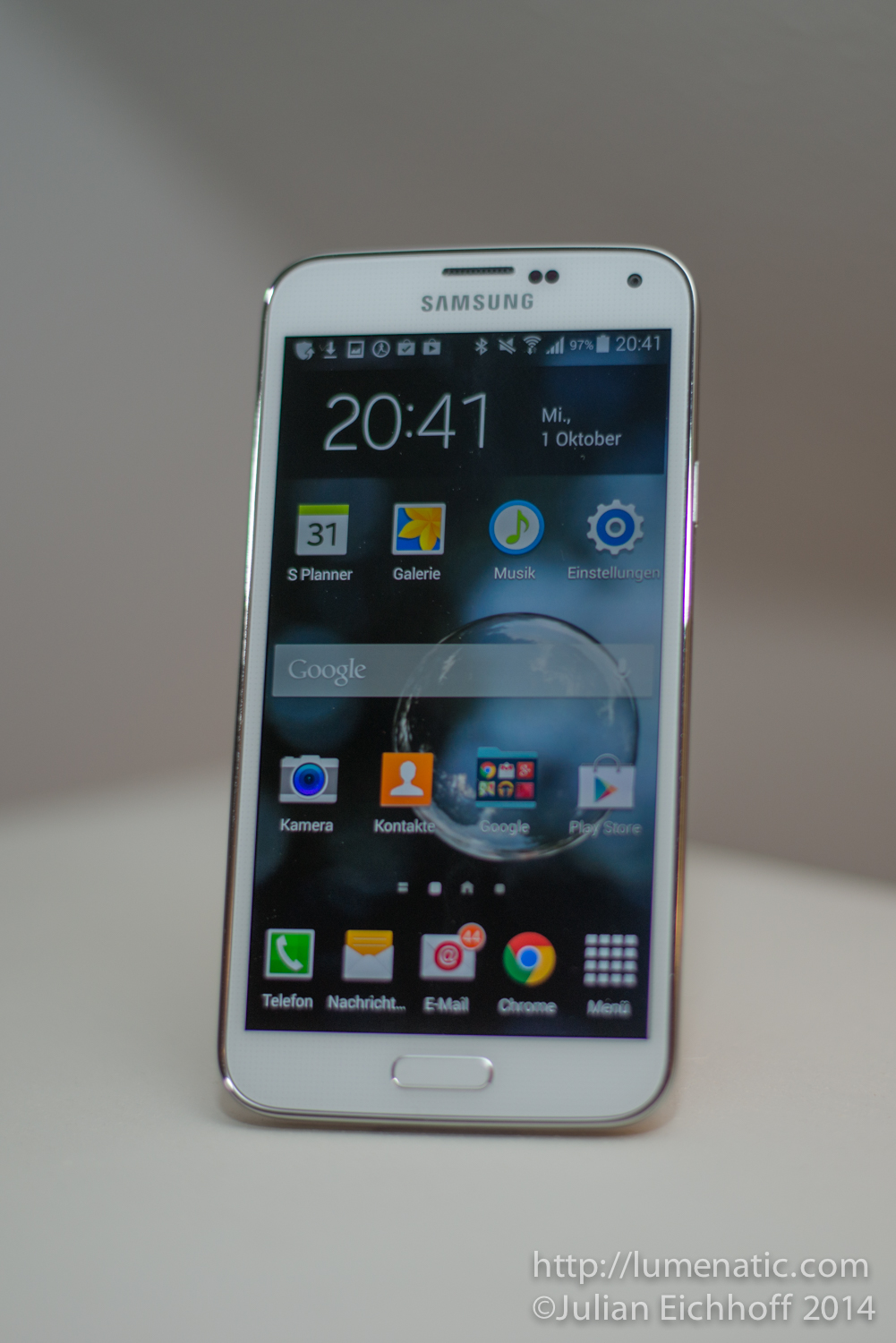 Using an Android phone aka “what does this button do ?”
Coming from iOS I needed some orientation on the new phone. There are way more settings which can be individually configured, also the phone comes with many apps already pre-installed. Much of the pre-installed stuff can be deinstalled immediately (e.g. I don’t use EverNote, Groupon or Dropbox => Delete). Once you get the concept of the UI navigation is easy. I did not need any tutorials but basically did learning-by-doing.

I learned about the complexity (complex in comparison to an iPhone, Android is not rocket science) when I was flabbergasted that the battery did not even last a day. That felt very odd and it took me a while to figure out what was behind it. When adding a Google account all Google services are set to sync by default. The phone tries to sync Google Books / Kiosk / Movies / Music / Drive / Contacts / Chrome….. The setting is hidden in the “Accounts”-section, one has to dig a little. Once deactivating all unnecessary syncs battery life expanded.

This is just an example for the difference between Android and iOS. While iOS is slim with a shallow menu depth Android offers a broad variety of options. That is nice because one can customize the phone to the max, on the other hand one can lose the overview quite quickly.

Some stuff Apple does not offer
Apple has an incredible branding and reputation. Many people think that Apple is always spearheading new technologies. Well, that is not the absolute truth. Here are some nice features of the Samsung Galaxy S5 the iPhone does not have.

Inductive Charging. Smartphones need juice and the battery has to be recharged every two days if you are lucky. The Galaxy S5 can be outfitted with an alternative back cover with an induction coil (see images above). Together with a charging pad this is a very convenient way to charge your phone. Just place it on the pad and charging commences. The best part – what do you think this inductive charging kit costs ? 150 € ? Hey, it’s not Apple, calm down ! I only paid around 36 € for the complete kit (phone back with inductive coil, charging pad, cable). One word to describe this: Sweet ! 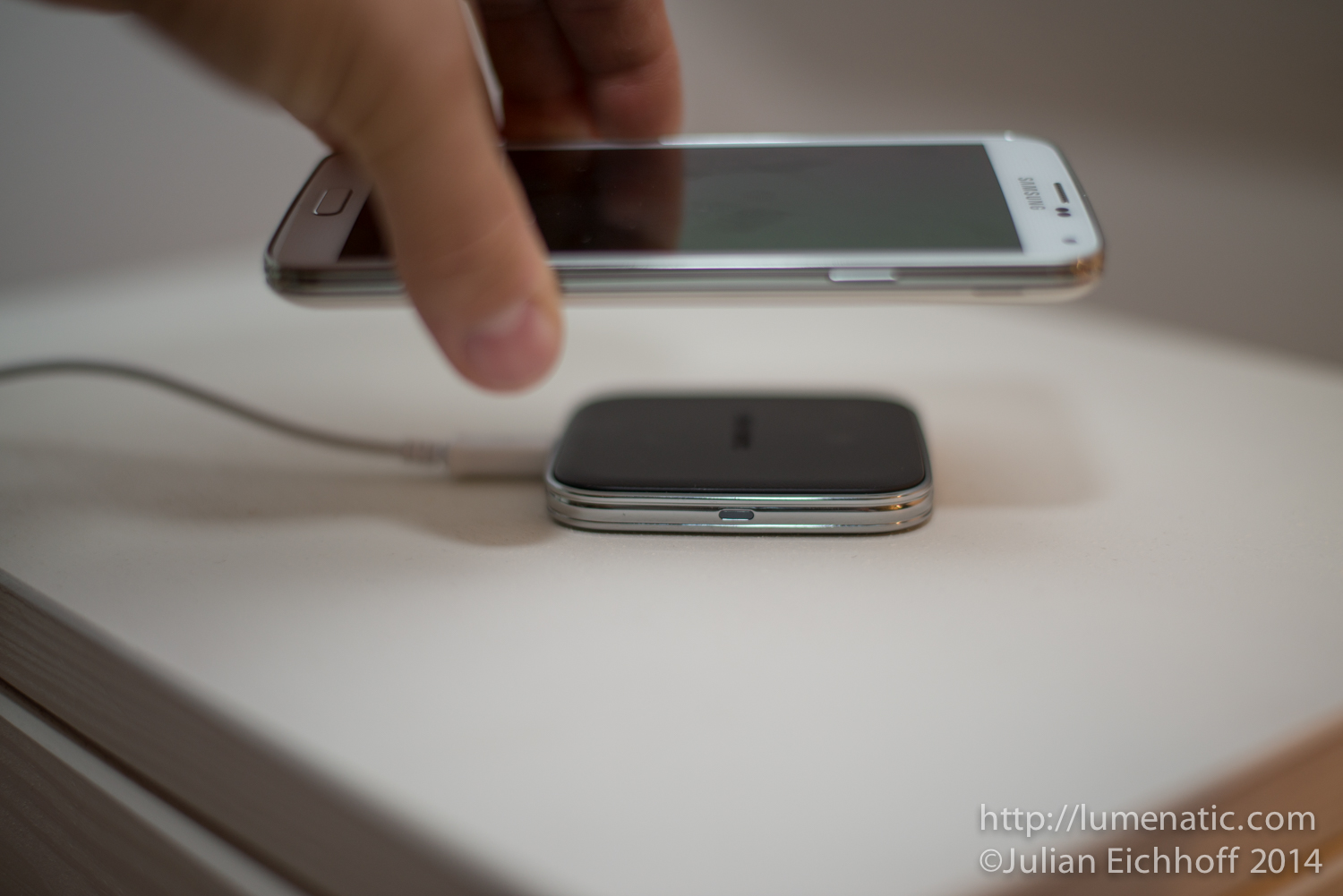 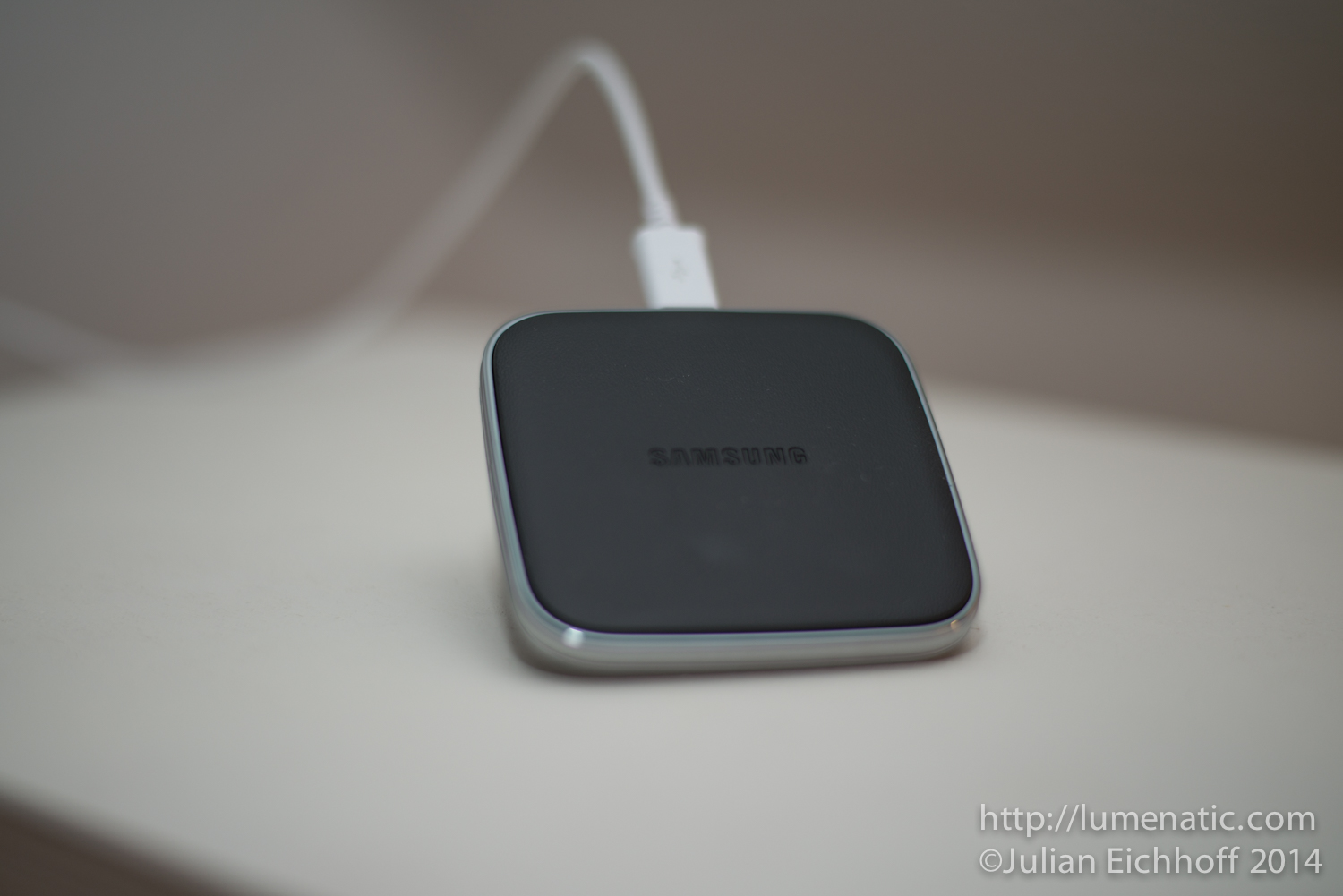 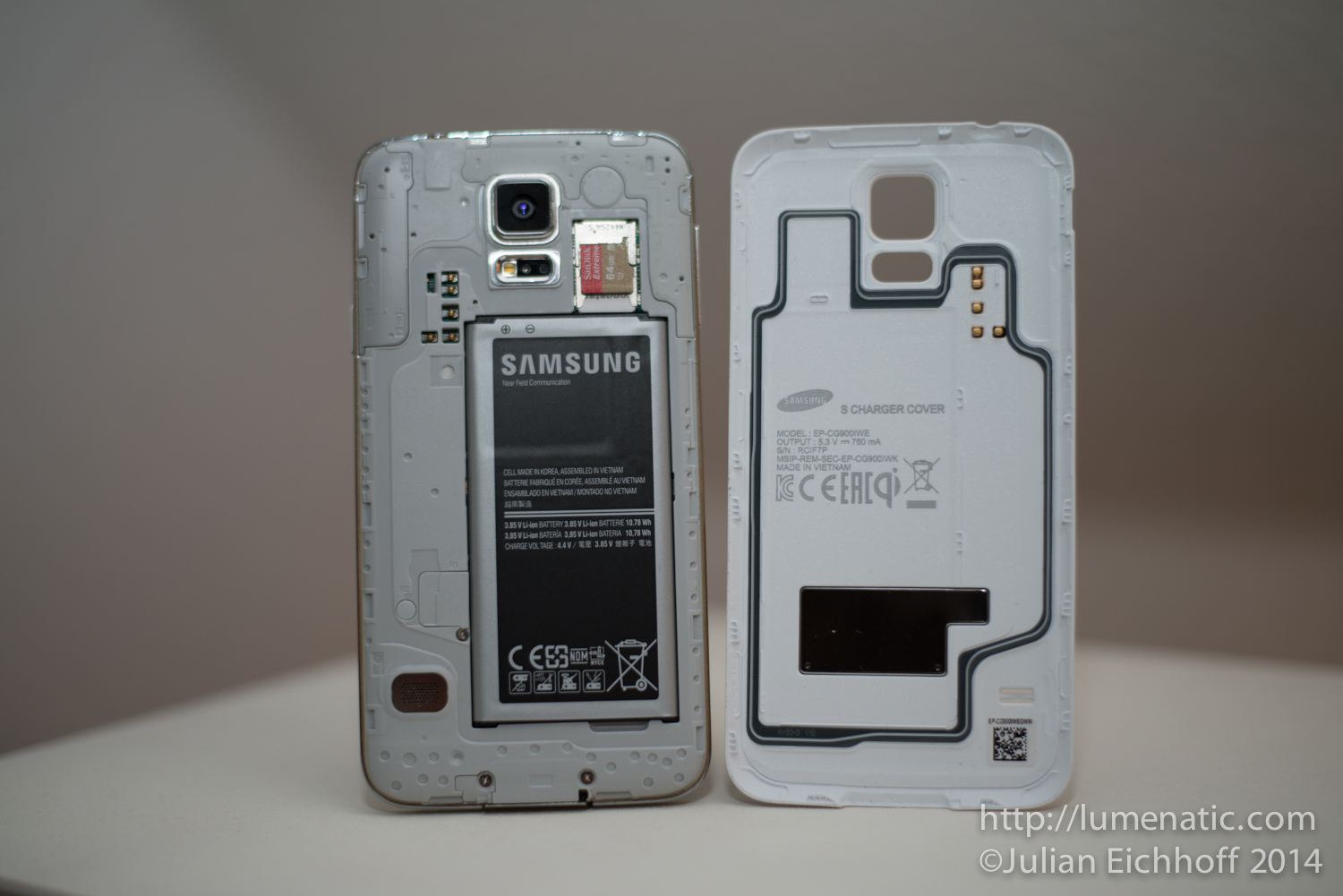 IP67 certification, aka watertightness. The IP XX scale is a system to describe how well an electronic product is protected against dust and water. IP67 means that you can submerse the phone in water and it won’t take any damage. Note that this does not mean you have bought yourself an underwater camera ! The certification is valid only for fresh water, a depth of 1m and a submersion for an hour maximum. It means that your phone is safe when you use it in the rain, or when you accidentally pour some water over it or if you are kicked in the pool at a party.

Other technologies like near field communication or 4G support are now found on iPhones, too, but Android devices did have these features much earlier.

Bottom line
I have made the switch from iOS to Android and still don’t regret it. It is too early to draw a final conclusion if switching was a good or bad idea – I own the Galaxy S5 for only three weeks as I write these lines. But from what I have seen and experienced in the day-to-day use so far is convincing. The phone did not cost a fortune (and I got a flagship smartphone, other models are even less expensive). The migration was not as gruelling as iPhone users might expect and I have more freedom on my device (that’s an opportunity as well as a risk).