My motorbike photography mania continues. Last week I showed a BMW R 1200 GS, today a Suzuki GSX-R 750 is our model (in fact, both bikes were shot during the same session).

The bike belongs to a colleague from work. From day one when I first saw the GSX-R in that particular color scheme a voice was screaming in my head “Photograph.That.Bike. Exclamation Mark, bold italic underlined flashing red”. I don’t know what it is, but I am totally into that black/yellow combination. It just looks a-w-e-s-o-m-e.

Enough drooling. I asked my colleague if he wanted to have cool images of his bike and showed him photos from past shots. He immediately agreed. On the following Saturday he came to my home and, following the BMW, his bike was being photographed under my carport.

Here is the setup: Two Quantuum R600+ studio flashes dangling from the carport ceiling, triggered with Yongnuo radio triggers. A black backdrop was installed behind the bike. Tip: Take care that the cloth forms a straight line on the floor, otherwise the border between floor and background has to be repaired in post.

What you don’t see in the image: Andreas, the dude with the BMW, is standing behind the backdrop system and supports it. That was heavy work. It was a windy day and those 4-6 square meters of black sail exert quite a force, even when a soft wind is blowing. Note: When we shot his BMW I did not use the backdrop system because I thought that I could manage a black background without the cloth. Which was a fatal error as I had to learn the hard way in post (keyword of doom: spoke wheels).

The Suzuki’s yellow parts come out nicely in the shots, but the side of the bike was too dark for my taste. I had to introduce additional light sources and decided to use a reflector (operated by Manuel, the owner of the Suzuki) and a SB-700 flashgun with a Lumiquest softbox attached to soften the light. That brought out the details of the bike nicely, see above.

That shot was the one I had in mind since the day I saw the Suzuki, see above. I am very happy with the image, because it worked out exactly the way I envisioned it.

I captured many angles and shots of the GSX-R, moving around the bike, going at eye-level and lying flat on the ground. I am glad that I was smart enough to get Andreas and Manuel to hold the black backdrop every time I moved to another position. That way I could capture various facettes of this amazing bike.

Let’s talk about the subject of the bike’s angle for a moment. Please take a close look at the following two shots. 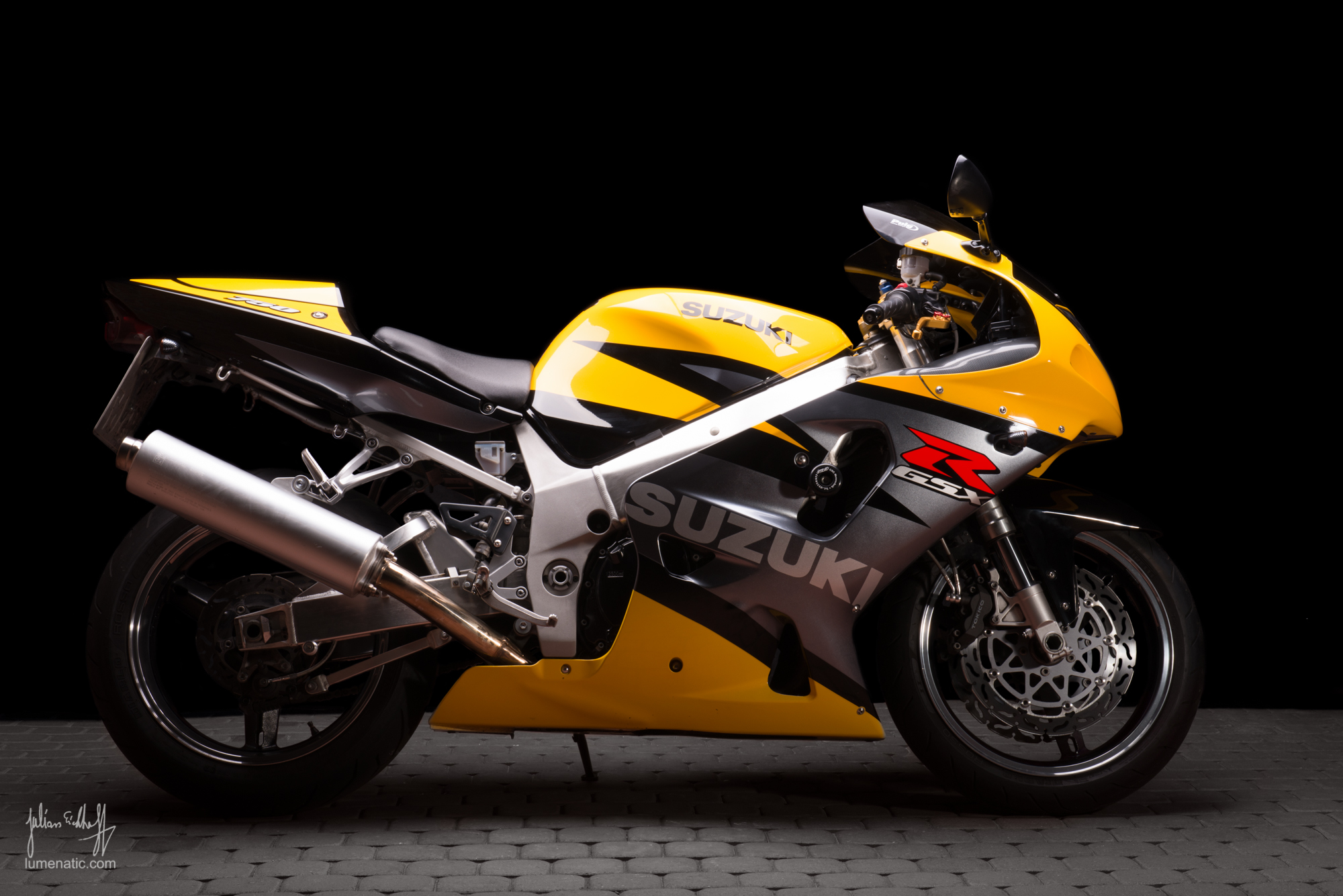 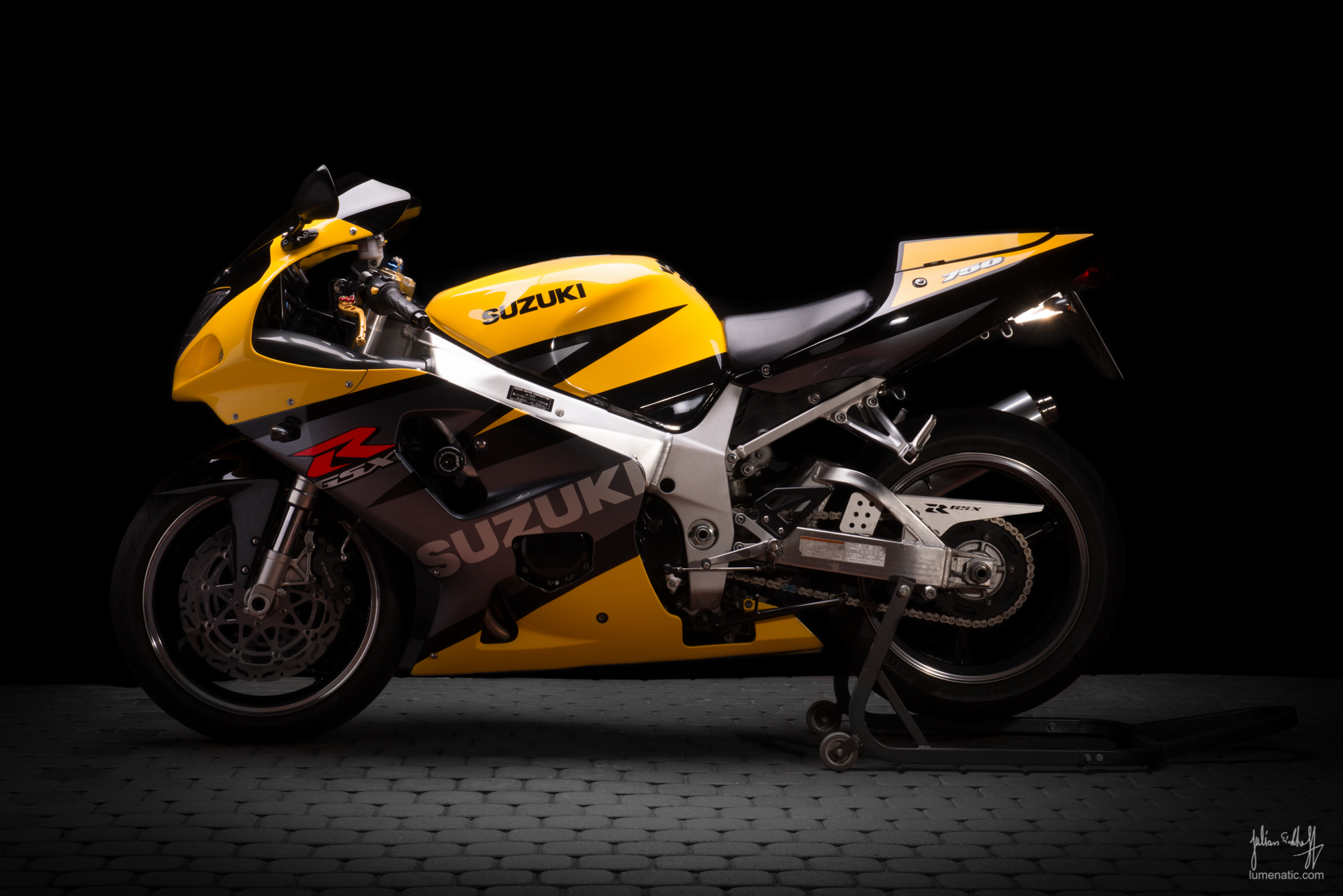 On the image with the bike facing to the right it rests on the side stand, leaning a little bit away from the camera. On the other image (bike facing to the left) you can see that the bike is mounted on a rear stand. The rear stand makes the bike standing upright. It is not distorted and thus looks a little cooler in my opinion. Resting on the side stand makes it look a little compressed and… boring from that perspective.

Post processing involved painting the background black, repairing a few dirt spots (not many, Manuel dod a good job at cleaning his bike, thumbs up !) and desaturating the red bricks of the pavement.

Here is a gallery with all other shots I edited. 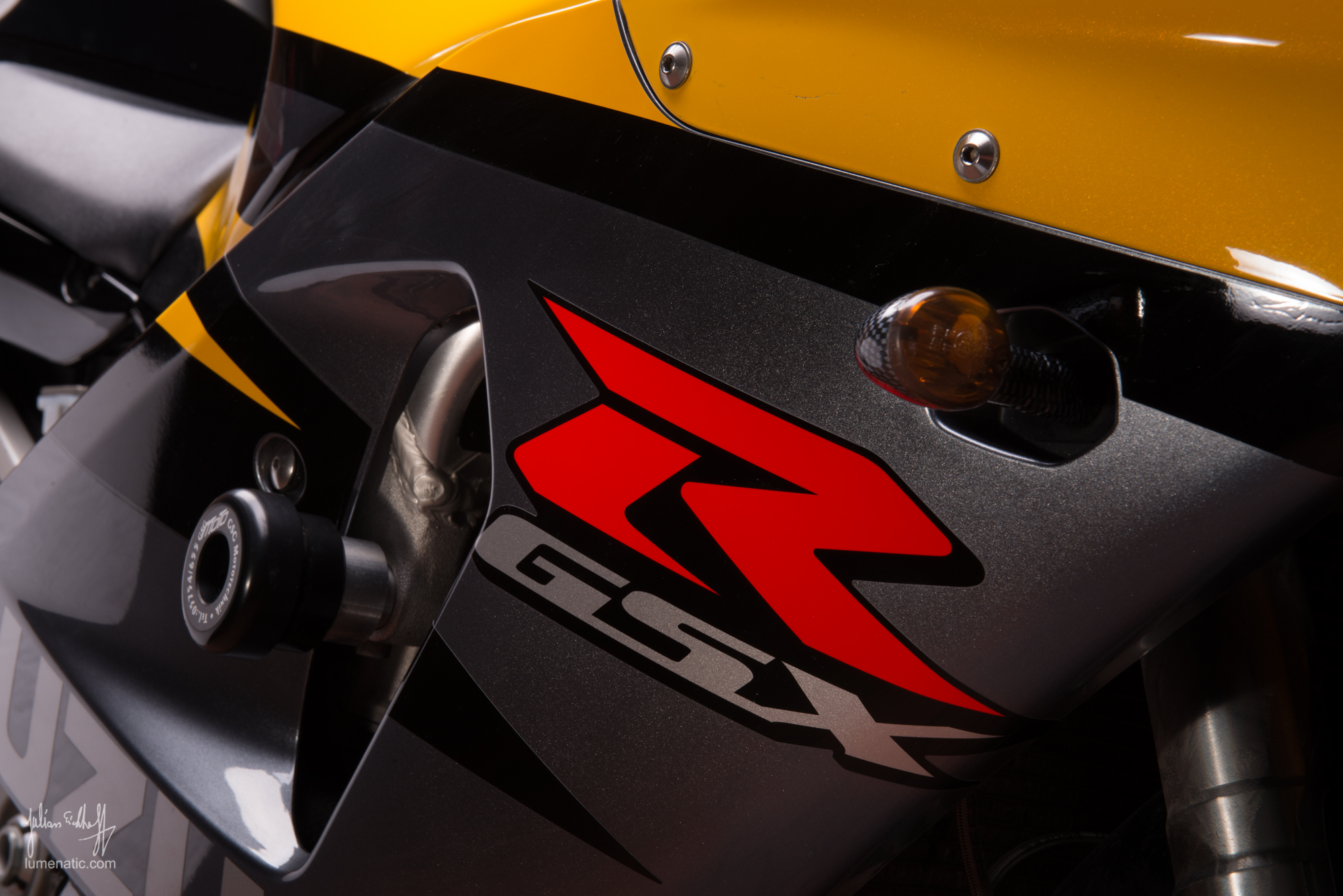 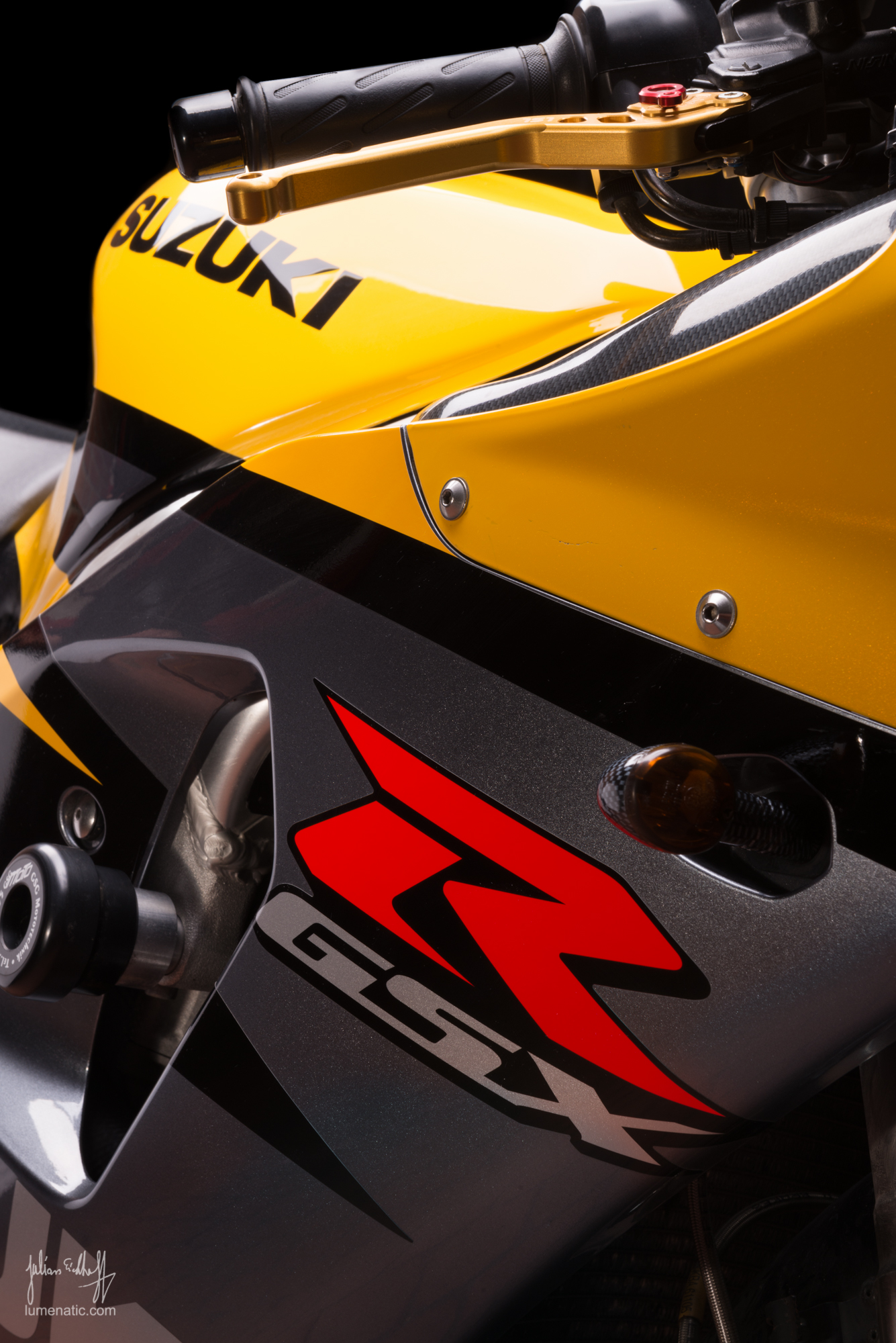 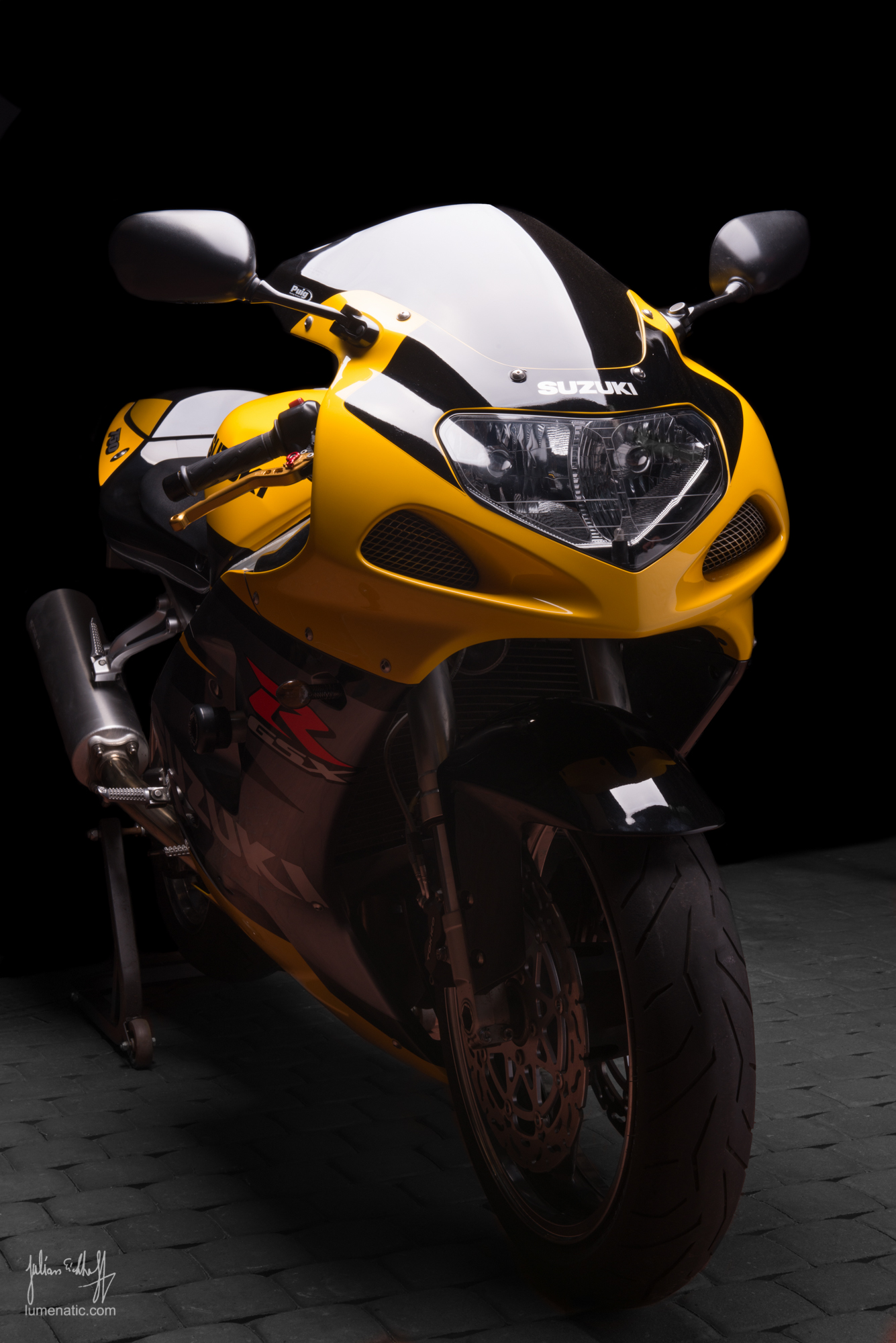 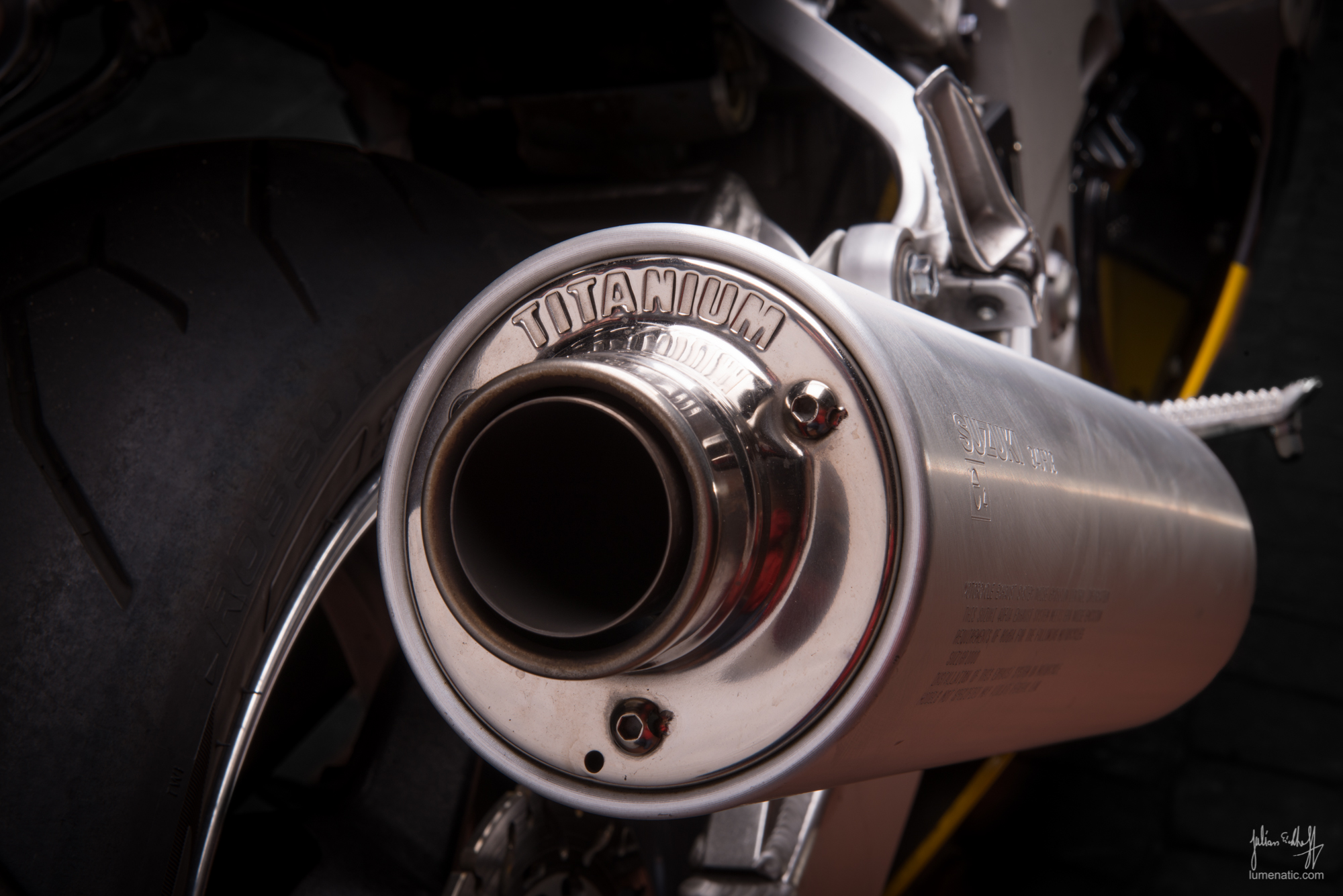 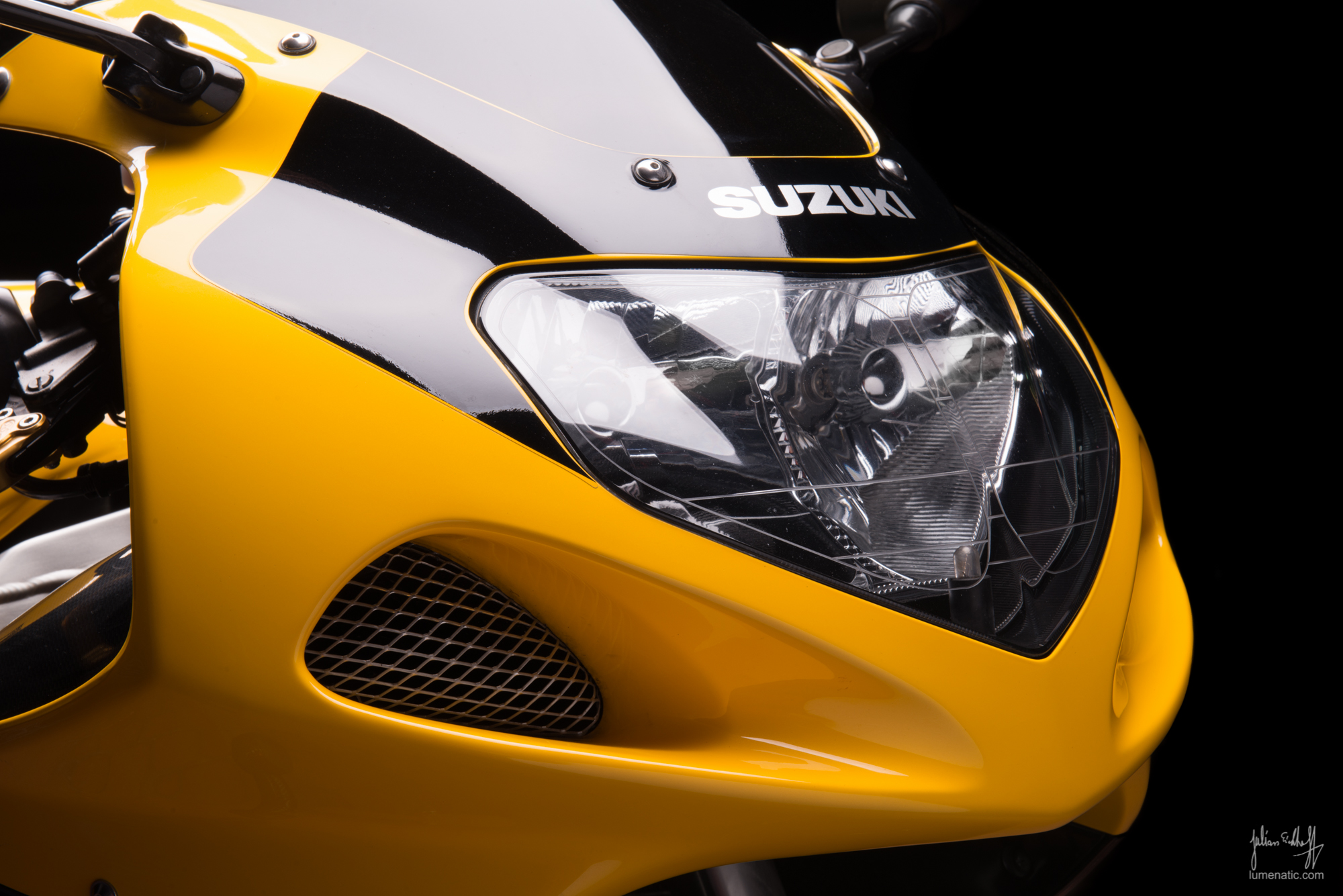 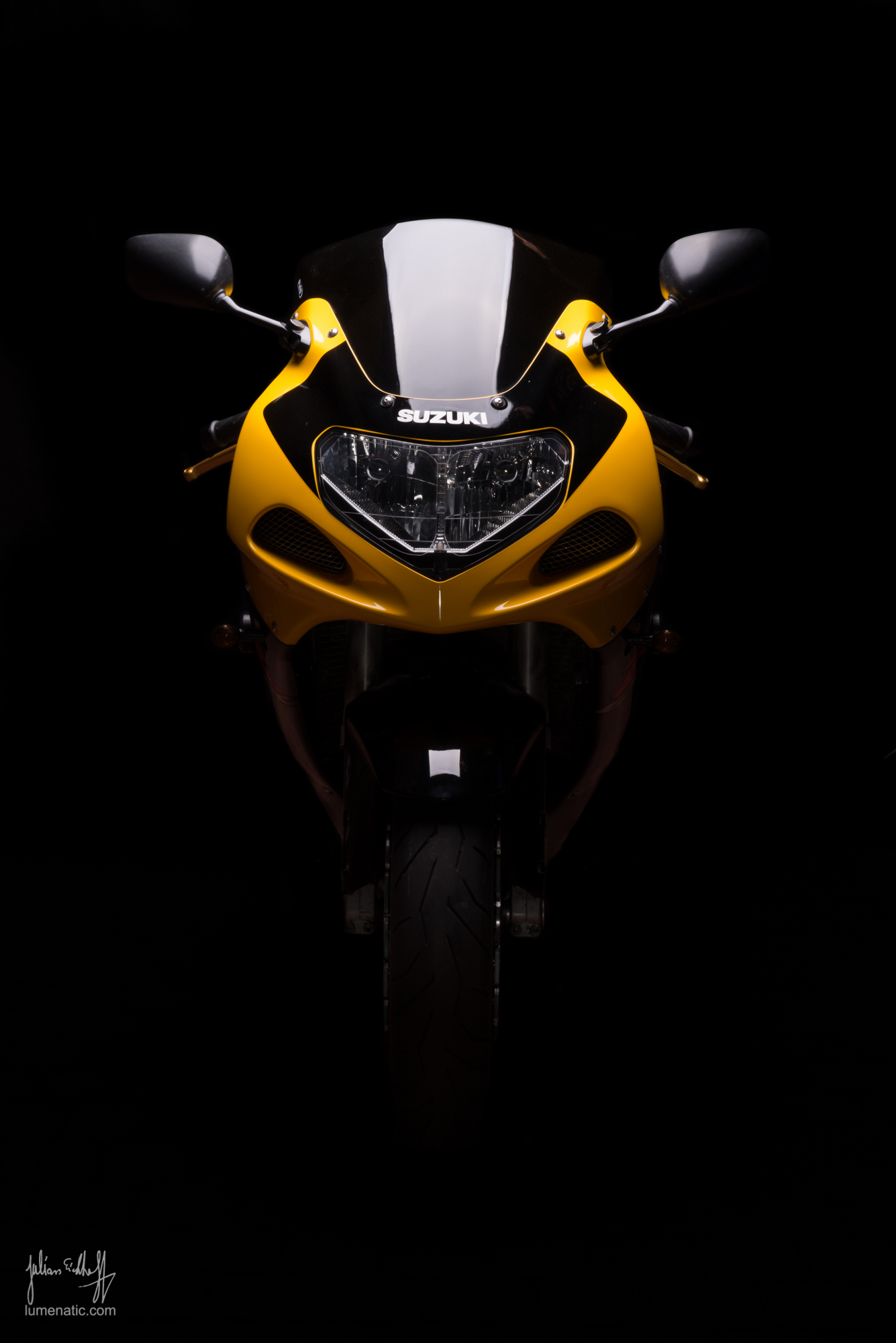 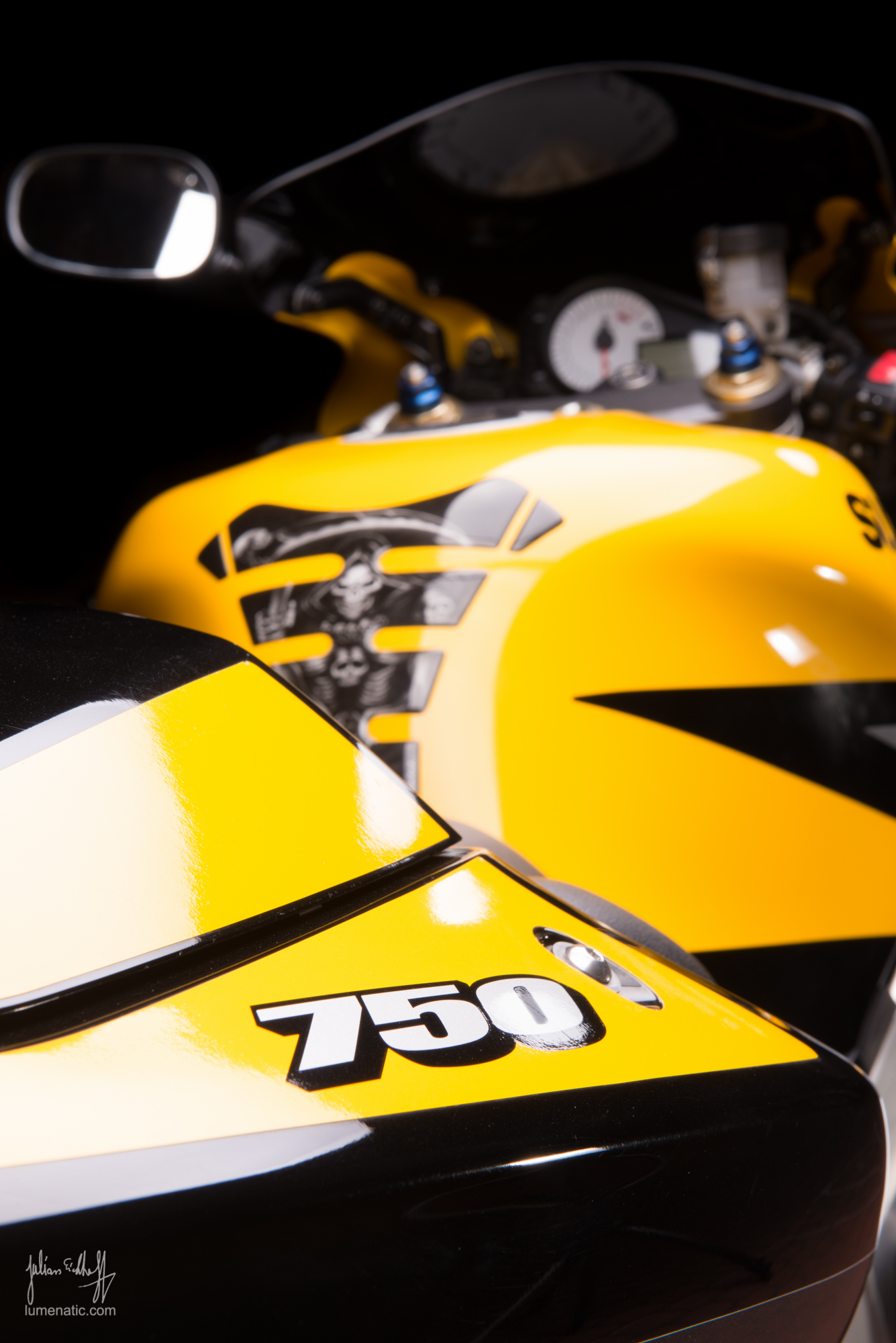 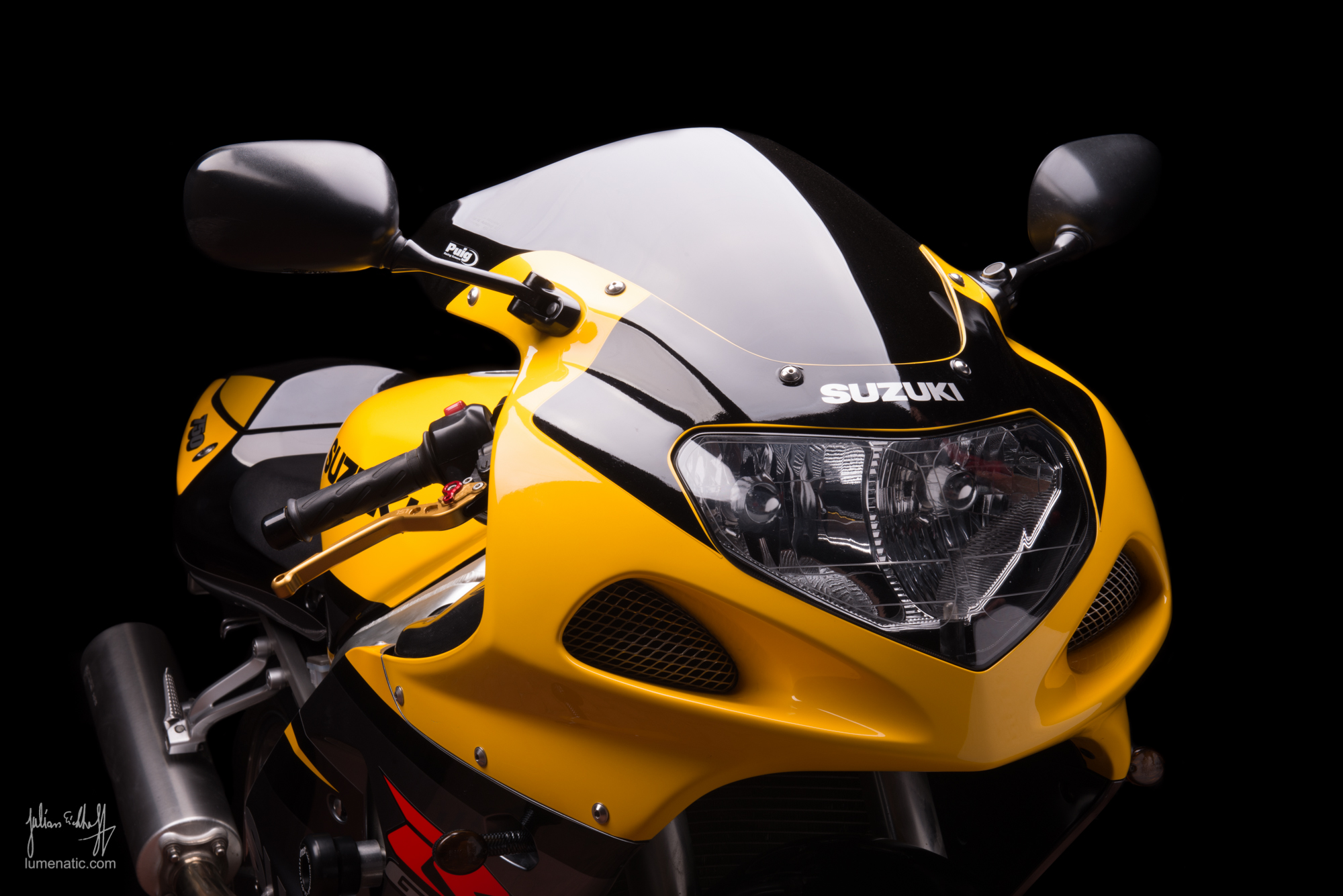 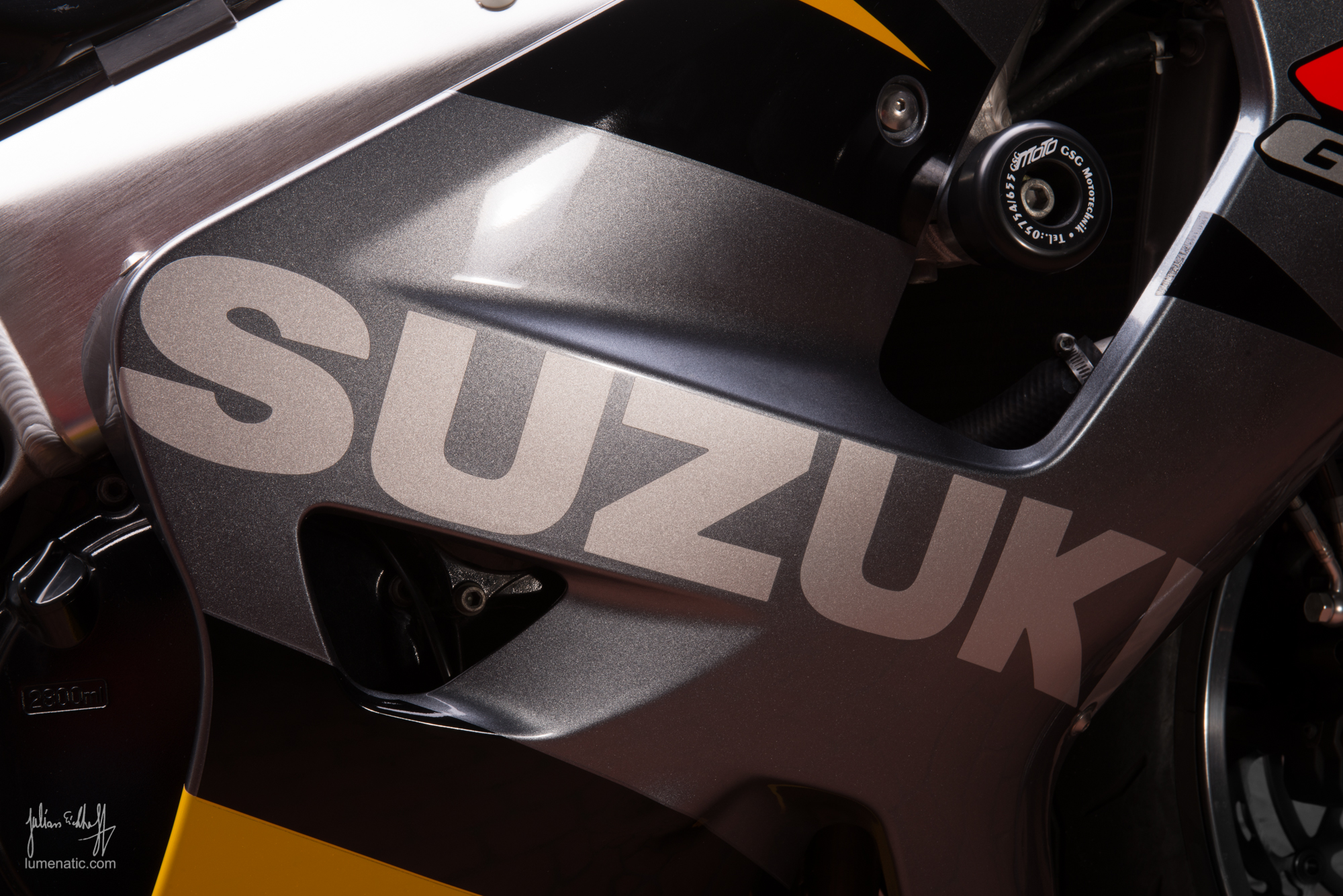 Bottom line:
Having patient assistants during a shoot is immensively helpful. They will move around reflectors, flashes, help repositioning the bike, fetch stuff and make your workflow truly effictient. Using a black backdrop is always a good idea when you want to have the background black, everything else is pain in the a$$ when it comes to editing.

The motorbike season is over, but I am planning action shots of bikes for the next year. Some thinking has to go into the circumstances (where, how, who, safety), but there’s a long, dark winter ahead of me to solve these questions.