Location scouting for the next motorcycle photoshoot

In preparation for my 2016 photo projects I conducted a location scouting trip. The goal was to get some test images to see if a decent perspective and framing can be achieved.

The location in question was half an hour away from where I live. In the Hanover region there are numerous potash mines, some still in operation, some shut down. The mining activities resulted in huge mining waste heaps, which form impressive landmarks in the usually totally flat north German landscape. One of those potash heaps caught my attention on previous drivebys: It is absolutely white. Having a white mountain standing in plain and otherwise mountain-free environment is an impressive sight, which would make a great photo backdrop.

I started scouting the location on Google earth. That gave me an idea which roads I could take and where promising photo locations could be. I also took into account the cardinal direction of each position. Having the potash heap in western direction for example would give you the opportunity to photograph a blue sky during magic hour.

On a cloudy Sunday I geared up and drove off. Since rain was supposed to fall later that day, I did not expect to produce presentable images. The images I had in mind included a bike before a gleaming white potash heap against a steel-blue sky. However, it came out differently. Once I arrived at the location I was disappointed. The potash heap was not white, but grey. It looked dirty. Then I remembered what one of my colleagues said before the trip: “The heap is only white when dry. Once rain falls, it turns into grey.” Since rain fell during the night the colour was not a surprise.

I like the composition of this image. Road, grass, potash heap and sky form four stripes which divide the image.

Circling the potash heap I found my first location. From that side the heap was part-grey-part-white, since the flank facing the sunlight had partly dried already. Ok, at least the heap is a little white from here. The sky was far from being blue, dark clouds filled the sky. But I was lucky – behind my position the clouds were lighter and the sun came through. That situation provided an ideal shooting setup: Spectacular clouds in the direction I was shooting, sunlight behind me.

Please note that the first image in this post was made with my phone (Samsung Galaxy S5). I am quite impressed with the result (Side note: I wonder what effects the introduction of the dual-lens technology [LINK] will have on the camera market. Side note end). Some of the images were taken with my phone, but I also had my D750 with the 70-200 f2.8 lens with me.

During the scouting trip I drove around the potash heap and took test images in every location. In total I checked eight positions. Having the opportunity to instantly view the results on your camera / phone empowers you to decide on the spot which location works and which does not. In each position I moved the bike around several times to get a different composition of the image. 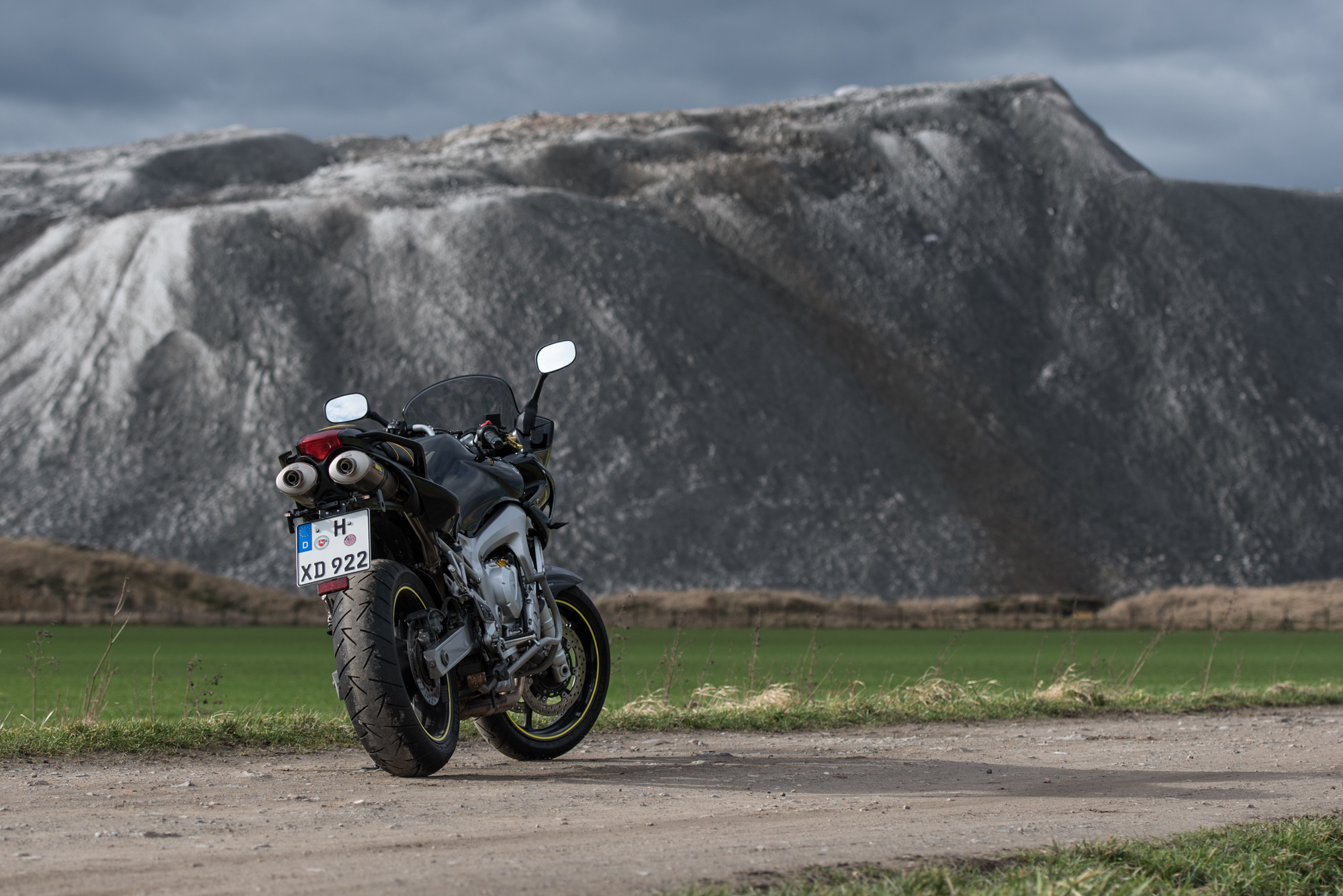 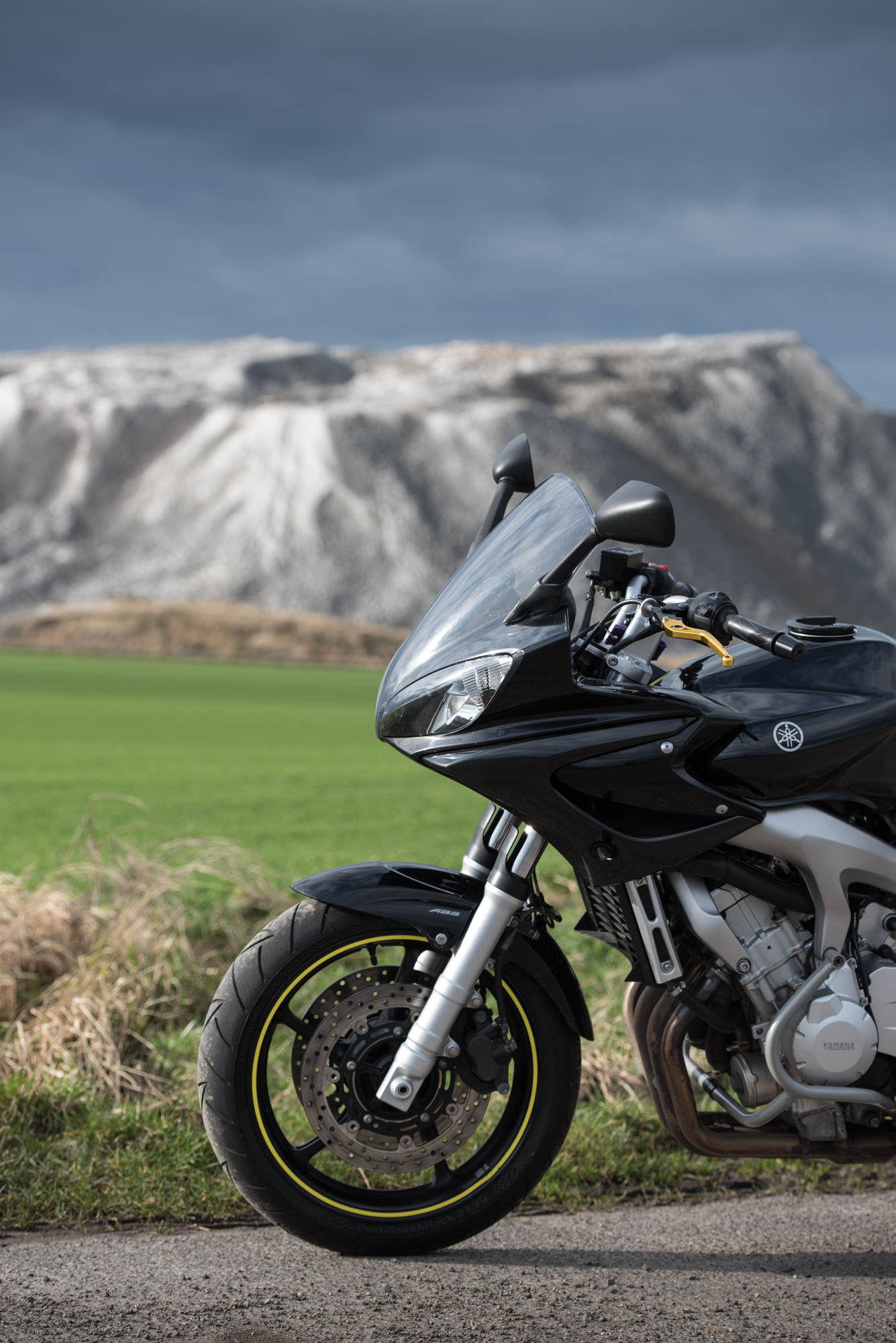 Bottom line:
I set off with the expectation to receive “only” test images. I came home with a good understanding of the location and some images which I deem worthy to be shown on this blog. The trip showed me once more that to be flexible is necessary. I encountered different conditions than I planned to shoot in (potash heap not white, sky not blue), but by welcoming these circumstances I was able to take some satisfying pictures. The next step will be to rally one or two other bikers and conduct a “real” photo shoot at this location.