You know what I said about noon. Harsh sunlight, not good for photography, go into the shade if you must take images in such conditinos. And don’t photograph against the sun, your subject will just be a dark silhouette against a blown-out sky.

I chose to break with those “rules” and went out for a test shooting. The goal: Taking decent images of my bike in direct, hard sunlight, photographing against the sun. I took two flashes with me a SB-700 and a SB-910. I drove to a small parking lot in the neighbourhood and set up my gear.

I placed the flashes on the ground, refer to the attached sketch. The camera was set to 1/200, f/20 (to receive a decently lit sky) and ISO100. The flashes were set to TTL with EV +3 (full power against the sun). 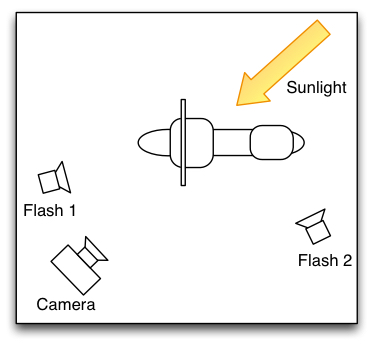 To prove my point I needed the sun to be in the shot. It was noon and the sun was at its highest point. To include it into the shot I needed to go really wide-angle, 14 mm in this case. Ready, aim, fire. Result see below.

The sky is blue, the surroundings are well recognizable. The bike has been illuminated by the flashes, revealing every detail. It is not the most flattering perspective (the front of the bike looks odd), but the main target has been achieved. Post processing included the removal of a few cars parking in the background and subtly lightening the black parts of the bike, especially the front and the tank. After all black is a difficult colour (yes, technically black is not a colour) to photograph, so a little Lightroom magic had to be done.

I switched location to get a few more shots. A similar setup has been used – bike propped against the sun, two flashes firing against our celestial lifebringer. You may notice that albeit pointing the camera directly into the sun there is only minimal lensflare. Well, that is one rare situation where gear matters, as much as I hate to say it. I used the 14-24 mm f2.8 lens, which delivers an out-of-this-world performance in terms of sharpness, minimised lensflare and minimised distortion at wide angle settings.