The VT 1100 Honda Shadow C3 (what a bulky model name by the way) is a luxurious chopper radiating the spirit of freedom. Its 1100 cc engine delivers only 57 HP, but choppers aren’t built for racing, are they? The rider, Björn, suggested a location about half an hour away from where I live.

Let me say in advance that this was a shoot to remember. I’ve had many good shoots, but this one blew my mind (sorry for using this quite stressed metaphor, but it is just the right expression in that case). We met as the sun was setting and I set up my equipment. Let me just show you the first image I got on that shoot:

That is an image out of camera. No retouching.

And now you might understand, why I started celebrating. Remember I only employed two flashes for this shoot ! The following two images will show how dramatically those two flashes change the image: 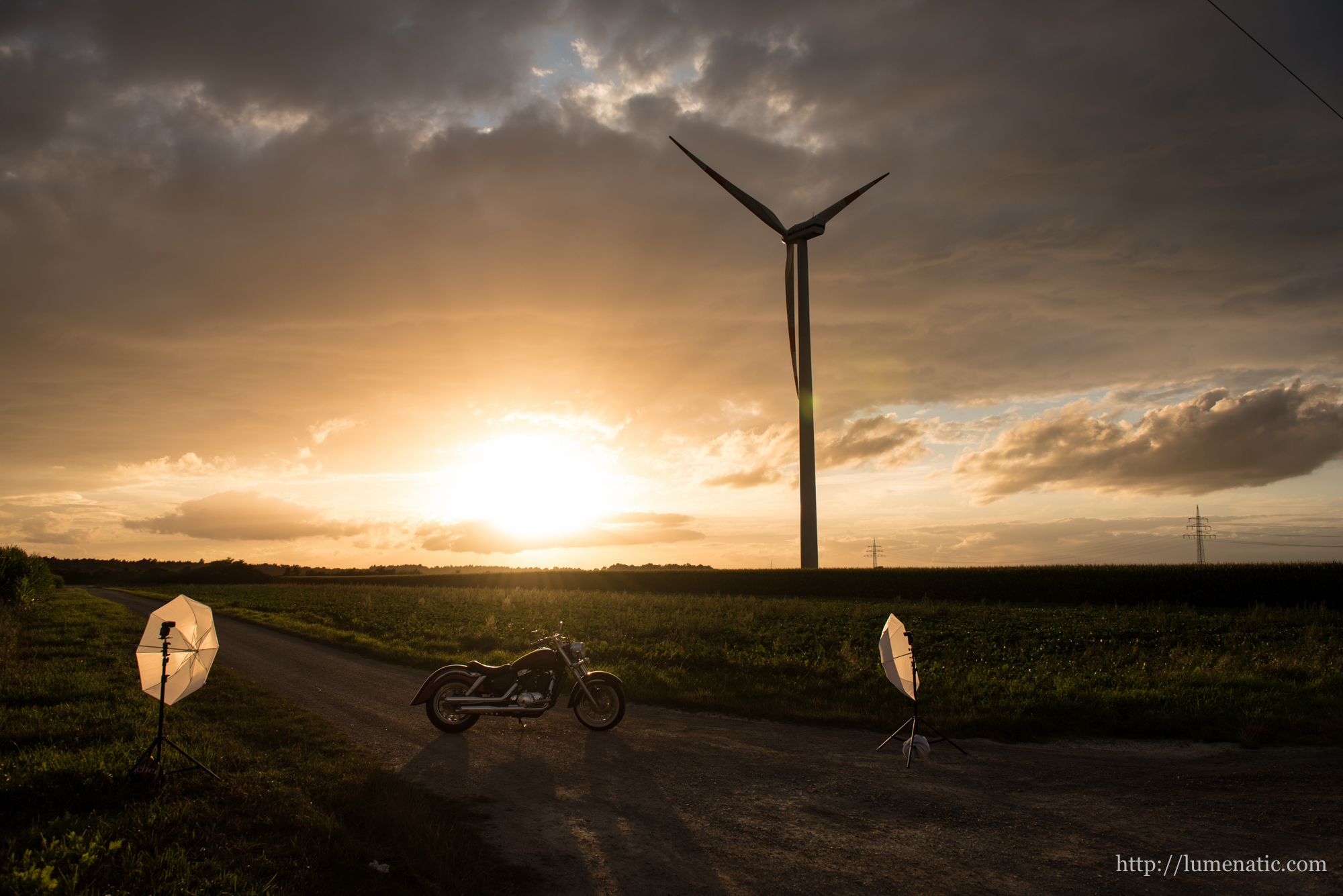 Sunset does not last for long, so you have to work fast. Move around a little, make different compositions. I made several shots, including the windmill in some shots, leaving it our in other shots.

Then I asked Carsten to pose with his bike. When doing so, ask the rider to take different positions, on and off the bike, with sunglasses on and off, with and without helmet… the possibilities are endless.

And here comes a lesson on lighting and timing. The following two images were shot at the same location, just 10 minutes apart. The camera settings were nearly identical (the second image with a wider aperture and slightly higher ISO to compensate the fading light). 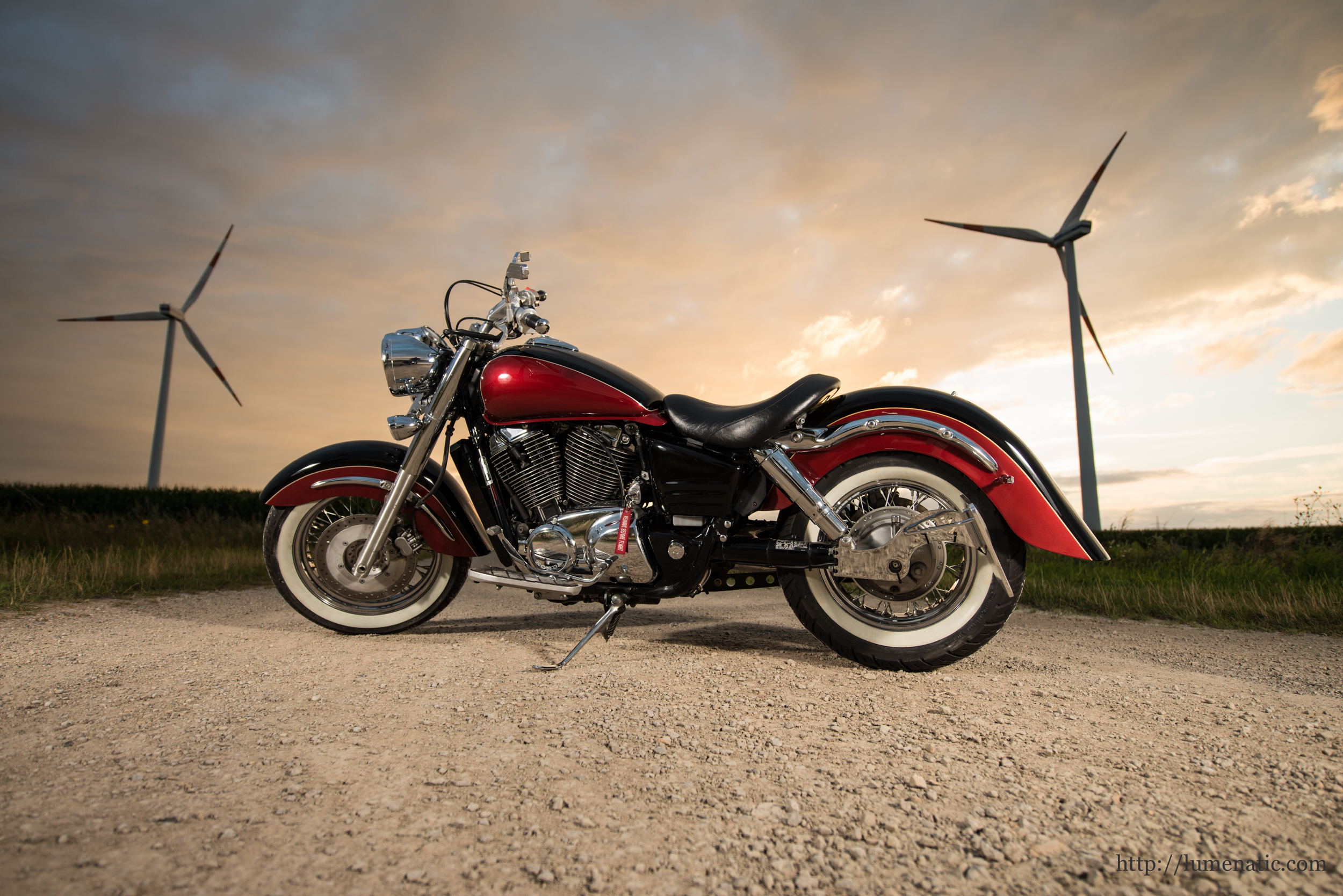 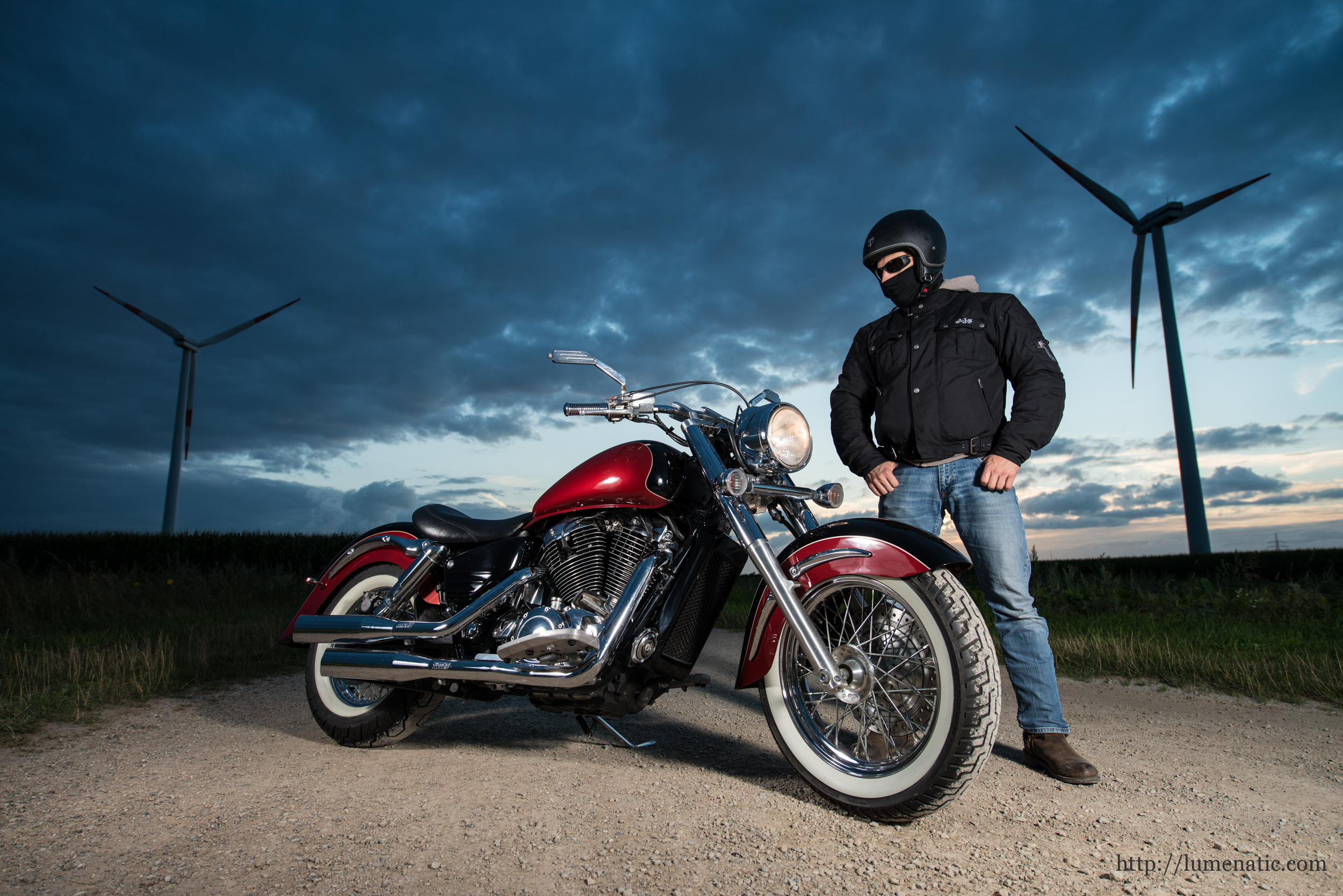 While the first image shows a glorious sunset light, the second image already has a dark blue, magic hour-ly light. Note the colour temperature of both images varies to reflect the atmosphere a little better – the image on the right has been shifted to blue a little.

But besides that only that ten minutes difference will produce dramatically different results and atmospheres.

The photo spree continued and each image came out beautifully. To reiterate: Those images are 98% out of camera ! Adjustments only included setting the colour temperature and removing some powerlines and a rotorblade protruding from behind the bike on some images.

When shooting from a low position, a wideangle lens is the weapon of choice. In this case the Nikkor 14-24mm f2.8 does a fantastic job. The field of view is ultrawide, yet the distortion is comparably minimal.

The following three shots include a dark blue sky. That was achieved by changing position and shooting to the east (the sky in the west is brighter, since the sun sets there, comprende ?).

To sum this shoot up, I was totally thrilled when I saw the images on the LCD screen and I nearly fell of my chair when watching the RAW files on my computer. I’ve rarely had a shoot where the pictures were that good out of camera. Needless to say, Björn is a even more happy biker now.