Recently I bought a new wristwatch. Since I was also looking for a new photo project I decided to make some product shots the lazy way and see how far a camera, a flash and some sheets of paper as reflectors will bring me. You might remember an earlier post where I shot products before an inactive TFT screen. The results I got there were quite good but still on a level where I could show the products on eBay or my blog. This time I wanted to achieve another look and get images which could be used for a magazine or poster ad.

All shots were produced using only a camera, a tripod, a flash with a Lumiquest Softbox III and two sheets of plain white paper as improvised reflectors. I used the my office table as background. The shot you see above was made with the flash being off-camera, standing at the 12 o’clock position. It was angled at about 30° towards the watch. To the left and the right I positioned a plain white piece of paper, folded in the middle to make it stand upright on its own. The paper was positioned in such a way that the two folded pieces created a white “wall” which completely encircled the watch. I used the D800 with my Nikkor 105 mm macro lens for this shot. The camera was mounted on the tripod with the center column in horizontal position. That way I could photograph from directly above.

With a watch like this it is all about reflections. The paper and the large white surface of the Lumiquest soft box determine the light pattern on the watch, especially on the outer ring. I had to play around a little to get the above result, shifting the paper back and forth, tilting the flash towards or away from the watch. It requires some tries, but it’s not rocket science.

Similar in this shot. The paper now encircles the watch from roughly the 7 o’clock to the 4 o’clock position. The camera is still looking directly downward, the flash was hand-held at roughly the 5-6 o’clock position, a little further away than in the first image. Vignette applied in Lightroom.

I am quite fond of that one. The shot was really easy. I suspended the watch from the horizontals column of my tripod with a piece of string, held the camera and the flash in my hands and made some shots in that configuration. Note that a D800 with the 105 mm is quite heavy and one can note shoot like that forever. Holding the flash (to the left of the watch obviously) in your hand has the advantage that you can shoot a series quickly and adjust the light after each shot. Since the tripod stood in the middle of the room the background was already very dark (light going from the flash to the background is dispersed because the background is way bigger and farther away than the flash to the watch). Some brushstrokes in Lightroom did the rest. 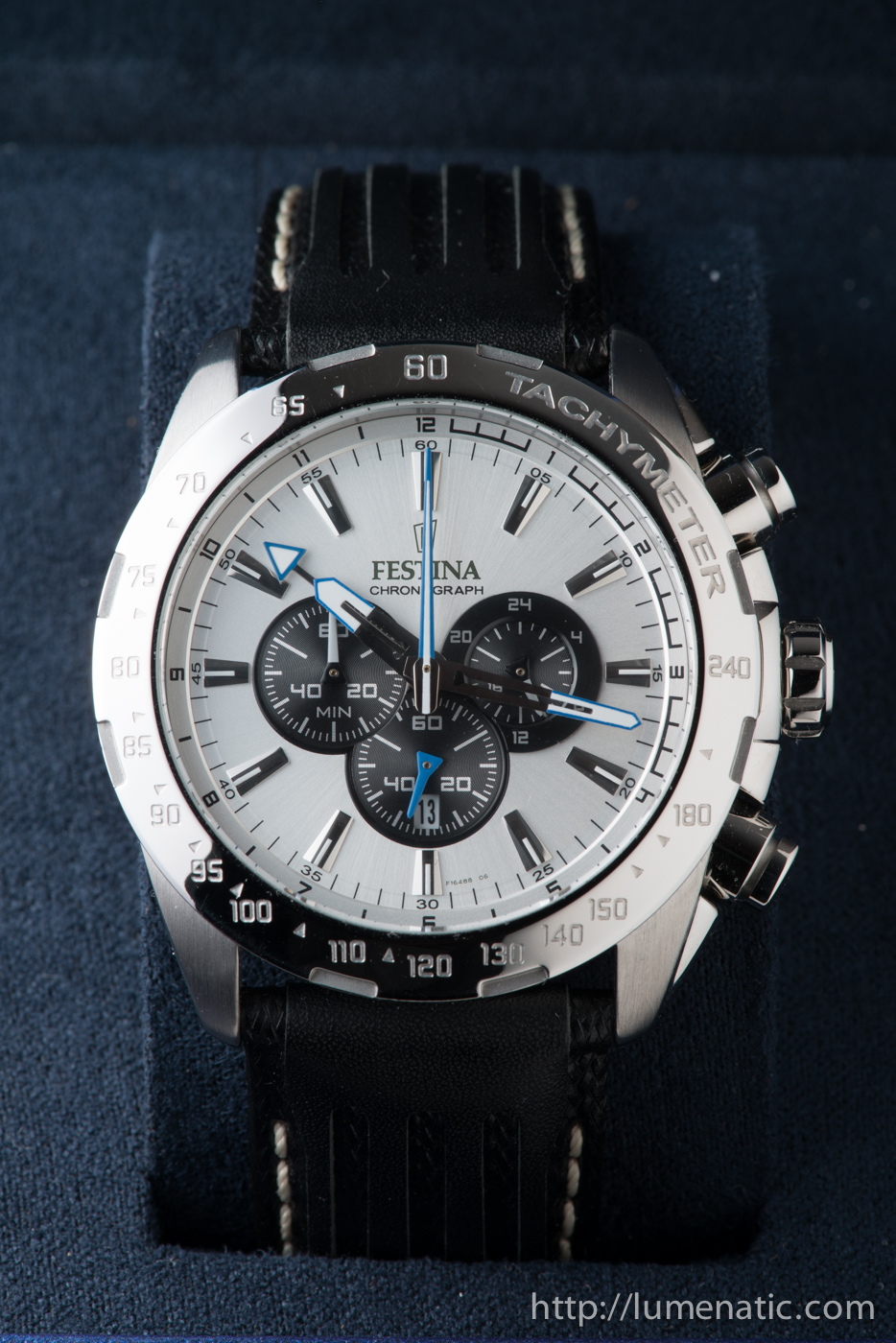 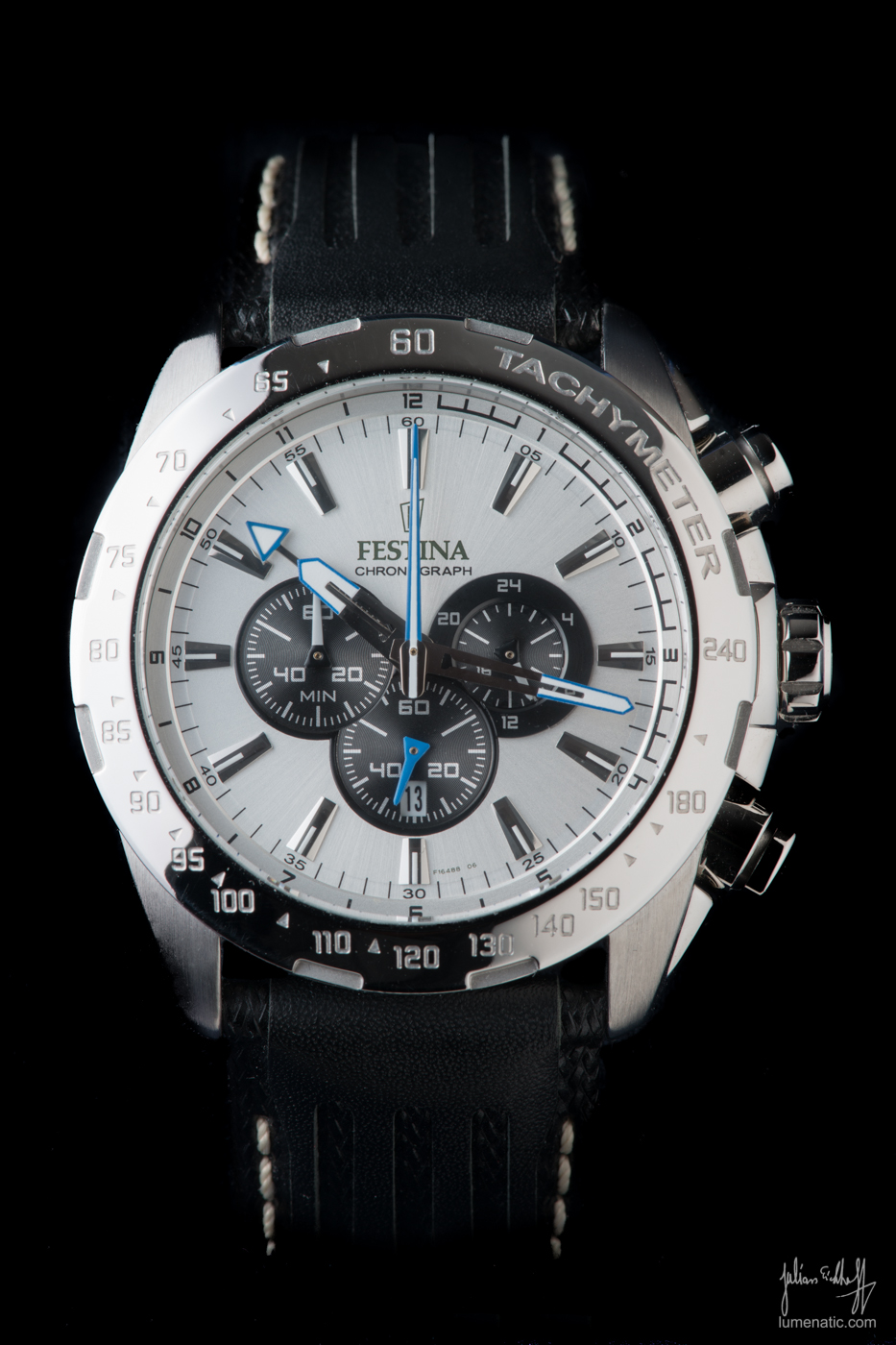 Final setup. I placed the watch in the box in which it came and made several shots. This time the flash was positioned to the left and a reflector (plain white paper) to the right. The result (on the right) is not very appealing since the boring interior lining of the box is visible. Again it’s Photoshop to the rescue ! and voilà, the watch is hovering in the blackness of space.

Final remarks. These shots show the product in an appetizing fashion. I know that for “real” product photos one would do it in a much more sophisticated environment. Also I am totally sure that focus stacking would be applied (=several images with different focus points are taken and the images then layered. The composited image renders every detail of the watch totally sharp. Since I did not do that there are minor areas of the watch not being totally sharp). Another thing what is totally astonishing is the omnipresence of dust. It’s freaking everywhere. And scratches. I wore the watch for a day when I photographed it, and to the naked eye it’s in pristine condition. But on the macro images, especially with a 36 MP resolution, one can see scratches everywhere on the metal. Removing dust and scratches can be partially done during the shoot (dedust the product between shots, polish it with a fresh microfibre cloth), but you won’t get everything. And that is a job for Photoshop again.