This is part 3 of the “Touring Scotland” series, the grand finale.

We toured the Outer Hebrides, starting from Tarbert riding north. The Outer Hebrides are, like most of Scotland, scarce and not densely populated. There is not much vegetation and the landscape is rocky and rough.

We drove to Tobson, which was the northernmost point of our journey. Dominik’s gas guzzling Moto Morini was running on its last drops and there was no gas station in sight! We had to drive back 50 km to the Uig Community Center until we found fuel. It was a close call but we made it. Usually finding fuel is not a problem in Scotland. The country is not densely populated, but it’s not the Serengeti. So with a little foresight and a casual refuel, even when the tank is only half empty, you won’t run into a problem.

Above: Our northernmost point, Tobson.

Just like on the other days we battled the elements and had to put on our raingear. Rain, rain, rain and no end to it – a true Scottish experience !

After a rest and refreshments at the Uig community center we drove to the standing stones of Callanish, which is kind of Scotland’s Stonehenge. The site has been used for different purposes over the centuries and was enlarged several times. We did not stay long (the weather, you know), but yet got an impression of those impressive menhirs.

From the Callanish we rode back to our apartment and enjoyed a dry and warm evening inside.

The next day brought sunshine and dry roads – at last ! South Uist was our destination. In the 1940s a freighter with thousands of crates with whiskey sank just off the coast. The inhabitants looted the cargo and the Hebrides fell into a week-long coma. It is said, that some families still hoard whiskey bottles from that incident until the present day ! Word also has it, that on certain beaches it is still possible to dig up Whiskey bottles.

We visited the beaches, but did not find any Whiskey bottles, what a shame 🙂

On the way back we stopped at one of the gazillion “SLOW”-markings on the road. I wanted to create an image I had in my mind since I first saw these markings. With a slow shutter speed and a steady hand I was able to capture Dominik whizzing past the marking. He drove a totally civilized and legal speed, but the slow shutter speed makes it look like he raced by like a MotoGP pilot.

You can’t go to Scotland without photographing the thistle, Scotland’s national flower.

The other day we drove to Applecross, which is a remote and tiny coastal town. It can be reached by a spectacular pass over a mountainrange, which is fun to drive on a motorbike. 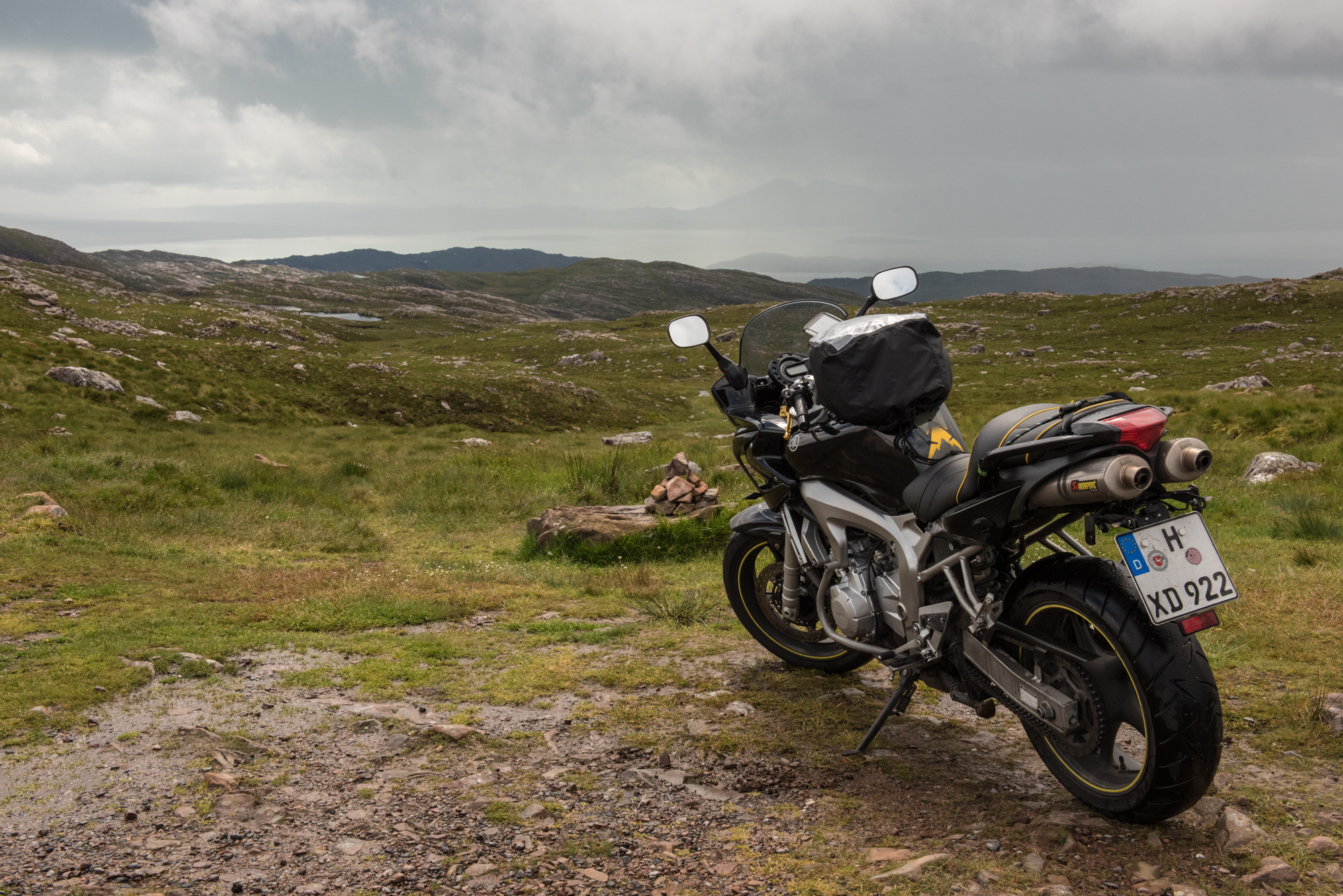 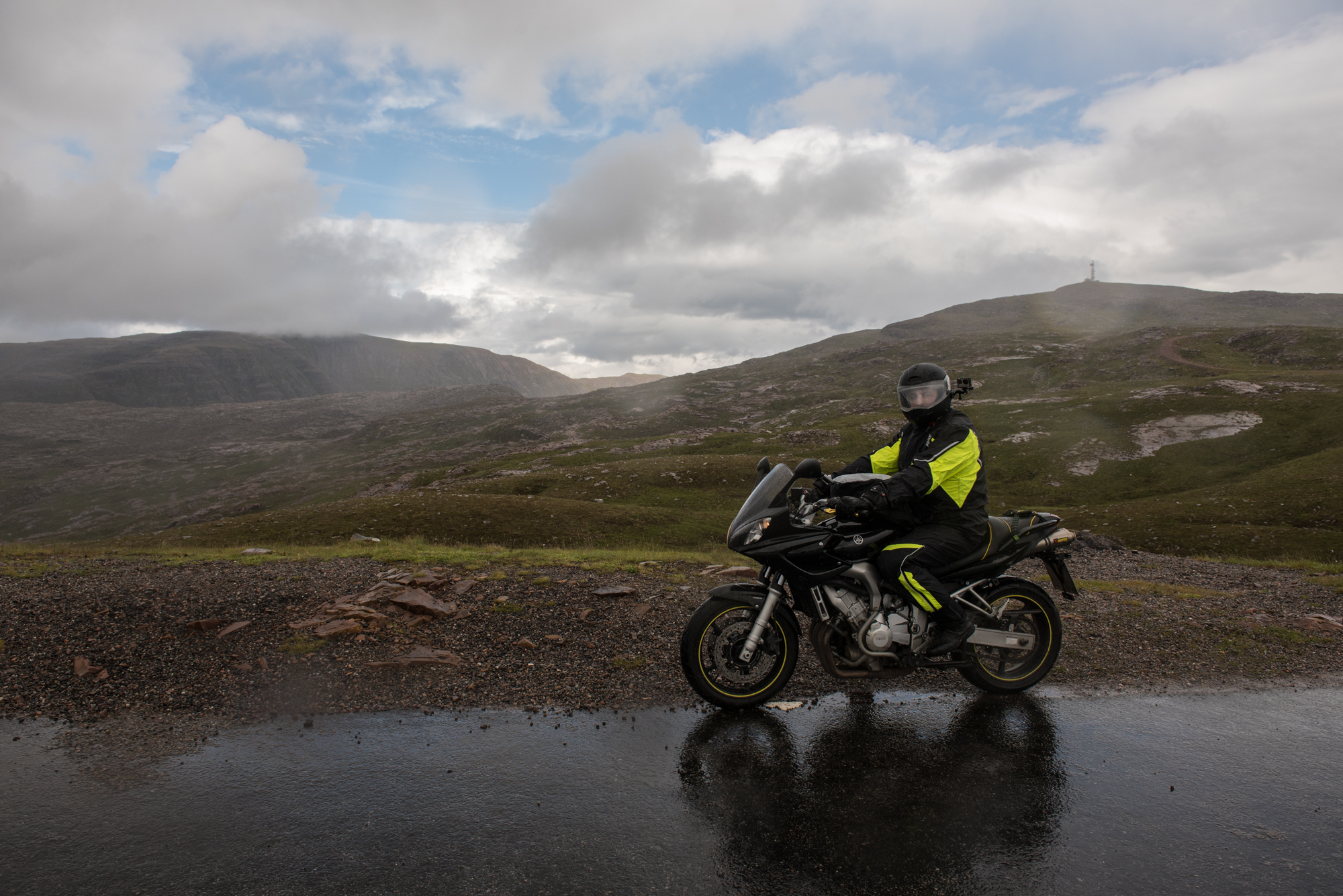 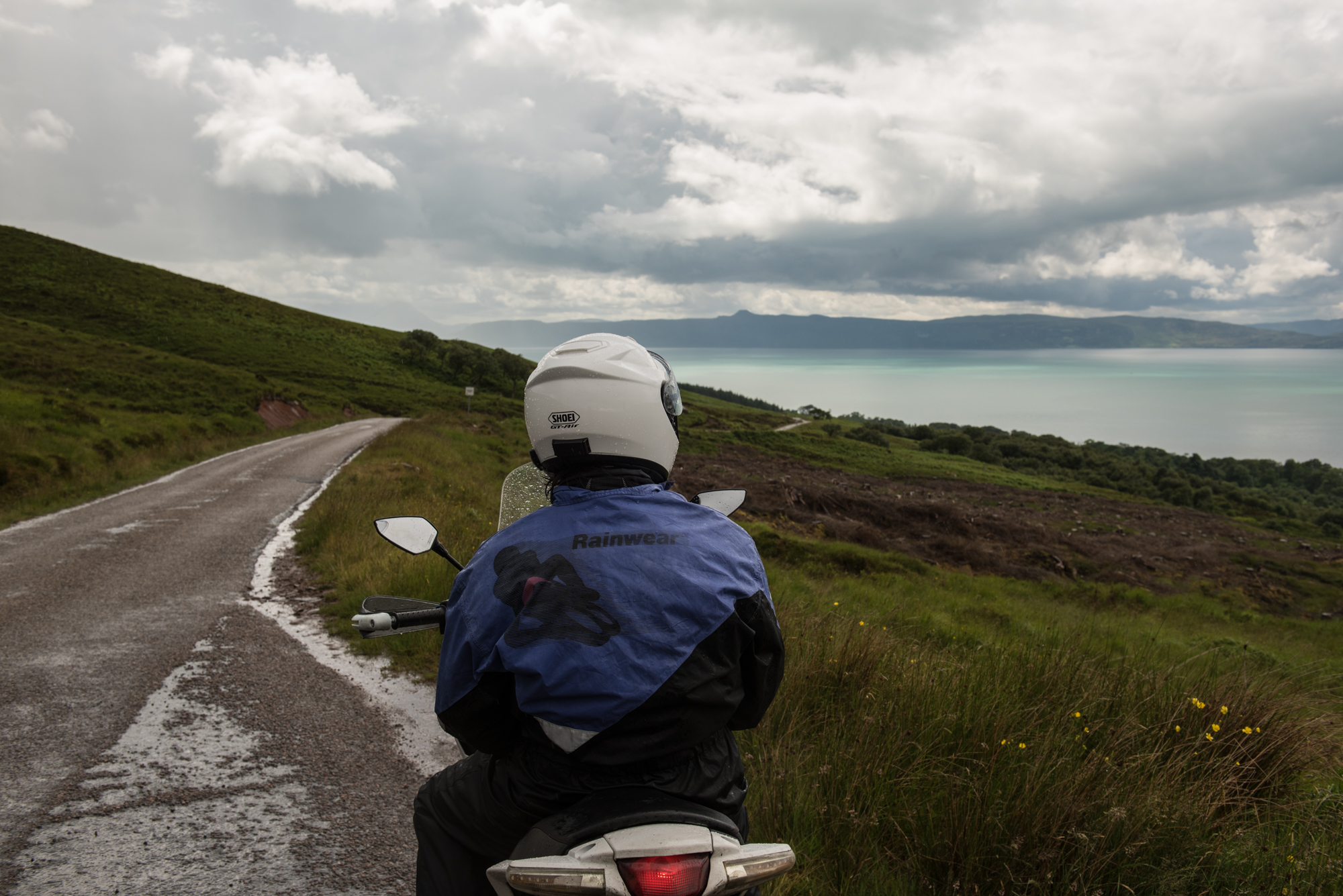 Applecross is really small. The row of houses you see in the first image below is pretty much all of the town. They have a beach with large stones, which encouraged me to build some temporary stone art. 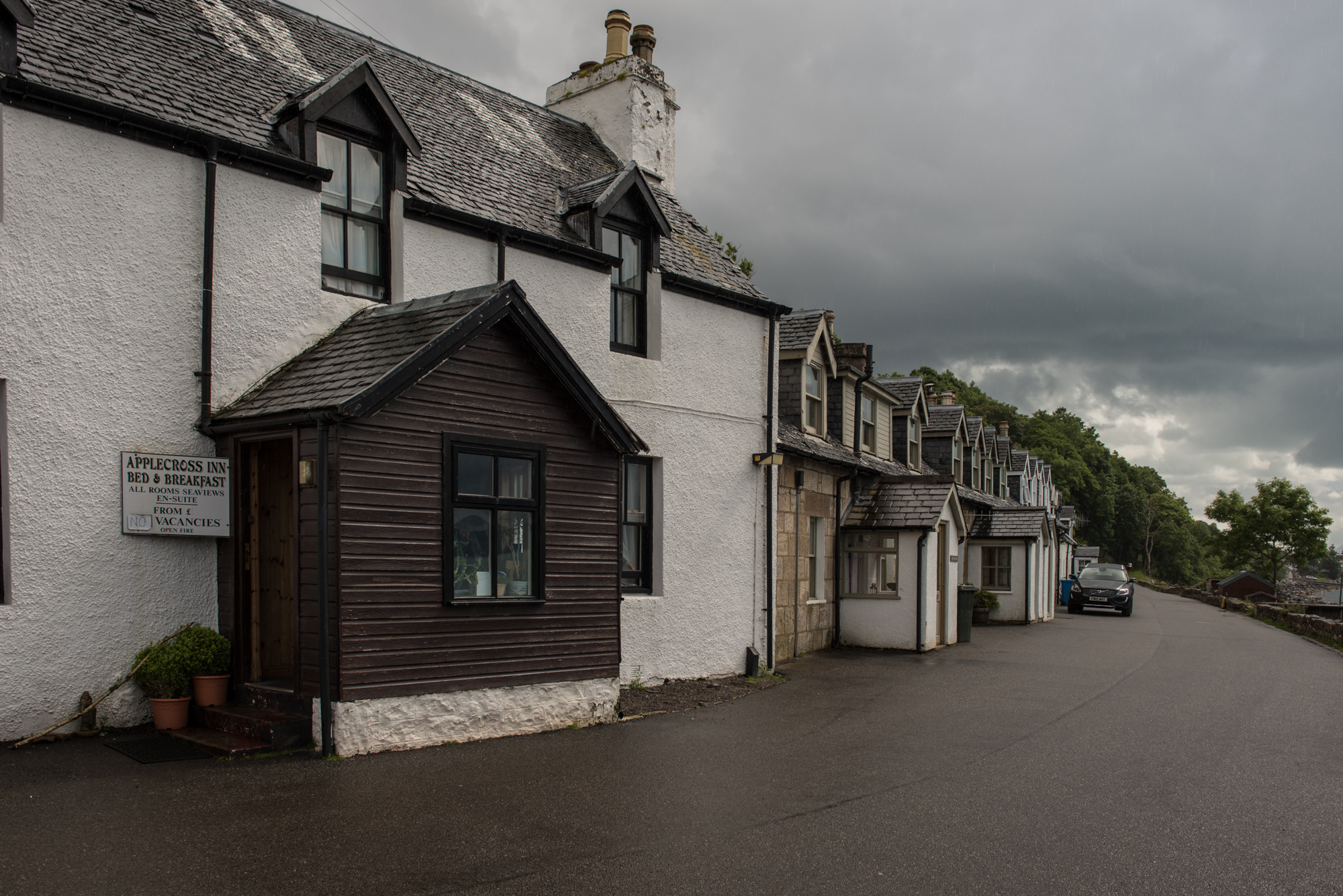 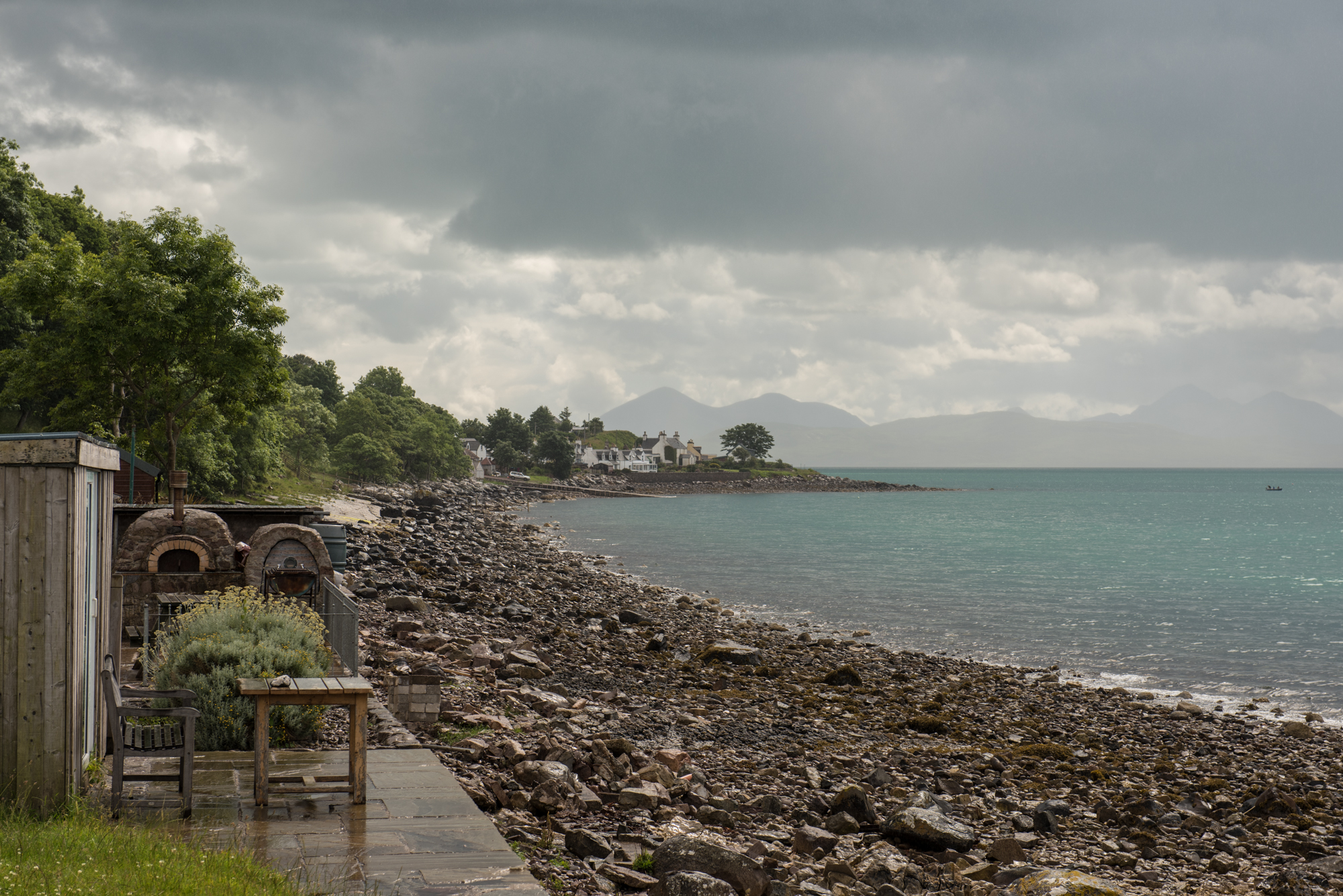 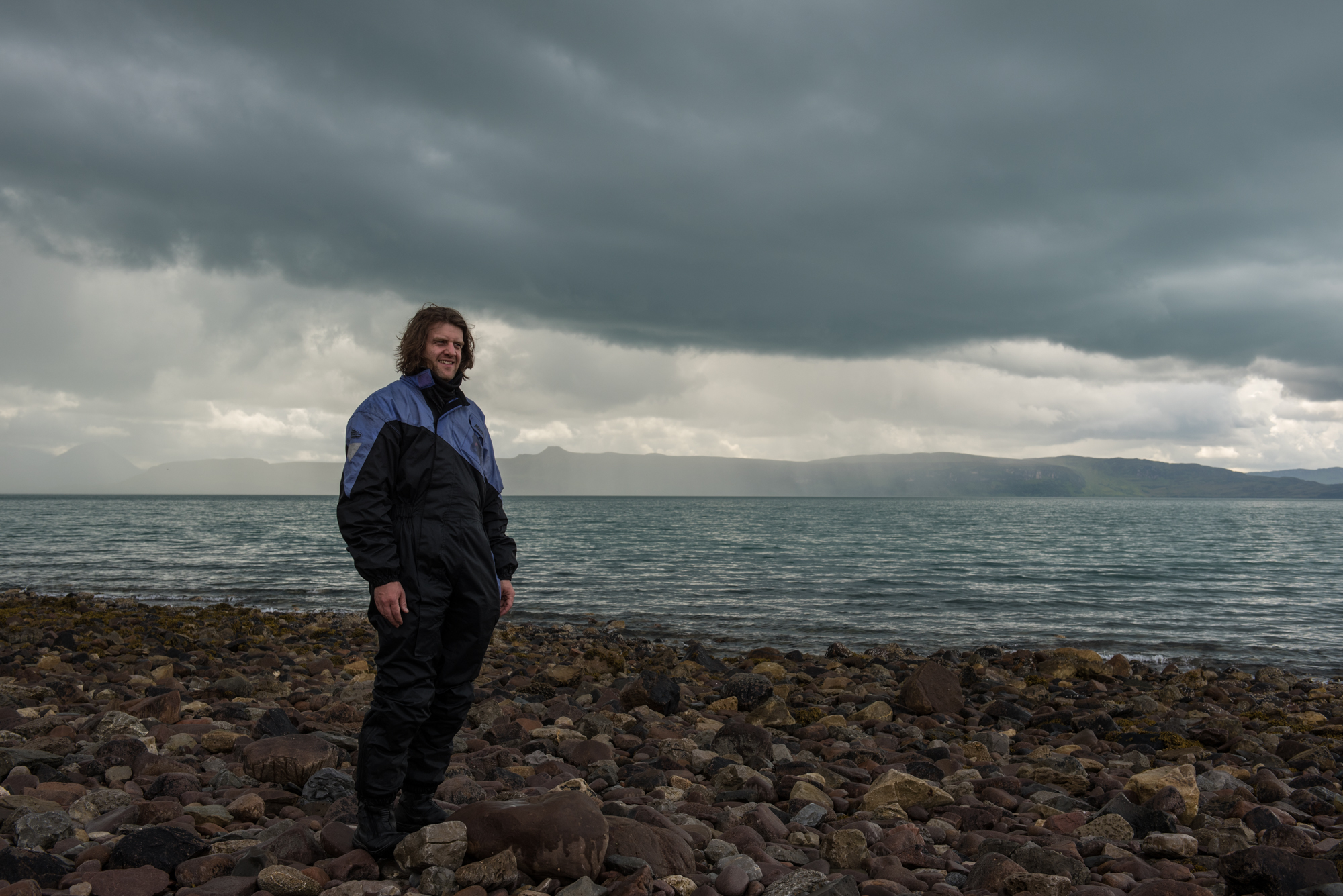 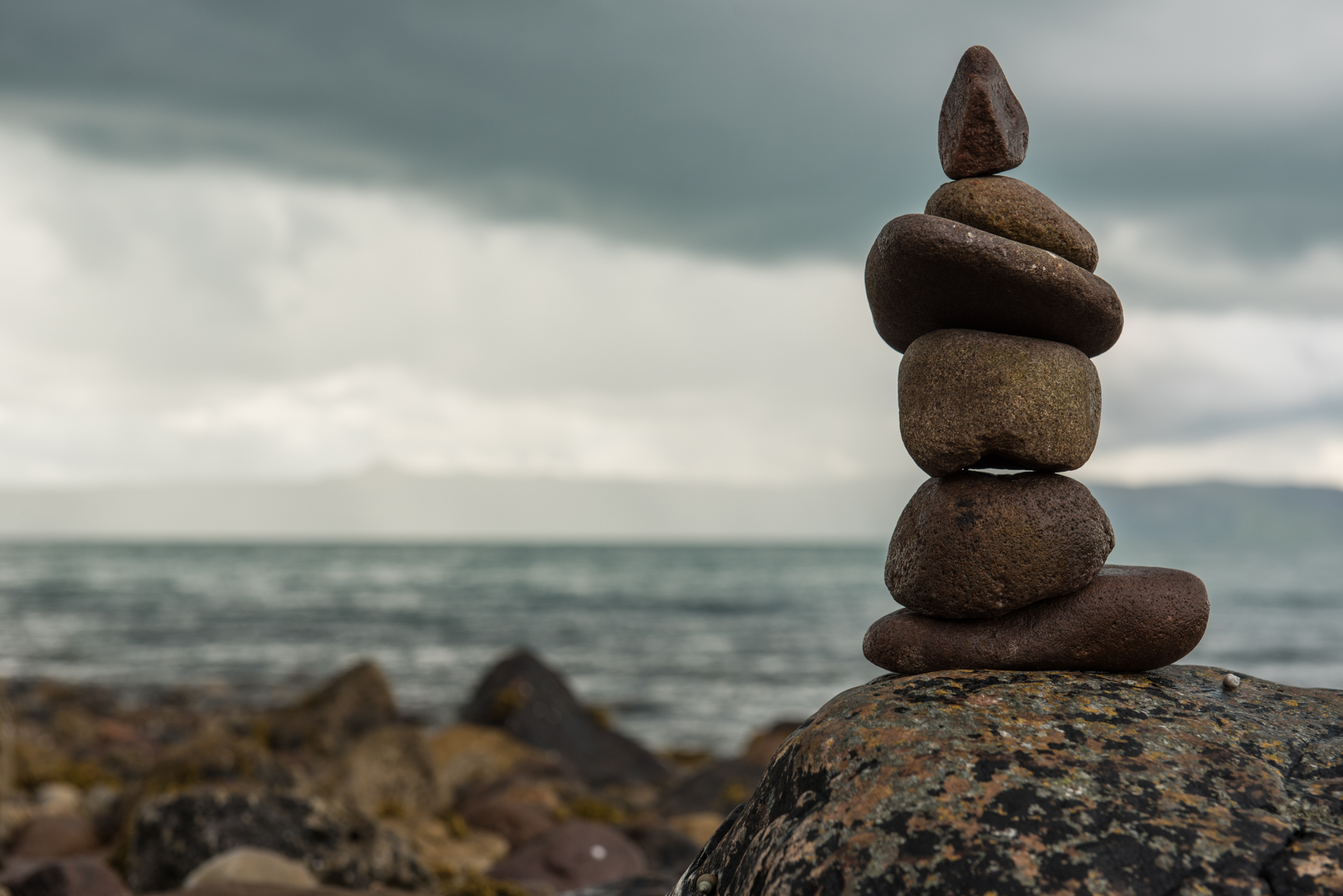 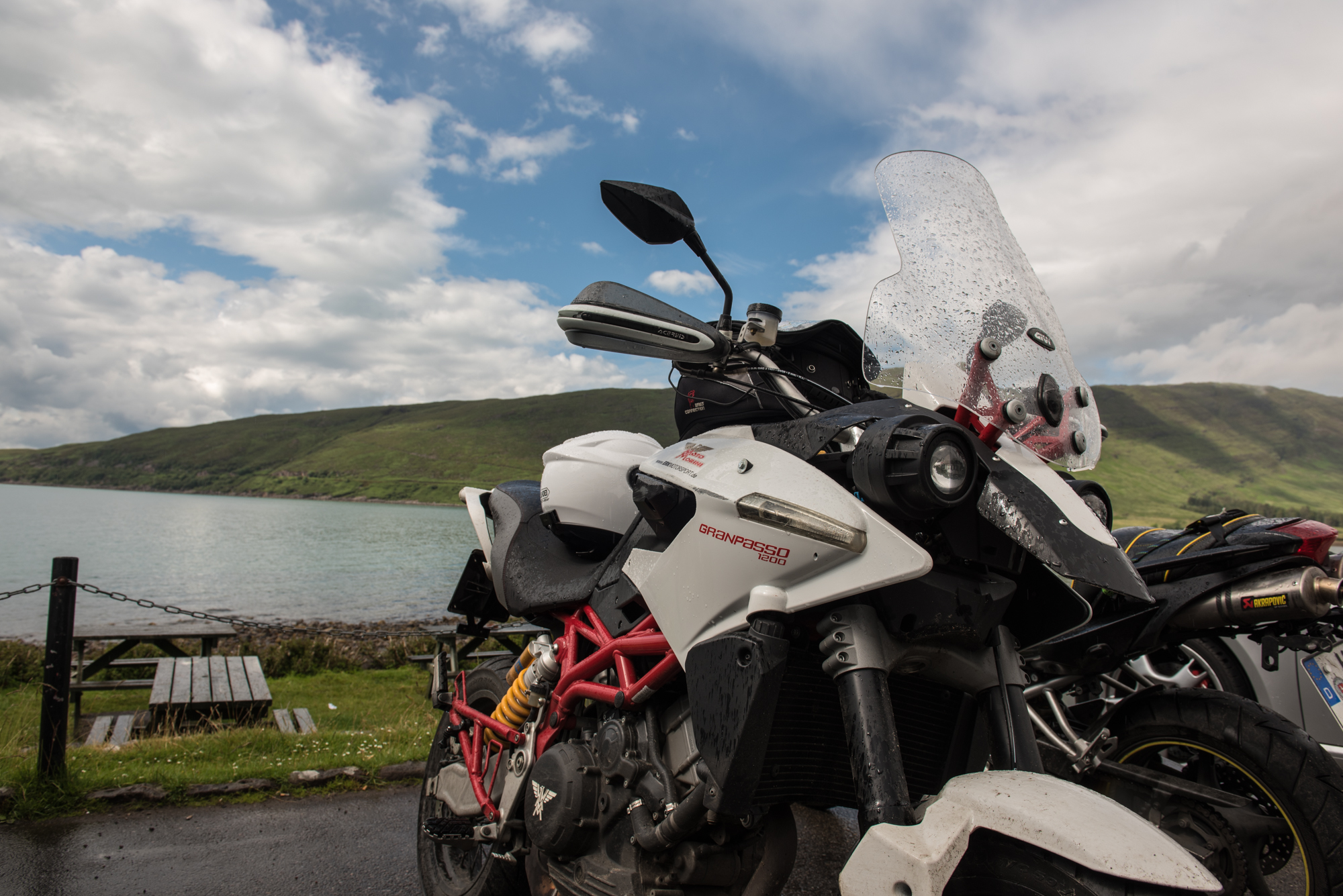 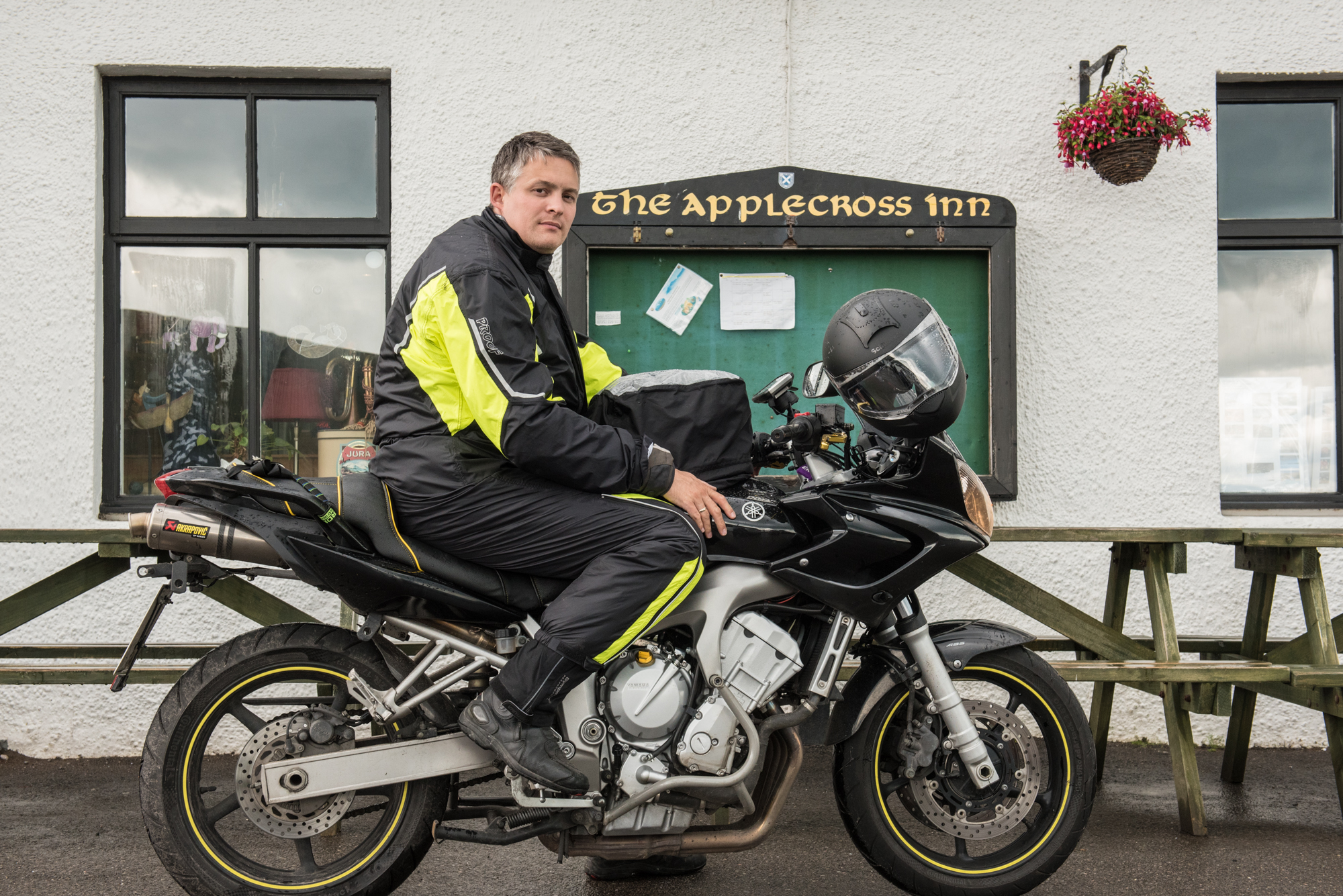 I laughed when I saw the BMW R1200 GS of a fellow rider. He had a freakin’ umbrella strapped to his bike! Well, we laughed, but he stayed dry. Clever guy… 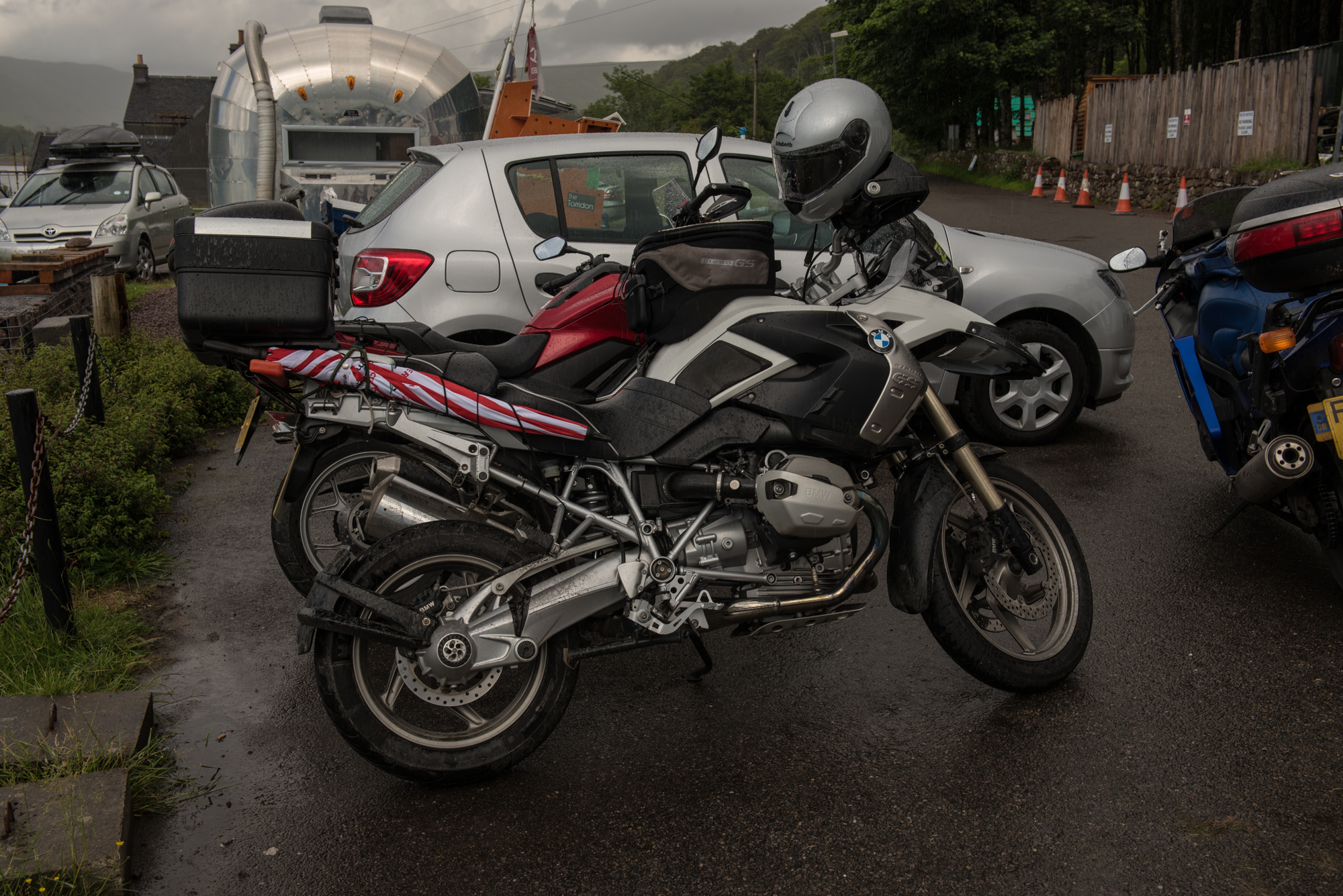 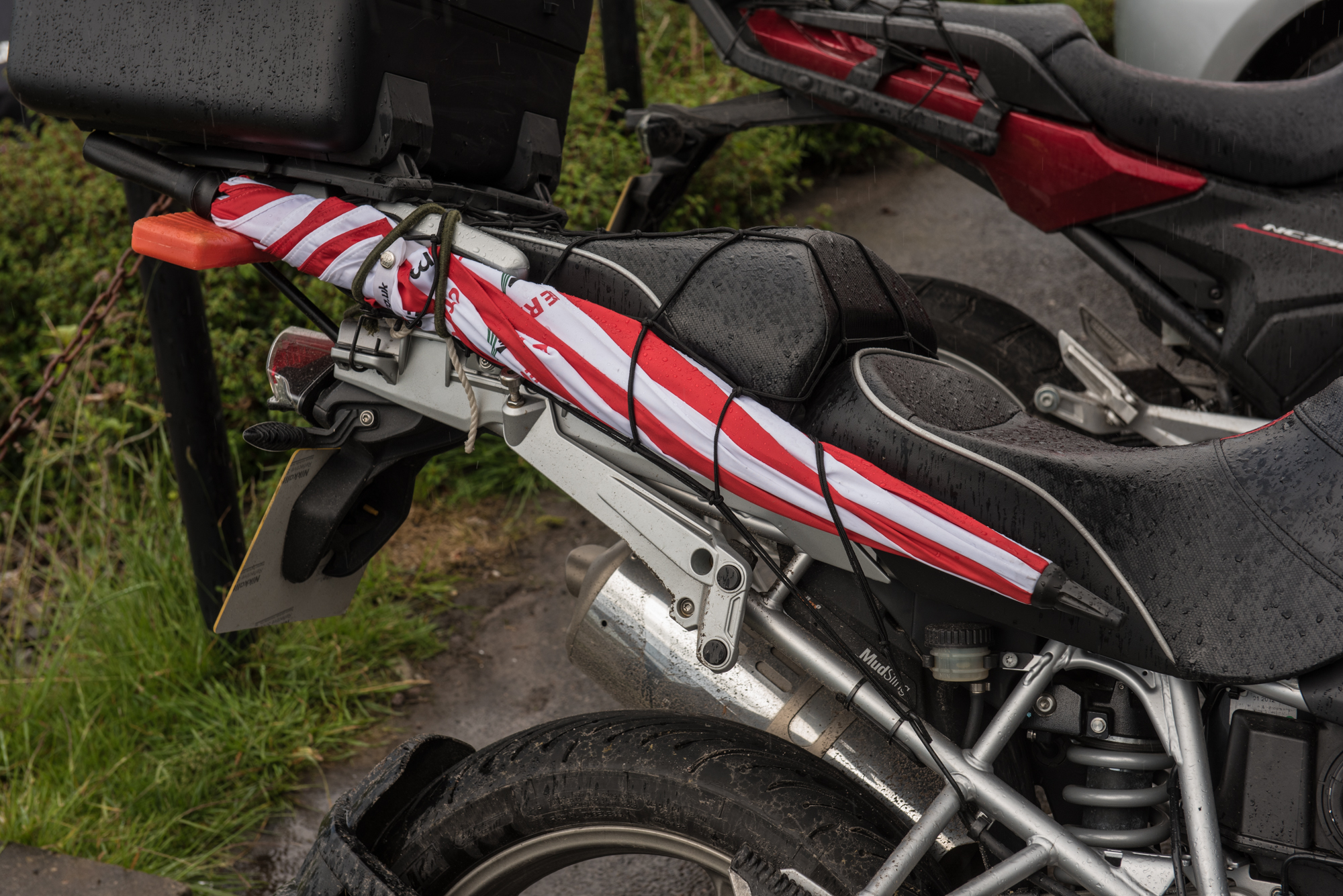 We took the coastal route back from Applecross. On the tour we made another photosession with me as the pillion rider.

Our final days in Scotland came. We headed back to Edinburgh and stopped in a forest near Glencoe. 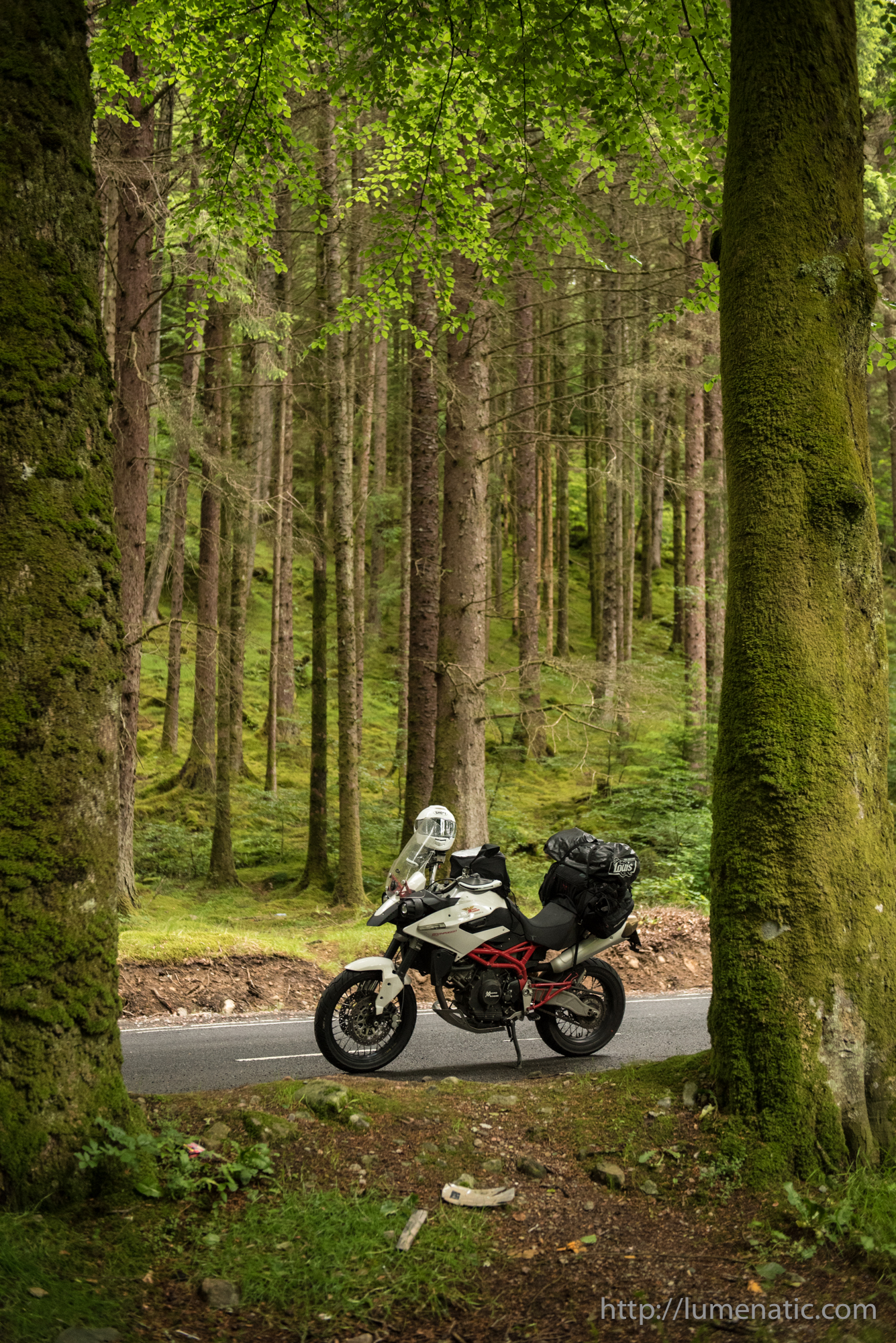 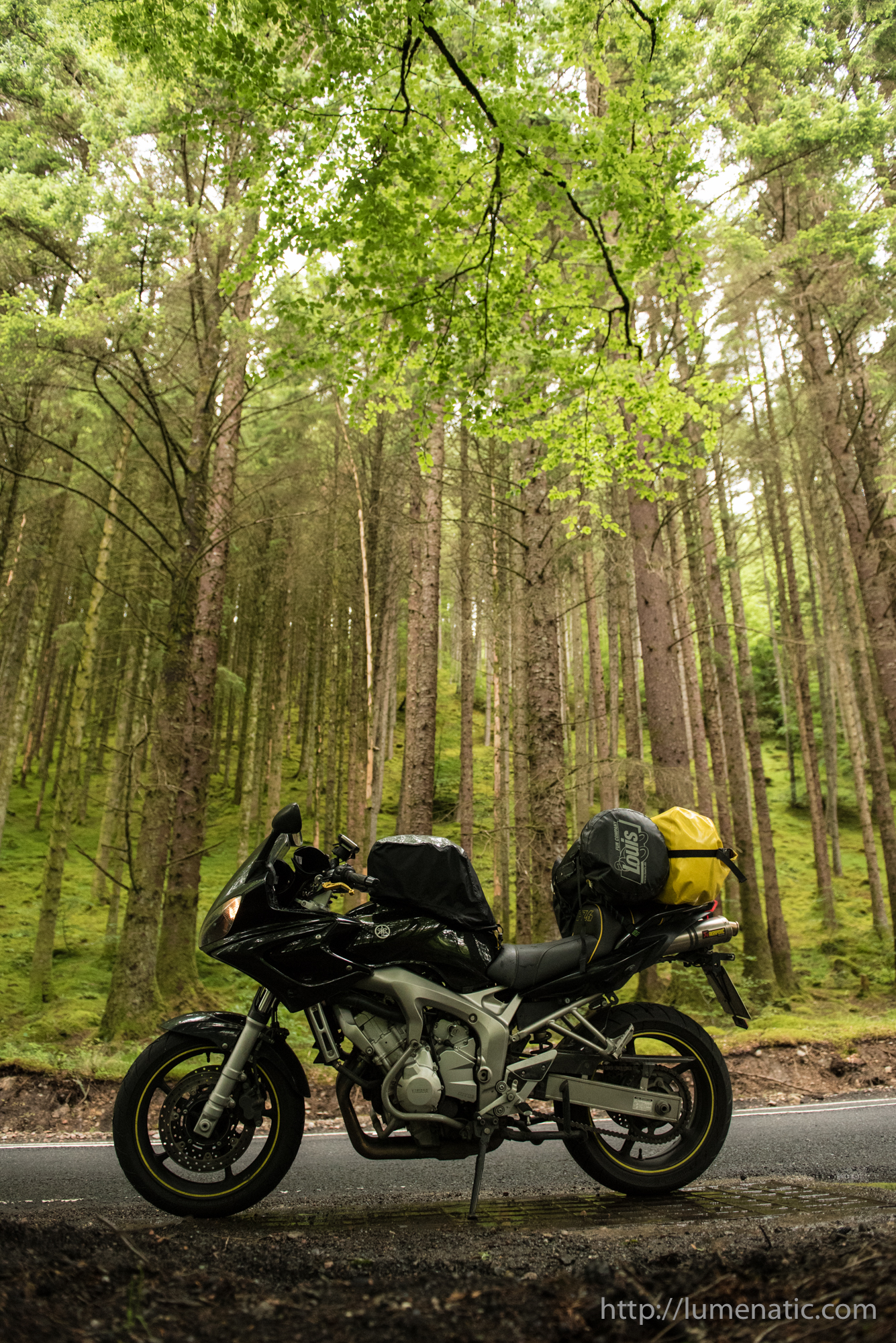 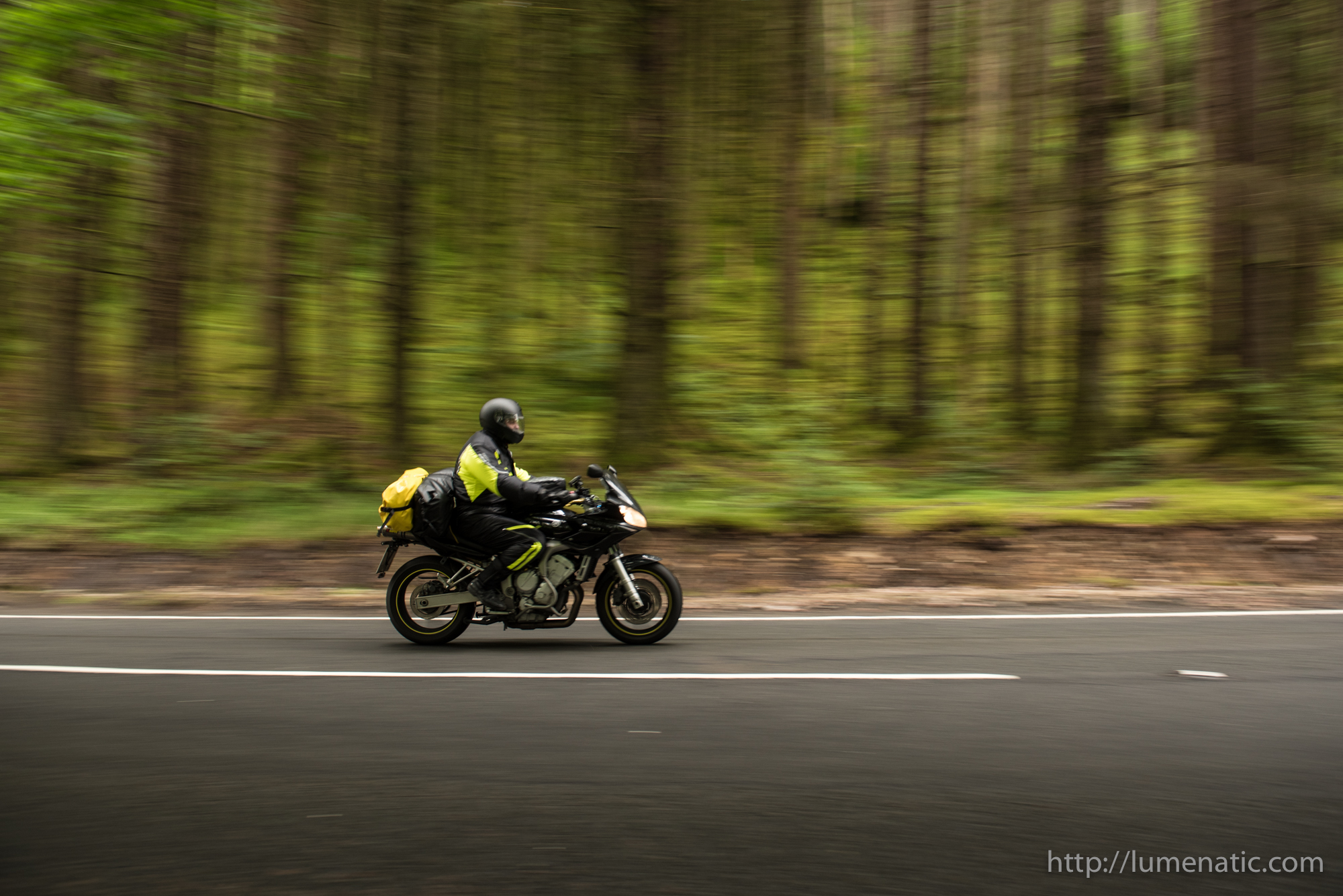 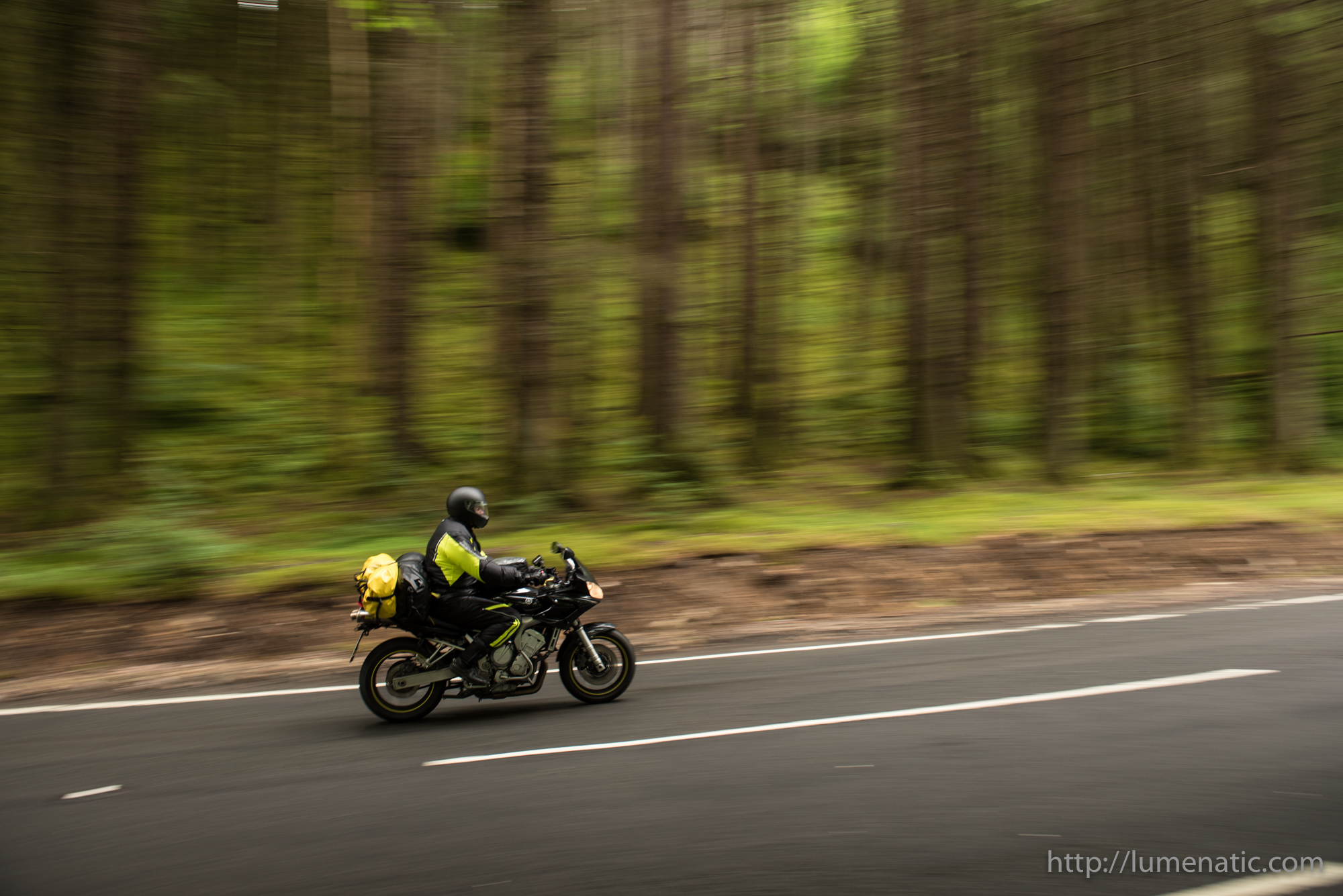 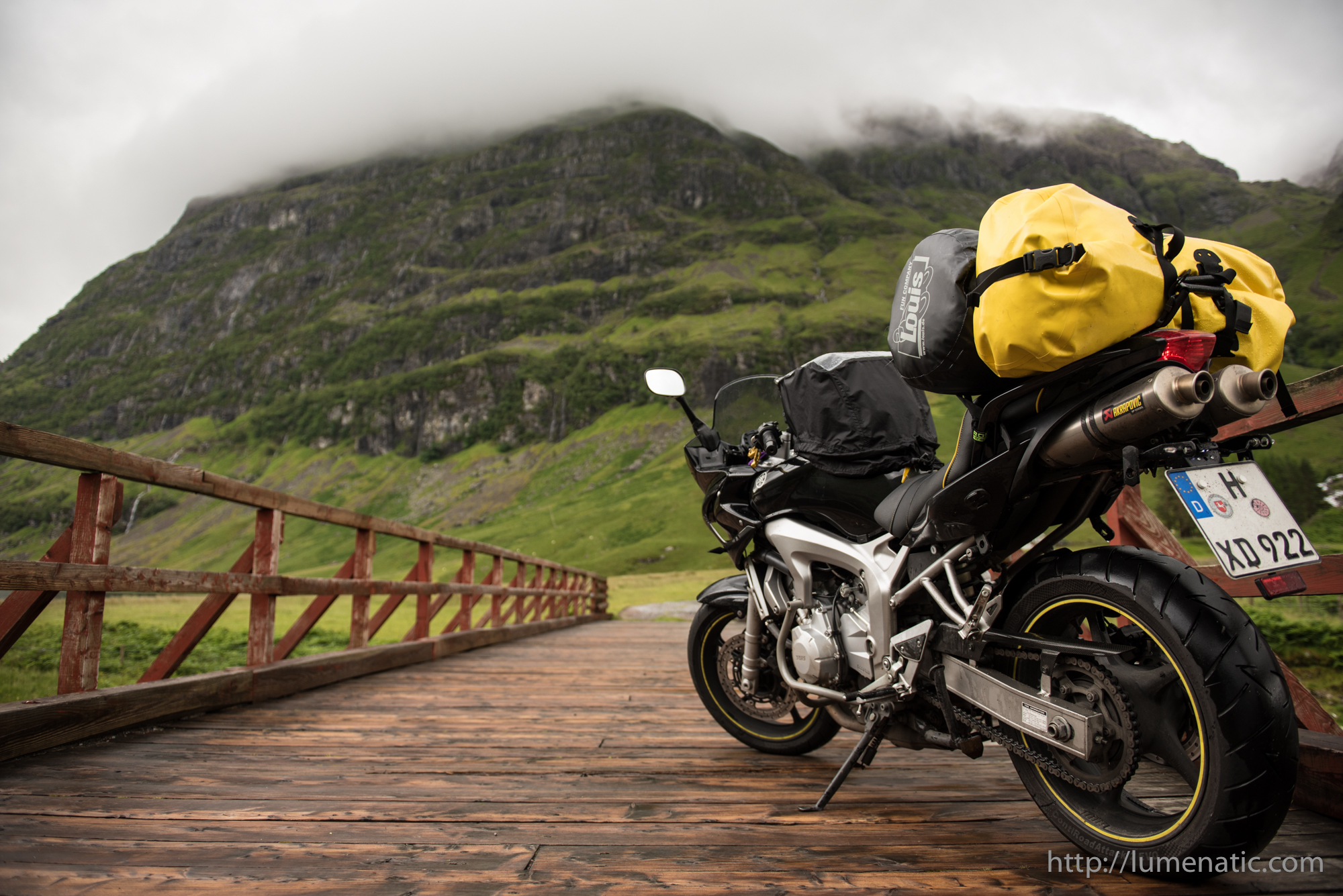 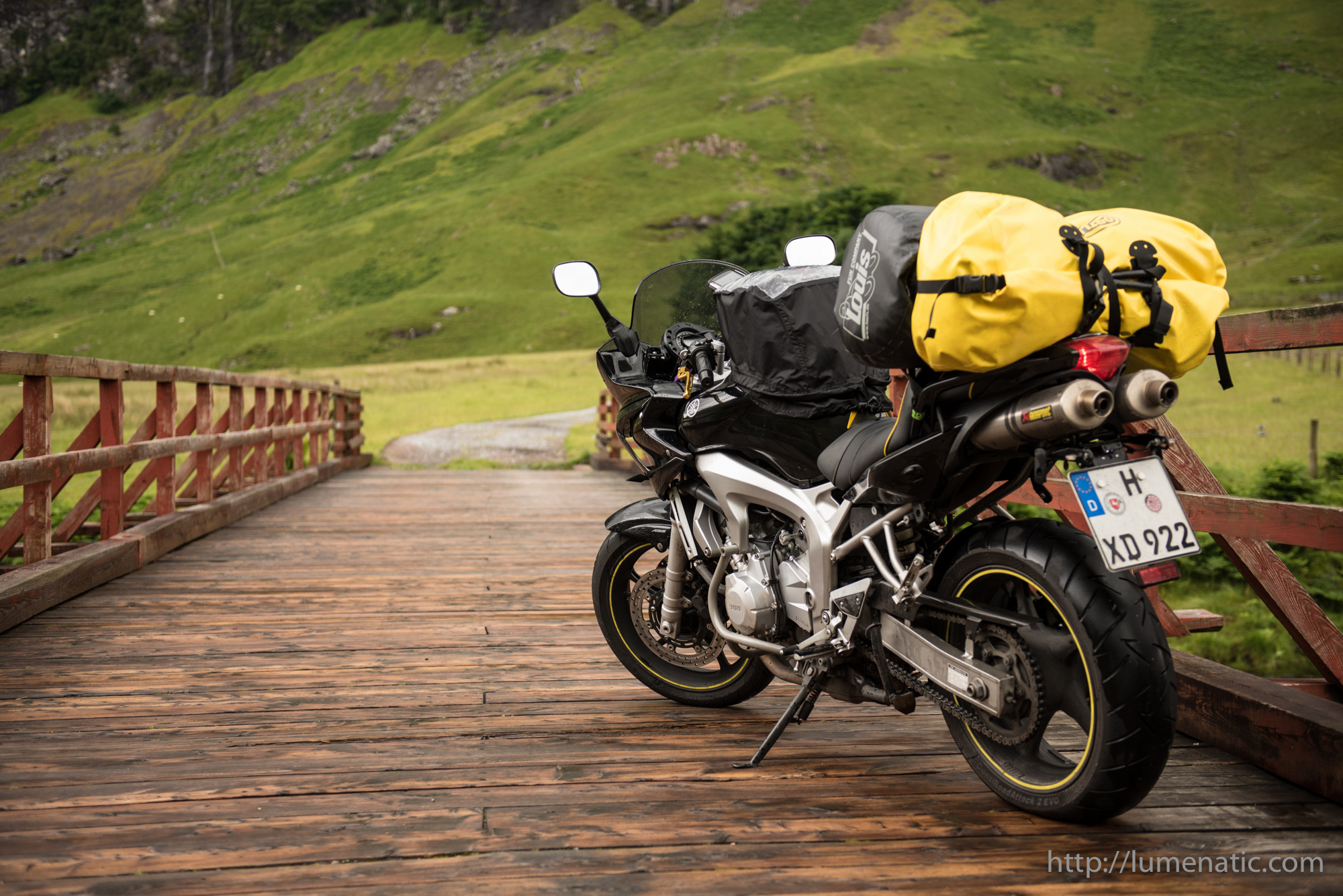 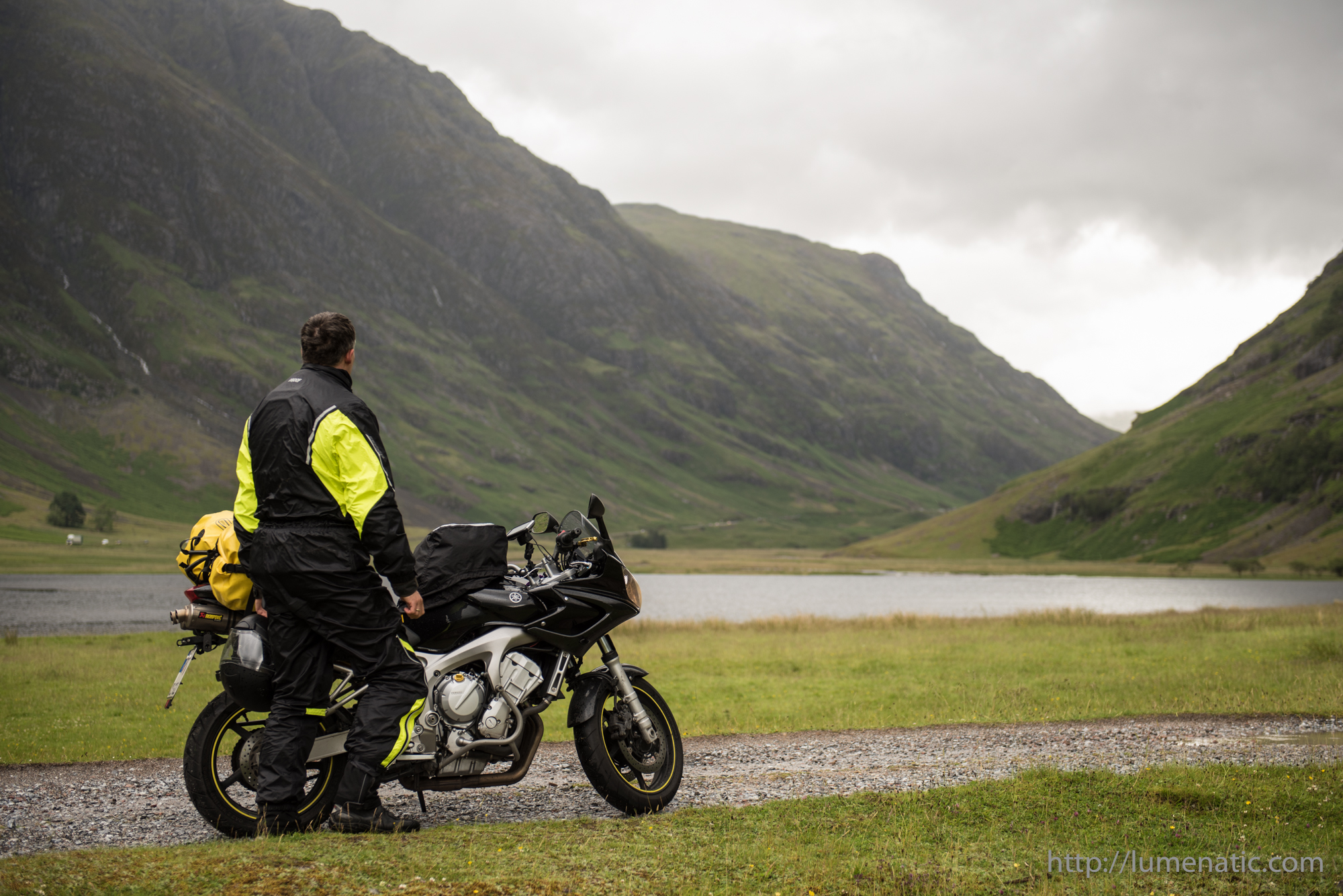 Before the trip Dominik told me “on _every_ motorbike trip there is a technical problem”. And he was right. Right after the last image in the gallery above we noticed that my back tyre went flat. I was able to drive the bike to a nearby hotel, but the tyre was wasted at that time. I found broken drill head to be the problem. How on earth did a broken drill wind up in my tyre ? You can see the little bugger below.

How wonderful – a flat tyre in the middle of nowhere on a Sunday. Some things can’t even get better. Dominik drove some kilometers to the next gas station and bought tyre repair spray. We fixed the tyre (the spray is a rubbery foam which is pumped into the type through the valve). That sealed the hole permanently and I could continue to Edinburgh. There a friendly workshop replaced my tyres on short notice (I had to change both, since they did not have Continental tyres, now I am riding with Bridgestone).

On our last day we returned to Newcastle to board the ferry to Amsterdam. From there it was another four hours back to Hanover.

Bottom Line: It was a fantastic experience driving through the Highlands and all the scottish isles. The people are super friendly, the roads are exciting for bikers and due to the Brexit the trip was more affordable than I had anticipated. We were a little unlucky with the weather (and cursed a lot on the trip), but now, sitting here on my computer and looking back, it is an experience I don’t want to miss. The next motorbike vacation will go to a place which is less prone to rain 😉